Like many other women with addiction problems, Nicole suffered long before she could find a program that would suit her needs 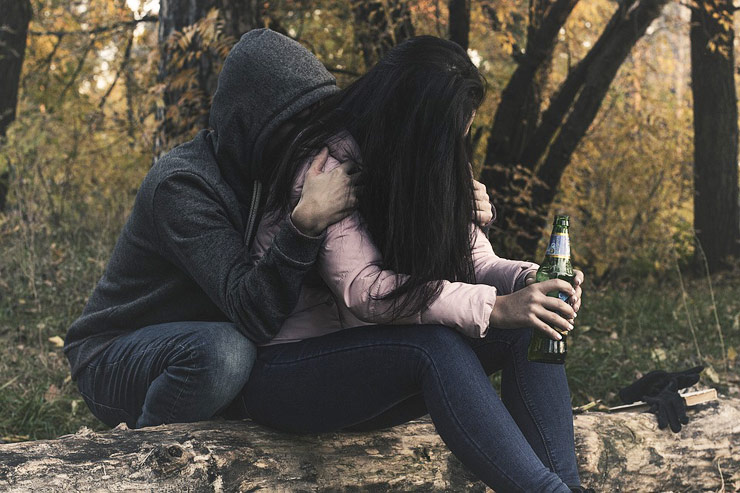 “From the moment of her arrival in the program, she felt she didn’t belong. All or almost all of the counsellors were men and of the thirty-odd residents, only five were women…” – License: CC

The story of Nicole S., from the moment she took her first opioid painkiller to her descent into the hell of injecting heroin multiple times a day, is undoubtedly different to what one might expect. Nicole did not come from a dysfunctional family. She didn’t grow up in a bad neighbourhood, experience poverty, or have violent parents or partners. Until her first encounter with drugs, her life story was quite commonplace. Her studies, her slightly boring job in a software company, meeting her future husband and her decision to become a stay-at-home mom after the birth of her first child, her everyday life in a quiet residential suburb… Nothing seems to suggest any predisposition to addiction.

Shortly after the birth of her third child, Nicole began to experience terrible back pains and over the weeks that followed, these pains only seemed to get worse. Her day-to-day activities and responsibilities, caring for her children; everything became an ordeal. Her doctor was sympathetic and understanding. He told her that with the medicines currently available, nobody should have to needlessly suffer with pain. So he wrote her a prescription for OxyContin (oxycodone), a powerful analgesic similar to morphine. The medicine turned out to be surprisingly effective, almost magical. Nicole was soon back to her everyday activities, but her days were now punctuated by the OxyContin pills she was taking.

Little by little, however, she started to take more of it, until she was regularly exceeding the prescribed dose. She tried to curb her intake, but within a few hours she would be gripped by an overwhelming desire for more. She needed what was fast becoming her drug.

Over time, she starts devising all sorts of ruses in order to get the hundreds of pills she now needs each month from her GP. Everyone was fooled; Nicole’s doctor, of course, but also her family and those closest to Nicole. To the outside world, she was leading a life that was simultaneously uneventful and quite busy. Always dutiful, always available for others, everyone adored her. To her daughter she was“a mom in whom everyone could confide; her children, other people’s children and even their moms”. Thanks to the pills, Nicole felt strong, in charge and in control. “These pills brought out a better version of myself, or at least that’s what I believed”. The awful bouts of back pain had become nothing more than a distant memory, but Nicole was now taking up to 20 pills a day, just to be herself.

For almost two years, Nicole managed to keep up appearances. But this equilibrium that was as fragile as it was false would one day shatter into a thousand pieces when it came up against reality. Prompted by a particularly tough withdrawal experience, she decided to talk to her husband about it. Once the initial shock had worn off, he promptly turned to the doctor who he immediately accused of drugging his wife. Her doctor defended himself. In his opinion, he was in no way responsible for the situation; Nicole had nobody to blame but herself and herself alone. She should have continued taking the doses as prescribed instead of exceeding the dosages and lying to get more and more.

This was a turning point. Faced with this impasse, Nicole promised to stop. But it was practically impossible. The addiction persisted, but her means of feeding it changed. Nicole changed. Instead of relying on prescriptions from her doctor alone, which was no longer possible, she began stealing the drugs from her friends. She also went to pharmacies to ask for repeat prescriptions for other people. This worked for a while, until one day when an employee called the doctor to check their prescription refills…

The symptoms of oxycodone withdrawal, as with other opioids, may include anxiety, panic attack, nausea, insomnia, muscle pain, muscle weakness, fevers, and other flu-like symptoms – Photo: licence CC

Nicole could not avoid the legal consequences of her behaviour but she did get off lightly. Instead of the prison sentence which could have been imposed upon her, the judge in charge of her case offered her the option of taking part in a treatment programme, which she took. But from the moment of her arrival, she felt she didn’t belong. All or almost all of the counsellors were men and of the thirty-odd residents, only five were women… and what women they were. “The only girls in the group were lost kids. Girls who, at 20 or 25 years old, already looked 40 due to methamphetamine abuse. I liked them well enough, but they were nothing like me.” Nicole managed to complete the programme nevertheless. Twenty-eight days of abstinence is a good result on its own, yet Nicole failed to even set foot on the road to recovery. She had no friends to confide in and no counselor with whom she could discuss the problems she was facing as a woman. And above all, she had to go four weeks without seeing her children or husband, who were not allowed to visit her.

When she got home, Nicole finally reunited with her loved ones. She felt drunk on freedom and the desire to live. But it didn’t last. The years that followed were punctuated by arguments with her partner and children. There were relapses, too. Her addiction was still there, looming like a silent intruder in this family home she had loved so much. Nicole started buying her drugs on the street, transitioning from prescription opioids, to street heroin, which was much cheaper. Then she graduated from snorting to injecting. Her husband and children were soon no longer in the picture; Nicole had left them.

She left her family and her cozy suburban house to go and live with a heroin dealer in a city-centre flat, a flat that was more of a hovel.

“I had truly reached rock bottom, but sadly I wasn’t ready to come back up yet. I knew full well that I had lost everything but I didn’t care. Nothing mattered except the next fix.” All day long, clients would file through the flat. They would pay, shoot up, then leave, from 9am to 5pm. Her new partner kept strict working hours, as if he worked in a bank.

He didn’t hit her. He didn’t even touch her. At night, he would cozy up next to her and they would both stay like that, motionless like two little spoons in a dirty drawer, until the morning’s first fix.

The end of the road

To ensure she had a continuous supply of heroin, Nicole herself started dealing. Not only in the flat when her partner was absent, but also in the street or even in the homes of her customers. But she knew that this couldn’t last. She no longer tried to hide and ceased being careful about her choice of clients. It felt like she was at the wheel of a car travelling in a straight line at break-neck speed with her eyes closed. She was waiting for the wall.

One day, very early in the morning, the door to the flat was literally smashed into pieces. With cries of “Police, Police!”, ten or so masked and armed men came bursting into their lives, which had really become no more than an existence by that point. And later, much later, the questioning began. Nicole hid nothing but quickly came to understand that her partner was taking the fall. The organization, the selling, the contacts; he took responsibility for all of it. She had only been there to consume. When I found myself at the police station, I realized that chapter of my life was over. But strangely, despite the dreadful feeling of loss, I started to see a glimmer of hope.” To avoid a prison sentence, she agreed to sign up for a rehabilitation programme. A new centre had recently opened with a programme specifically for women. Nicole immediately felt an improvement after the first ten days of detox. The counselors were all women and they listened to her.

She felt better understood and more accepted. Her overwhelming sense of guilt began to subside. She knew however that there was much to do to make up for lost time. The road ahead would be long and full of tests and the first of these tests was waiting for her that afternoon.

Her husband and two of her children were coming to visit her. The third was not yet ready. One day, maybe