In the major slums of Nairobi, Kenya, substance abuse has been rising dramatically among children, youth and women, causing alarm among stakeholders since those concerned belong to an age group upon which the metropolitan city depends heavily for its development and growth.

Worried about the health of millions of young people involved in drug consumption, the President of the Republic of Kenya requested the line ministry and Nairobi’s local authorities to join their efforts with local stakeholders, civil society organizations and the private sector to help and assist these young people who are called upon to play an important role in the country’s future. (Source : Standard News Paper online edition) 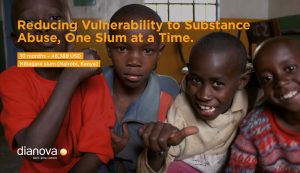 The project “Reducing Vulnerability to Substance Abuse, One Slum at a Time” proposes a drug prevention, health promotion and capacity building approach which is grounded in peer education, i.e. an approach based on the reality that many young people make changes not only based on what they know, but on the opinions and actions of their close, trusted peers (people who share similar social backgrounds, age and life experiences).

The project will be multifaceted, with a cohesive action from all parties and taking account of the Sustainable Development Goals, with the objective of replicating an initiative carried out successfully by the Slum Child Foundation in Korogocho, one of Nairobi’s major slums (Cf. footnotes).

The project is targeted to reach schoolchildren, students and teachers from Kigabare’s main schools through an approach implemented by motivated facilitators originating from the region’s slum and having received a training from Slum Child Foundation.

The project aims primarily to achieve pedagogical objectives (identification of strategies to resist group pressure, information on substances, etc.) but its main ambition is to create a participatory process involving youth leaders and educational teams with a view of creating clubs or support groups dedicated to addressing the substance abuse problem.

To strengthen women peer-to-peer support groups and to provide 4,200 women and their families (200 directly, 4,000 indirectly) with the opportunity of empowering themselves and defining their own strategies through capacity-building for a stronger education and drug prevention within the community.

To strengthen youth peer-to-peer support groups and to provide 300 young people and their families (up to 10,000 people concerned indirectly) with the opportunity of empowering themselves and defining their own strategies through capacity-building for a stronger education and drug prevention within the community.

To strengthen children peer-to-peer support groups and to provide 200 schoolchildren and their families (5,000 people concerned indirectly) with the opportunity of empowering themselves and defining their own strategies through capacity-building for a stronger education and drug prevention within the community.

To strengthen training for 150 teachers with the object of monitoring the implementation of support groups and to reinforce their skills and capabilities in matters related to drug prevention, with the ultimate goal of reducing substance abuse within the community.