Through the “Listen First” campaign, Dianova invites readers to share the “adventures” of the Duran family whose experiences reflect the questions and doubts of thousands of real families 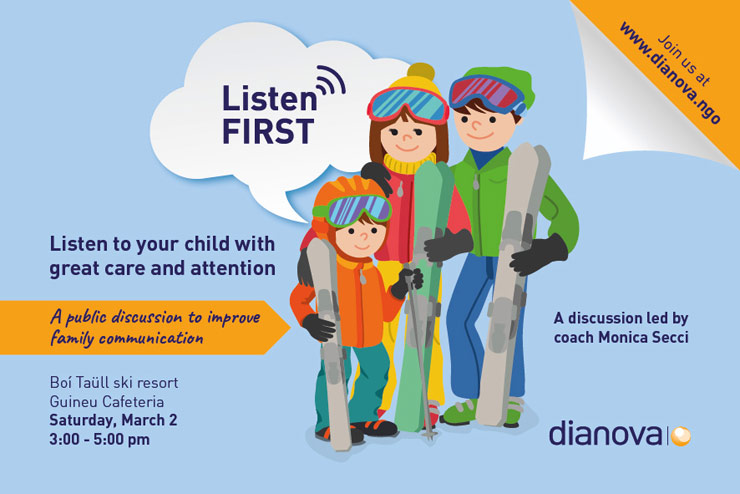 Presentation of the Duran Family

Let me introduce you to the Duran, a nice and modern family, as there are thousands of them. The parents are Iria and Marc. Only ten years ago, they were a young couple who loved life as much as they did one another. They would both enjoy hanging out with friends, celebrating whatever event throughout memorable nights and well, simply having fun. But all of this was before. Everything’s changed today. What happened to them comes in just three letters. Nil. He’s now a cute little boy, boisterous too, who just happen to have celebrated his tenth birthday.

Nil was not an accident as one might put it, but a very much wanted child. In fact, as soon as they met, or shortly thereafter, Iria and Marc agreed to develop together a family and professional development plan that was as finely tuned as a Swiss watch. This plan was articulated in four distinct and successive phases. One, we complete studies and get adequate jobs. Two, we have fun. Three, we still have fun. And four, we make a baby (and we raise it).

Unexpectedly, they both rushed through the first three phases of plan much faster than initially devised and our carefree young couple became overnight the “Duran family”. Marc and Iria were as ready as they could possibly be (not much, that is) and they knew they would have to say goodbye to most of their previous life of fun. Baby Nil’s arrival went smoothly and today Iria and Marc are caring young parents who pay great attention to their child’s development and believe that most problems can be settled with kindness and understanding.

Support Us. Make a Donation

Little Nil is a whirlwind of energy this morning! He woke up with a huge grin and, sitting at the breakfast table, he’s now a bit of a chatterbox, with thousands questions to his parents. This day is going to be special because the whole family is about to head out of town for a weekend getaway at the gorgeous Boí Taüll ski resort in the Pyrenees. Nil is now unable to stand still for one moment; he hasn’t seen snow for far too long and, most importantly, for the very fist time he’s going to step on the brand new snowboard he’s just received for his birthday!

Tobogganing or making snowmen is good for the little ones! And Nil already thinks himself a seasoned skier – last year he’s been able to successfully link his first turns! But what he really likes is snowboarding. During their last skiing holidays, he was gaping in admiration and delight at preternaturally talented pre-schoolers whizzing past and pulling a 360 at the side of the piste, with grownup’s helmets and goggles covering half their faces. Waaooww! For Nil, it was totally wicked!

For months afterwards, Nil has been begging and nagging his parents in order to be able to get his hands – or rather both feet – on a snowboard. Eventually, a few days ago, his dream came true. The board now rests against his chair, and with its design of stylized flames over a black background, it is the world’s most beautiful object.

While sipping their coffee, Marc and Iria are won over by the enthusiasm their son who continues to chat endlessly. As Iria grazes her spouse’s hand they both smile tenderly. They think the same thing: this weekend in the mountains, what a good idea! Marc is delighted to introduce snowboarding to his son, even though he himself has not practiced for years. Ten years old is the right age to start, he muses.

Iria is simply happy to see her two men so close at the dawn of a perfect day. It’ll be good for us to forget our daily routine, she thinks.

This week-end outdoors is however a bit of an exception. For some time now, it seems that the only things that really interest little Nil are his video games. He could spend hours staring at his tablet’s screen. I feel like we’re only talking about that, Iria thinks. Discussions about Nil’s time on his tablet have become a depressing part of family life. “Nil, leave the tablet and come to table!”; “Nil, we have to leave, close this tablet!”…

This kind of discussion, if we can call it a discussion, can happen many times a day. “Yeeeaaahh Mom, just a sec’” But hey, when the “second” turns into five minutes, it quickly becomes kind of tiring. And when we’re tired, we get upset…

The proliferation of screens in our society is such that children are constantly exposed to them. Whether we talk about television, tablets or mobile phones, all these screens are part of our daily lives, however, when used in excess, the little ones are often those who pay the highest price.

According to the World Health Organization, excessive use of electronic devices of this type could cause eye damage in children such as eye fatigue, dry eye sensation, blurred vision, or double vision. In addition to these health problems, abusing screens can cause the child to lose interest in other activities such as outdoor activities or sports, and thus cause weight gain.

According to a report from Sant Joan de Déu Hospital, at age 10, some 30% of Spanish children have a mobile phone, and 70% at age 12. In addition, one in three children spends more than three hours a day connected to the Internet. According to a survey by Public Health England, over four hours per day, screen time might trigger emotional problems and lower self-esteem among children. 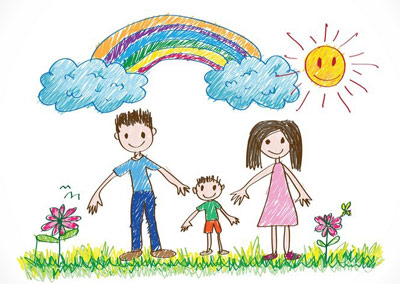 Neither Iria nor Mark want to get upset, so by “negotiating” with their son, they’ve been able to reach an agreement. Nil has promised to reduce his time on the tablet at 30 minutes a day (after he’s done his homework of course). After achieving this important concession and witnessing their child’s seriousness over the days, both parents have agreed to give Nil the gift of his dreams – the snowboard – and to spend a week end’s initiation to snowboarding in the ski resort of Boí Taüll.

At the back of the car, Nil is unable to sit still. From downtown Barcelona, ​​the road to the station is not very long and they should get there in a little over three hours. Yet, all the way, Nil doesn’t stop asking questions. And what type of snow awaits them, what kind of hotel they will stay in, which slopes they will try today and son on and so forth.

At ten years of age, Nil already fancies himself walking in the tracks (in a beautiful powder snow) of his hero Regino Hernández, bronze medal for Spain in snowboard cross at the Olympic Winter Games in Pyeongchang (he pronounces “Pewtcha”) last year.

The College of Opticians and Optometrists of Spain supports the recommendations of the American Academy of Pediatrics: 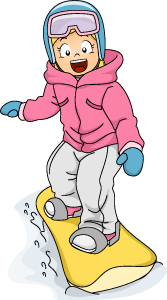 And it’s the arrival at the station! Nil is so excited that he rushes out of the car with his board, his shoes and all his equipment. The young couple now smiles at seeing him so excited, but they first have to go to the hotel, store their things and finally go to the equipment rental shop (both Iria and Marc need to equip themselves). All the while, Nil is impatient and does not hold up. Marc casts a worried look at his spouse. Both have detected the first symptoms of “I want this and I WANT IT NOW” and the huge tantrum that might occur… They have a little trouble keeping their cool, but they promised themselves that the day would be perfect, without discussion or argument. And they keep their promise.

That’s it, they are at the top of the slopes. Iria and her son are on their snowboard, while Marc chose skiing. The first moments are difficult. Although Iria quickly found back the old positive feelings, Nil on the other hand spends much more time with his buttocks in the snow rather than standing on his board. He now realizes that snowboarding does not have much in common with skiing. With a snowboard, you can’t go snowplowing to reduce your speed nor can you “walk” the way you do with skis.

Basically, when you go snowboarding there’s only two possibilities, you can slide nicely or spend your time sitting in the snow. And what Nil does most is the latter rather than the former. In short, he now comes to realize that it will take ages before he’ll be able to compete with his hero, years, centuries maybe! He’s now flushing and getting angry and his eyes are brimming with tears. Next to him, his mama continues to show him the right gestures, with calm and patience.

Nothing helps though. Suddenly, he explodes with anger: “I’M FED UP”. Nil tears off his helmet, he’s now red with frustration and grief. “IT’S TOO HARD, I CAN’T DO IT”. They began the lesson hardly an hour ago but Nil’s mama and papa decide not to push him for fear that he might give up completely. The snowboard lesson is over, at least for this morning!

At the bottom of the slopes, after he’s taken off and shouldered his skis, Marc now looks regretfully at his spouse, slowly moving away towards the hotel with their son, both holding their snowboards. Iria gently puts her hand on the nape of the child’s neck, but as Marc sees the boy’s shoulders twitch, he now guesses that he’s still shaking with tears.

He is heartbroken. With all the empathy of papas, he simply can’t bear to see his son crying. He would like to do things well, but sometimes he feels overwhelmed. Did they do well to stop the activity so quickly? Should they have insisted that Nil persevere, even if it meant for him falling in the snow again and again?

Several hours have passed and the whole family is back in the hotel room. A smile is now crossing Nil’s face and he’s laughing at the memory of his innumerable falls, his buttocks in the snow. His anger vanished, he can’t wait to get back on his snowboard! Their day was quite emotion-filled. They went through enthusiasm, helplessness, frustration, anger and sadness. But for Iria, Marc and Nil, there’s one feeling that now prevails, the satisfaction of sharing something they like and the pleasure of spending time with one’s family.

Sitting at the breakfast table the next morning, the whole family plans their next adventure. Follow us to know their destination.

Children’s brain is still immature, so it can be difficult for them to manage their emotions. Frustration is an emotion inherent in any learning process: children realize that it is impossible for them to perform a given action (because they do it badly, because they are insufficiently trained, because they do not have the right tools …), so they become frustrated. Then frustration triggers anger. However, anger is an emotion that subsides when children are accompanied.

As parents, it’s up to us to do it! Here are some tips to help your children grow well: