From the 4th to the 8th of March, Dianova launches the #YourVoice+ campaign to help eradicate the multiple barriers that prevent girls and women from accessing a real equality in education and workplace 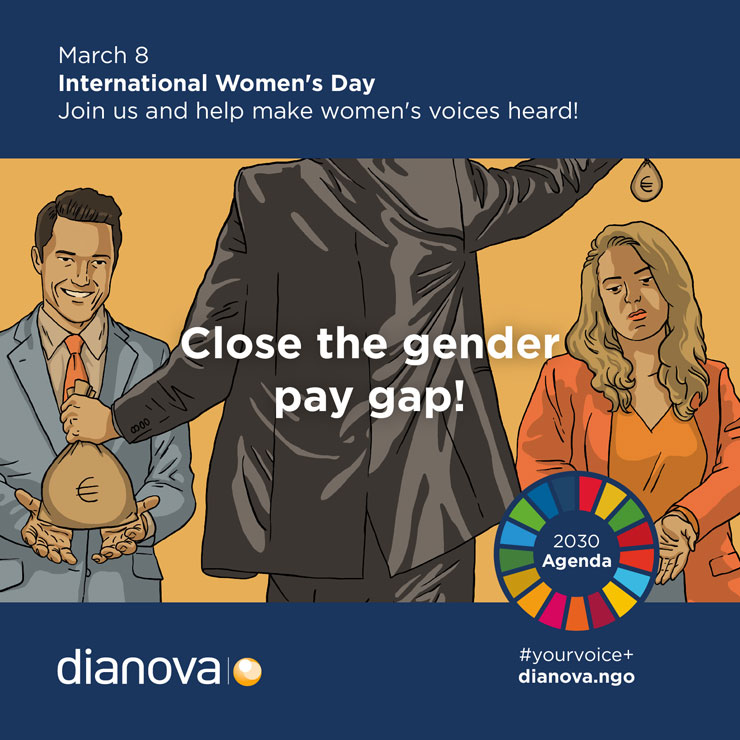 “Creating fairer, more sustainable and more equitable societies will happen with the full participation of women, or it will not happen.”

Press release – Barcelona, 4th of March 2019: all across the world, various barriers are still limiting women’s access to work or the education they are entitled to. Even in the most developed countries, where a lot of work has been done to ensure equal gender rights, there still exists a considerable pay gap between men and women — for the same type of work. A study by the United Nations estimates that for every dollar men make, women make 77 cents, i.e. a gap of 23%.

88% of countries worldwide have restrictive laws against women at work; 59 countries have no law penalising sexual harassment and 18 countries can legally forbid women from working. Research has shown that the benefits of gender equality in the workplace could be even more beneficial that it was originally thought. In a recent interview, IMF Managing Director Christine Lagarde said that if some countries could abandon their discriminatory laws against women and take adavantage of their competitive skills, it coule boost the size of their economies by 35%. Besides, according to the UN, if women were to contribute the same as men to economy development, the global GDP could see an increase of 26%.

Regardless of all the effort and progress that has been made in the last decades, today there are still more girls than boys that don’t receive an education. According to a recent UNESCO study, out of 63 millions of kids between 6 and 11 y.o. having no access to education, 54% are girls, in comparison with 58% in 2000. Girls’ education and training represents an essential goal for society development: it has been shown that better-educated women are more healthy, more likely to make their own choices about when they marry and how many children they’ll have, and lastly, they participate more actively in community life and in their countries’ economy.

Achieving real equality in terms of education, pay and economy participation could be a long-term process. Which is why we all need to contribute to advancing this goal. Some countries’ national policies need to change. It is essential to abandon discriminatory laws, to have the principle of gender equality embodied in the Constitution, to improve transport to make it easier for women to get to work, to establish free or low-cost childcare facilities, to change inheritance laws (in some countries, men only can have a right to full inheritance), etc.

“We all have a duty to act. We can no longer afford to lose the talents and skills of millions of women. Creating fairer, more sustainable and more equitable societies will happen with the full participation of women, or it will not happen.” Montse Rafel

#YourVoice+ aims to give both men and women a voice in order to help to achieve the Vision of the 2030 Agenda: a world ‘in which all men and women benefit from full gender equality and the legal, social and economic barriers to their empowerment have been removed.’

Join the campaign and answer the following question: what, according to you, are the most important obstacles that prevent women from accessing education, training, equal salary and professional opportunities?

Answer this question in a post, a short video or a podcast, and upload it to your favorite social media with the hashtag  #YourVoice+

Join the debate and make women’s voices be heard

Dianova International has Special Consultative Status to the Economic and Social Council of the United Nations (ECOSOC), it is a registered civil society organization to the Organization of American States (OAS) and an official partner of UNESCO. Dianova is also a member of the executive boards of: the Conference of NGOs in Consultative Relationships with the United Nations (CoNGO), the World Federation of Therapeutic Communities (WFTC), the NGO Committee on Mental Health, and the Vienna NGO Committee on Drugs (VNGOC).