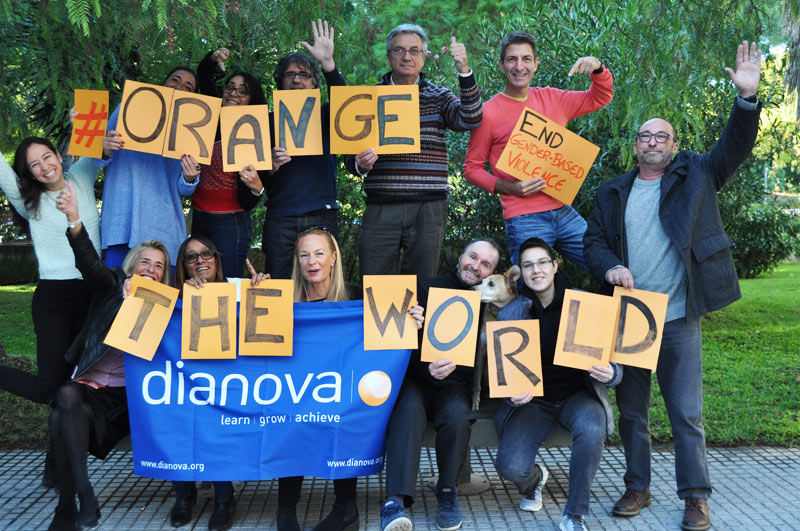 “We can unite our voices against violence and fight for human rights in the workplace, in schools, on social media etc.”

On the 25th November Dianova will take part in the UNITE  initiative from the UN, a 16-day campaign that seeks to raise awareness about the abuses and aggressions suffered by at least 800 million women and girls around the world.

November 2017 –Violence against women has become a global pandemic and some studies have suggested that up to 70% of women have, at some point in their lives, suffered some type of physical or psychological abuse. For this reason, and with an aim to raise awareness of this grave situation in society, businesses and among legislators, on 25th November, International Day for the Elimination of Violence against Women, Dianova International will kick start the annual 16-day activism campaign organised by the UN.

For Montse Rafel, director of Dianova, it is vital that governments, the private sector and civil society organisations work together to identify what is needed and implement policies and measures designed to protect women and girls.

A Silent ‘Colleague’: Violence against Women in the Workplace
School, a Place of Violence and to Prevent Violence
A call to End Gender-based violence
Campaign’s Details

The initiative, whose motto is “No one gets left behind”, aims to promote activities that will help put an end to the aggressions suffered by at least 800 million women and girls around the world.  One of these activities is “Paint the world orange”, which invites people to share messages and photos of themselves wearing clothes of this colour (which symbolises a more optimistic future with better opportunities for all women) across social media using the hashtag #OrangeTheWorld.

Violence against women occurs in all areas of life, such as with family, partners, at work, in education and even when it comes to their health etc. Dianova proposes that these types of abuses are primarily related to patriarchal and sexist social structures, which not only work in favour of violence, but also perpetuate inequality between men and women, for example the gender pay gap that stands at  23% worldwide, according to the International Labour Organisation.

Despite this bleak outlook, it is possible to make a change: violence against women and girls is preventable. “Never has there been a better moment to take action. Right now men and women from all over the world are, more than ever before, becoming aware of their responsibility and ability to put an end to this sort of violence. We have to demand that governments put in place laws to protect women. We can unite our voices against violence and fight for human rights in the workplace, in schools, on social media etc.”, says the director of Dianova.

The 16 day campaign, which will end on the 10th December, Human Rights Day, is a social campaign that will also include events such as lighting up buildings and landmarks in different countries with the colour orange to attract the attention of the whole world, as well as the official UN commemoration of the International Day for the Elimination of Violence against Women, which will take place on 22nd November.

UNiTE is part of the sustainable development goal #5, which recognises gender equality and the empowerment of women. This goal forms part of the 2030 Agenda, made up of 17 objectives, which was adopted by the 193 members of the UN in 2015 with the aim of improving living conditions, the planet and economic prosperity.

Dianova is an international NGO which comprises associations and foundations operating in the Americas, Europe, Asia and Africa. Dianova’s member organizations contribute to the development of individuals, communities and organizations through a variety of programmes and interventions in the social, health and humanitarian sectors.

Dianova International has Special Consultative Status to the Economic and Social Council of the United Nations (ECOSOC), it is a registered civil society organization to the Organization of American States (OAS) and an official partner of UNESCO. Read more