In the workplace as elsewhere, victims of harassment are sometimes reluctant to report their abuser. Then, once we are made aware of it, how can we help them? 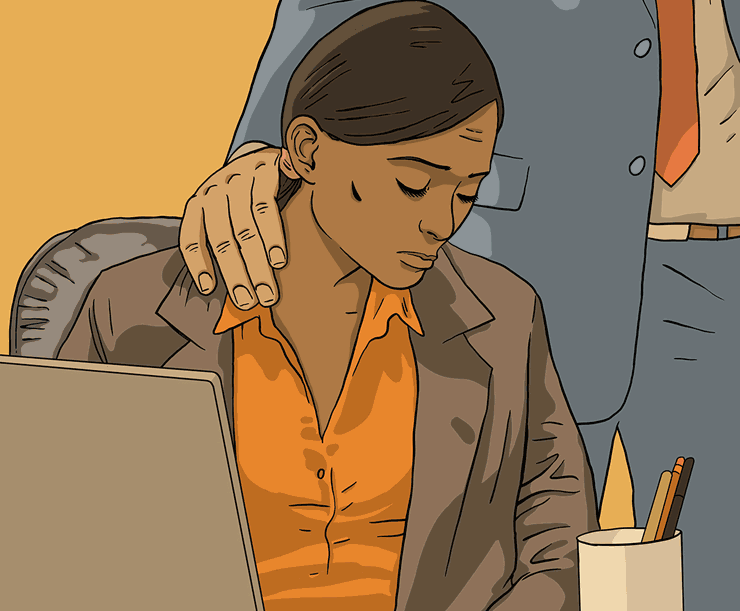 We must engage in a winning fight against harassment at the workplace by calling into question the overall behaviour of a company’s staff and its collective culture and, beyond that, of society in general.

By Pierre Bremond – The Weinstein scandal, and the movements that followed, #MeToo, #NiUnaMenos, #BalanceTonPorc, have not only brought the reality of sexual and gender-based violence to media attention, they have also largely contributed to awareness of the magnitude of the problem, particularly in the workplace.

These movements have liberated women’s voices and helped lift a corner of the veil still covering sexual harassment in the workplace, but the taboo still exists, even more so in countries where there are no laws against this type of aggression. Depending on the country, between 20% and 50% of women have been victims of violence or of sexual harassment at their workplace and most cases are never reported.

Why choose not to report it?

Faced with such an avalanche of gender-based violence, the first thing we wonder is why? ». Why are these behaviours not reported, particularly in countries that have specific laws to deal with them? There are various reasons. First, because harassment can begin in an insidious manner: it begins with comments or with jokes that have a sexual connotation creating an atmosphere of embarrassment, even if the person who is the victim may think that “it’s not that bad.” When these remarks become even more aggressive, the situation that has been created is already confused and filled with shame and is likely to dissuade the person from reporting them.

There is also the fear that reporting will lead to difficulties at work or, even possibly, dismissal. People may fear that their colleagues or supervisors will not believe them. They may legitimately fear the end of their career. Theoretically, victims are protected by law, but there is always the possibility that the complaint will be used against them. Some victims may also be traumatised and feel a sense of shame, preventing them from verbalising what they have been through. Finally, the status of “victim” in itself stops them from reporting: people refuse to see themselves as such and choose to remain silent rather than have to suffer the short term consequences of reporting the harassment.

Support the person without making her feel guilty

Take this fictitious case. Juliette, 30, works for a company of about 30 employees. For several weeks, she has been subject to comments and invitations from her supervisor – invitations which she has always declined. He continues, sending her e-mails and text messages asking her the colour of her underwear. He comments on her legs, her cleavage, her lipstick that “he would like to taste” and a few days ago he stroked her bottom in the corner of a corridor. He asks her to accompany him on an upcoming business trip and he mentions sharing a hotel room because “the company must make savings.” His behaviour is more and more insistent so that Juliette no longer dares to be alone with him. She has lost weight, doesn’t wear makeup, no longer wears dresses that she used to love wearing. She arrives later and later to the office, she can’t concentrate on her work and her performance suffers.

Juliette decides to confide in Luigi, a colleague with whom she gets along well and who is worried about her. She tells him everything she has been going through for weeks, but she insists: he mustn’t talk to anyone about it. The first thing to show Juliette is kindness; that may seem like common sense, but it is very important for the victim to feel comfortable, without her words being put in doubt. It is also essential to avoid minimising what she has experienced or to make her feel guilty by telling her, for example, that she should have reacted in this or that way. After kindness, it is helpful to qualify the facts by reminding her that it is indeed sexual harassment and, therefore, a crime. With regard to the hand on the bottom, it is even a case of sexual assault.

Remember, in most countries that have sexual harassment laws, it is prohibited to impose behaviour on others with sexual connotations, through verbal or non-verbal language or in writing, with the aim of having sexual relations, despite the repeated refusal of the person who is the victim. Any attempt to gain access to the body of a person in a sexually explicit manner without obtaining consent, or by using violence or surprise, is considered sexual assault. Some countries do not distinguish between sexual assault and rape; they just consider rape as the most serious form of sexual assault. Then there are other countries that stipulate that any act of sexual penetration, whatever its nature, committed on another person by force, coercion, threat or surprise constitutes rape.

Keep a written record of the testimony

Luigi, the confidant, should play the role of adviser, while respecting Juliette’s wish for confidentiality. For example, he can recommend that she talk to the company doctor as well as to friends and relatives who are likely to have witnessed her anguish or a deterioration in the state of her health. It should be explained that a file containing evidence and certificates could help later in consolidating any possible judicial proceedings, even if the person is not yet ready to report the harassment. Under no circumstances should the confidant go faster than “Juliette.” If she’s not ready, he must respect her choice and not act in a way that could be harmful (for example, he must not directly confront her abuser).

In some companies there are union representatives who can help her by advising her on her rights. This role can also be played by external trade union offices or associations that support women who are victims of violence. These associations count on the assistance of voluntary or paid lawyers who can help her in her approach, whether or not a complaint has been made.

It is also always helpful to keep a written record of the testimony. In the first place, Juliette should be told to keep all traces of the alleged harassment: SMS, emails, any photos or recordings. The confidant may also take notes or ask Juliette to write a report about all events of this nature, including the places, dates and a precise description of what took place. If an investigation is opened, all these written or recorded traces may serve as evidence. Even if it is Luigi, the confidant, who presents the evidence, the latter has witnessed his colleague’s suffering for weeks or even months. He knew her as cheerful and smiling, always well-dressed and confident, yet little by little he saw her change and fade; she lost weight or, instead, gained weight, she isolated herself, broke down in tears, didn’t wear makeup, dressed in a careless fashion, her character changed, she became depressed or angry, couldn’t bear any comments, etc. What she said in confidence to Luigi has cast a new light on her changes and although Luigi is only an indirect witness to the violence suffered by Juliette, his testimony may be taken into account if there is an investigation.

How to act while respecting the desire for anonymity

By confiding in Luigi, Juliette began a process. She has managed to break the mental straitjacket in which she was locked as a result of the harassment of which she is a victim. For her, it is already a first step. And even if she requested Luigi not to tell anyone, the latter, as a custodian of Juliette’s confidences, knows very well that these confidences are all calls for help. Therefore he must act. Yet how can he do this and still keep the confidentiality requested by Juliette?

Acting may take the form of questions to a supervisor or any other colleague: “Don’t you think that Juliette has changed? She looks sad and is no longer like she was before. “, or else “Don’t you think that X’s behaviour towards her is a little weird? “, “Why is he always asking her to join him in his office? ». This type of question may cause the chain of command to wonder about the relationship between Juliette and her supervisor.

In certain cases, this can help, however, in others it won’t, because it’s difficult to make some people see what they just don’t want to see.

For Luigi, it is more worthwhile to ask Juliette if she will allow him to speak about it to a manager (human resources for instance) while still keeping her anonymous. As the company has only thirty employees, it is more difficult to do this than in a big company. If she accepts, Luigi may present the problem to this manager and stress that he cannot reveal the name of the person involved. He can propose organising a meeting for all employees on information about and the prevention of harassment at the workplace so that the manager can make himself available to speak in private with anyone who requests it.

The advantage of this approach is that the employer, through his employee representative, is now aware of a situation that involves harassment concerning two of his employees. Depending on the legislation of the countries involved, this same employer may consequently be obliged to take all steps necessary to maintain the health and safety of his employees by putting an end to the situation. The problem is that if the company takes its responsibilities, in this specific case of a small company with 30 employees, very probably Juliette’s anonymity will slip and this will naturally lead Luigi to wonder morally how opportune his approach was. He is the only one who can answer for his conscience.

The thousands of testimonies from victims that have been posted on social media networks during little more than a year have made the general public aware of the suffering and isolation of these women. They have, more often than not, been victims of a system comprised of silence and matters left unsaid, even if in most cases “everyone knew.” Everyone knew, in fact, that somebody was behaving inappropriately and that “it was best never to be alone with him.” We have to overcome this “everyone knew” factor.

We must engage in a winning fight against harassment at the workplace by calling into question the overall behaviour of a company’s staff and its collective culture and, beyond that, of society in general.

It is a collective responsibility that we must uphold together.