In the face of the Covid-19 crisis, as well as other global threats, multilateralism is a remedy for the vulnerability of States 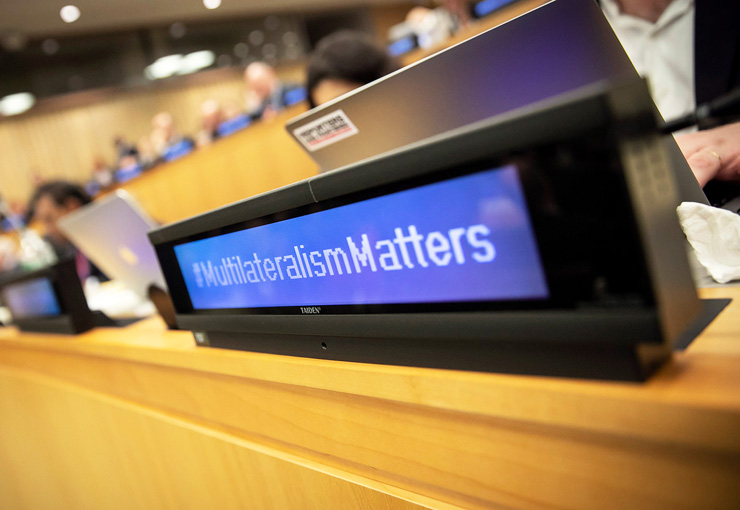 Multilateral organizations need to be supported in order to emerge stronger from this crisis while providing adequate responses to other global problems – photo: Alliance for Multilateralism

By María Victoria Espada – On April 24, we celebrate the Day of Multilateralism and Diplomacy for Peace. Launched last year for the first time, this United Nations official day is dedicated to promoting the three fundamental pillars of the United Nations: sustainable development, human rights, and peace and security. It also aims to communicate, defend and support multilateralism and international cooperation, values that are intrinsic to the UN Charter and the Agenda 2030 for Sustainable Development.

In international relations, the term multilateralism refers to the joint activity of several countries on issues of common interest. It is a form of decision-making where consensus and negotiation between different parties are considered essential. The main multilateral bodies were created after World War II to ensure world stability and peace and thus avoid the mistakes of the past, deriving in large part from unilateral actions. The UN is the best known multilateral body in the world.

In the current globalization era, issues such as climate change, geopolitical tensions, military conflicts, the challenges posed by new technologies, the protection of human rights, humanitarian and migratory crises, inequality and discrimination, terrorism, transnational organized crime, the world drug problem and the global health crises, among many others, are cross-cutting issues that require attention and collective responses.

As the COVID-19 pandemic has shown in recent months, independent national strategies result ineffective and only by acting collectively can countries hope to address the crisis.

Another example of inter-agency collaboration, closely followed by Dianova (and much appreciated), the adoption of the United Nations common position on drugs in 2018 enabled a number of different organizations to speak with one voice on these issues.

Addressing global problems effectively demands solutions and actions that the fruit of solidarity and international cooperation. Multilateralism is the only option, and certainly the best one, to counter global threats.

“Reinforcing multilateralism means reinforcing our commitment to achieving the goals of sustainable development and building a safer and more just world for future generations” – António Guterres, Secretary-General of the United Nations

However, for some years now, multilateralism has been going through a phase of crisis with multiple challenges. These include a rise in divergences of interests and positions within the international system, the regionalization of the system, bilateralism and nationalism, protectionism and xenophobia, populist rhetoric and extremism. In addition, unresolved conflicts further reduce the limited role of the UN and its agencies in countering these problems. Lastly, the reconfiguration of military forces, the newly-acquired economic weight of various countries, as well as the priority of the national over the international introduce changes in a fragile global balance, posing a threat to peace, security and sustainable development.

International cooperation is more essential than ever. Multilateral organizations need to be supported in order to emerge stronger from the various crises and to provide practical responses to global problems. But they also need to be reformed and modernized so as to be better-equipped to develop efficient partnerships with the private sector, academia, civil society and other social actors, with the aim of responding to the needs of citizens around the world, while “leaving no one behind”.  As the Conference of NGOs in Consultative Relationship with the United Nations (CoNGO) (of which Dianova International is Vice President) pointed out in its Declaration: the 75th anniversary of the UN (UN75) in 2020 is a crucial time to promote inclusive multilateralism and advance global governance reform and innovation.

Civil society has also made its voice heard through initiatives such as UN2020, aimed at highlighting the importance of multilateralism and the United Nations by proposing collective recommendations to strengthen the global governance system.

To protect human rights, peace and security, and to achieve sustainable development for all, the best and only option is more multilateralism, more dialogue, more partnerships and more solidarity.