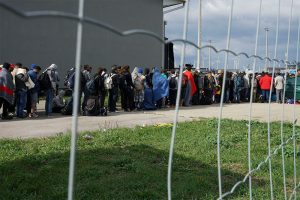 The NGO Committee on Migration is a member of the Conference of Non-Governmental Organizations (CoNGO) in consultative relationship with the United Nations Economic and Social Council. The mission of the NGO Committee on Migration is to encourage the protection and promotion of migrants’ human rights, in accordance with the United Nations Charter.

We now find that those fundamental human rights have been violated by the summary Executive Order of a Member State prohibiting migration from seven selected countries with Muslim majorities. Ostensibly an instrument to protect a country from potential terrorism, the injunction prohibits all migration from the designated states, even by those holding valid entry permits in multiple categories, including refugees fully vetted by a strenuous process frequently lasting several years. Many of these have been forbidden to board planes for their destinations; they have been forcibly removed from planes; they have been forced to sign papers in a language they did not understand, thereby renouncing their right to enter the country of their destination; they have been stranded at airports and forcibly detained for hours and even days.

The decree, which was arbitrarily and summarily enforced, is clearly in violation of several of the UN Conventions prohibiting discrimination on the basis of religion, nationality or race. On a personal level this decree will rip apart families whose only hope against the appalling injuries they have already suffered has been eventual reunification; it will deny children the opportunity for growth through peaceful education and development; it will deny students, scholars, artists and writers the opportunities for the fruitful imaginative and creative interactions with their peers which enrich our intellectual, social and cultural lives; it will deny the potential contributions of such migrants to the development of crucial technology; it will deny us all many of the entrepreneurial projects which build a country’s economy; it will deny the country the care-giving which is sorely needed equally for its children and its aging population.

It is an arbitrary, xenophobic, profoundly harmful act which in its disregard for promises, its violation of fundamental and dearly cherished human rights and humane values diminishes us all. It creates division, demonizes and stigmatizes as potential terrorists a particular group of people on the sole basis of their religion, ethnicity and national origin. It sows fear, suspicion and instability everywhere.

We call upon the United Nations and the 193 nations of which it is composed, born of the wreckage of war, xenophobia, hatred and violence, to condemn this unjust and injurious decree and to work peaceably with all the countries concerned to bring about a sane, measured and peaceful solution to benefit all nations and all peoples everywhere.