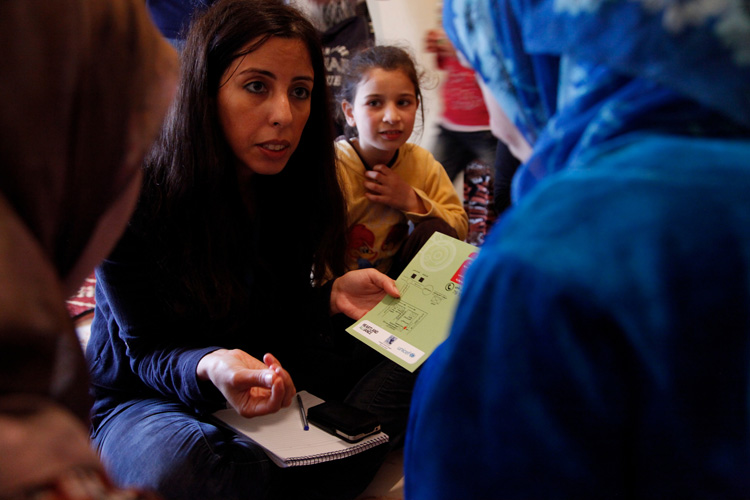 Providing access to support for Syrian girls and women at risk of gender-based violence and forced marriage – photo: UK Department for International Development – license: CC BY 2.0

By Gisela Hansen – Achieving gender equality in health means that all expressions of gender are in the same conditions to fully exercise their rights and their potential to be healthy, contribute to health development and access healthcare resources without barriers.

Appealing for equality implies that there are differences between men and women in terms of health needs, access and control of resources, and these differences must be addressed to correct current imbalances.

Women in general and some specific groups of them (migrants, old women, girls, ethnic minorities) are especially vulnerable to poverty, due to the dominance patterns that determine the personal and social relationships between women and men. Therefore, it is known that the health risks derived from poverty are greater for women than for men, since the consequences of poverty are combined with the effects derived from gender inequalities. This greater vulnerability of women refers to the concept “feminization of poverty“.

The areas of health and violence throughout life

Violence against women and girls affects their integrity, producing harmful effects in the physical, psychological and social areas. Although some forms of sexual violence are systematically used as weapons in war conflicts, violence against women within the family is the most frequent and highlights the domestic violence. The statistics obtained in different parts of the world show that between 16% and 52% of women experience physical violence by their partners and at least 20% were sexually assaulted during their lives. Because of the relations of domination, women suffer violence in all stages of life, from the prenatal stage (selective abortions, female infanticide), in childhood (sexual abuse, genital mutilation, child marriage) to old age (Poverty, greater barriers to access to health services, etc.) (WHO, 1998).

In terms of mental health and gender, this is a field with a very precarious development despite the progress made in the last 2 decades. To consolidate it, an interdisciplinary collaborative effort is necessary to consider the interaction of the different phenomena involved: biological, environmental and psychosocial. It is necessary to introduce training in health professionals and researchers, to incorporate knowledge of the variables related to gender in clinical decisions, therapeutic management and research. So, we can think over how to avoid some phenomena such as over diagnosis and over-medication in the female population, or the perception in some professionals that cases of mental health in women are more complex and have a worse prognosis than their male peers just for prejudices.

Knowing which is the health condition of the population means that we know why people may fall ill, do the identification of their needs and demands, those are goals that should be present in the design of policies, programs and services. However, studies and research highlighted that current health knowledge suffers from a lack of critical analysis to allow the visualization of health problems that affect women and men differently.  The introduction of a gender perspective in the health field implies a differentiated evaluation of the consequences for men and women of any planned action, including legislation, policies and programs, in all sector and at all levels.

Adapted from: World Health Organization – “Global and regional estimates of violence against women” (2013)