As we celebrate the International Day for the Eradication of Poverty on 17 October, how far are we really from achieving this objective? 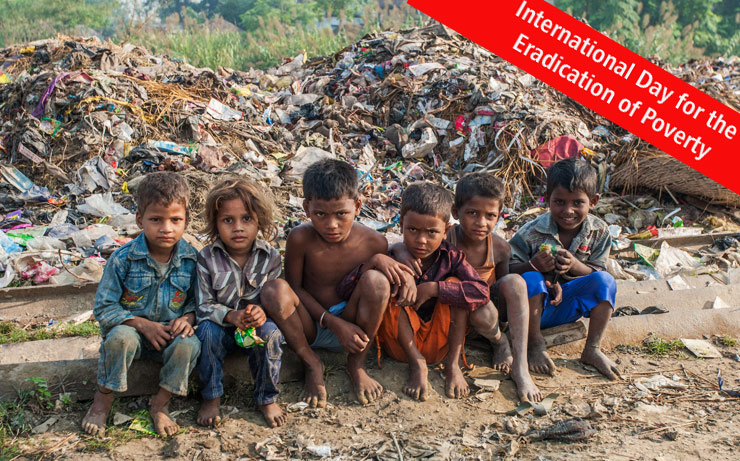 One in five children live in extreme poverty – Children in Raxaul, in the state of Bihar, one of the poorest in India, November 2013, Shutterstock

By Federica Bertacchini and María Victoria Espada – In 1992, the General Assembly of the United Nations (UN) declared 17 October the International Day for the Eradication of Poverty. Years later, in 2015, when the UN implemented the Sustainable Development Goals (SDG) and the 2030 Agenda, ‘putting an end to poverty in all of its forms throughout the world’, was identified as the primary objective.

Poverty is a complex concept that impacts many different areas of the lives of communities and individuals. The term poverty does not only refer to economic matters, it is a multifaceted phenomenon that results in people lacking the capacity of living a decent life. Poverty is a human rights issue per se and every society has an obligation to eradicate it.

The causes of poverty include unemployment, social exclusion, and the increased vulnerability of certain populations to disasters, diseases and other phenomena that impede development and productivity. Inequality caused by poverty damages economic growth, undermines social cohesion, increases political and social tensions and, in some instances, generates instability and conflicts. The wellbeing of all people is interlinked and having an economic position which allows people to lead a decent life is fundamental to achieve it.

The current situation and the dramatic impact of Covid-19

According to the Sustainable Development Goals Report (2020) global extreme poverty was reduced from 36% in 1990 to 10% in 2015. That year, the 783 million people who were living below the international poverty line, measured at 1.90 dollars per day, had greater difficulty in satisfying their most basic needs including health, education, and access to water and sanitation. Southern Asia and sub-Saharan Africa account for a significant portion of the world’s total extreme poverty.

However, since the Sustainable Development Goals were agreed, the reduction rate of global poverty decreased substantially.

In 2019, the global poverty rate was estimated at 8.2% and it was suggested that 6% of the world’s population would still be living in poverty by 2030, meaning that the 2030 goal to put an end to poverty would not be reached. If the pandemic continues as predicted and economic activity recovers during this year, the estimated poverty rate for 2020 will be 8.8% according to the report, with 71 million more people falling into extreme poverty. That would be the first increase in the level of global poverty since 1998.

In April 2020, the World Bank calculated that COVID-19 had caused between 40 and 60 million people to fall into extreme poverty. The recommended or essential closure of workplaces across the world affected 81% of employers and 66% of self-employed workers which severely limited jobs and income. Using more up-to-date calculations, a report by the Global Economic Prospects 2020 also predicts that 71 million people could fall into extreme poverty as a result of the pandemic, a figure which could reach 100 million if the global situation worsens further. This without a doubt poses a real additional challenge to being able to achieve the SDGs.

Women and children are suffering most

Despite some important progress to change the situation in recent years, in no country have women achieved economic equality with men, and women are still more likely than men to live in poverty. – photo: UN website

According to updated information published by the SDGs, for every 100 men globally between the ages of 25 and 34 living in extreme poverty, there are 122 women. Additionally, the economic effects of Covid-19, among others, are affecting women disproportionately. On the one hand, women are at the front line of the fight against the coronavirus, since they represent almost 70% of health and social workers around the world. On the other hand, about 60% of women work in the informal economy, without no guarantee of social security whatsoever. This puts them more at risk of falling into poverty.

As for children, the situation is even worse: one in every five children is living in extreme poverty.

Child poverty can be worsened by a number of factors including gender, ethnicity, race, and country of origin, among others. This can have irreversible effects related to malnutrition, preventable disabilities and other deprivations that diminish growth and potential development. Furthermore, child poverty is a key link in the intergenerational reproduction of poverty and inequality, and has a negative impact on the social development of countries. To that end, the battle to eradicate child poverty is critical to combat poverty in general and the inequality of societies.

An analysis carried out between Save the Children and UNICEF estimated that the coronavirus pandemic has pushed a further 150 million children into multidimensional poverty, depriving them of access to essential services such as education, health, housing, nutrition, sanitation or water. Additionally, the increase in poverty will make it very difficult for the most vulnerable children and their families to compensate for the loss of education caused by the closure of schools. Without education, children are more likely to be pushed into child labour or child marriage and remain trapped in a cycle of poverty for years to come.

The efforts of the Dianova network

Some members of the Dianova network have dedicated themselves, amongst other objectives, to the fight against poverty over multiple dimensions. The Society for the  Promotion of Youth and Masses, (SPYM) is the largest provider of shelters for homeless people in Delhi, India, with 72 centres that help around 6,000 women, men and children every day. Additionally, SPYM offers political and financial services to the homeless. By promoting the formation of self-help groups and acting as guarantor with banks, SPYM makes it easier for homeless people, who normally do not have identity documents, to open their own bank account. 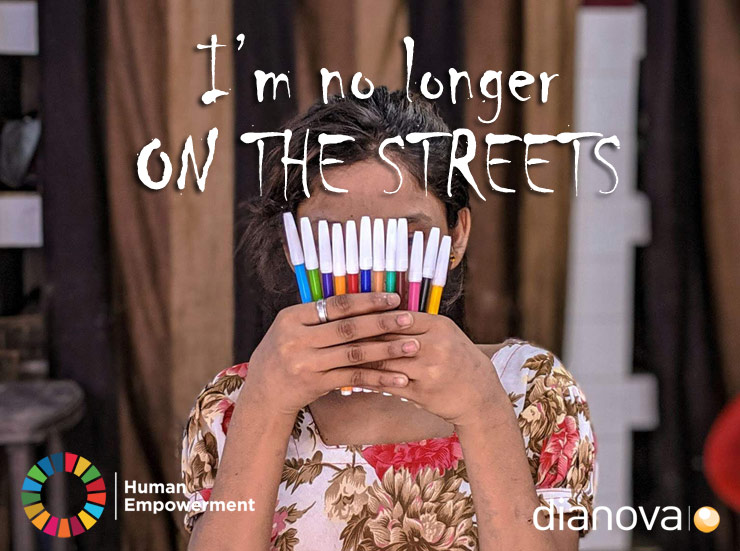 Human Empowerment Campaign: SPYM’s involvement in 2019 through its centre in Pardabagh dedicated to changing the lives of girls through education

SPYM operators are well aware that poverty and the need to survive are often the cause of illegal behaviours and actions. For this reason, since 2010, they have been working with young people in Delhi who are in trouble with the law and have additional problems. In collaboration with a government body in the capital, SPYM has been able to help 477 children with therapy sessions, literacy lessons and the teaching of everyday life skills.

In order to protect the most vulnerable groups, SPYM offers integrated treatment services to women and children who live in poverty, and are often homeless, and suffering from addiction, mental health and gender violence issues.

Between 2019 and 2020, 48 women have received care in the Pardabagh centre, in addition to courses in literacy, numeracy, computer and other life skills, in order to facilitate their reintegration into the labour market.

Kothowain , another of our members, works in isolated and difficult to access areas in Bangladesh with larger poverty rates amongst its population. Thanks to funding from SONNE-International and the activities carried out by Kothowain, that also involve local women’s groups, 712 disadvantaged indigenous students have access to primary education (11 schools) secondary school (one school) and technical training in tailoring (one centre), in Alikodom Upazilla. The provision of free accommodations and full scholarships have allowed for 49 students, originating from very poor families, to complete their studies.

Kothowain also has a programme aimed at the economic development of vulnerable women, financed by Helen Keller International. This programme involves 80 women living in the Thanchi Hills region and is focused on the fabrication of candles and brooms. The program is also complemented with workshops to develop business skills such as the development of business plans and the creation of relationships with the local market.