8 March, International Women’s Day – education, an instrument of high impact to create a sustainable path for self, family and community development

By Saionara König-Reis – Last year Dianova Nicaragua Foundation supported girls and boys living in a small rural community in Nicaragua, namely in Laguna 1 and 2, near the historic city of Granada. The project contributed with creating the conditions for children and youth to develop and strengthen soft competences that can allow them to build their identity and be protagonists in the promotion, restitution, exercise and advocacy of their rights to achieve their integral development.

Above all, the initiative questioned stigmas and preconceptions about gender roles as a central tool to strengthen rural youth’s personal and social skills and to improve their self-esteem. Engaging girls and boys, their parents, teachers, and other members of the community, the project in Laguna 1 and 2 invested in education for gender equality as the key to create avenues for actions of higher impact and a sustainable path for self, family and community development. 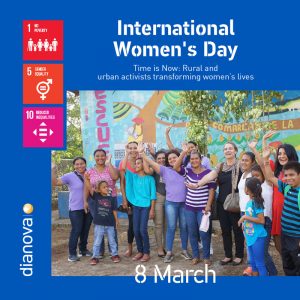 Girls in Laguna 1 and 2 are exposed to a series of barriers to their full development as a person and as a woman. To mention a few, poverty often leads to early school dropout, child labor and/or early, forced and underqualified immersion in the labor force. In addition, located in the vicinities of a major touristic city, trafficking and sexual exploitation of women and girls are a constant threat. And finally, in their homes strict gender norms lead to their (often unconscious and overburdening) dedication to care and unpaid work.

Another issue makes it is particularly important to address gender equality from early ages in Nicaragua, a country that in 2013 was reported by UNFPA to be the n.1 country in Latin America in the number of adolescent pregnancy: 28% of the girls in the country give birth before reaching the age of 18. Local studies show that the situation is even more critical in rural areas, where 3 in each 10 girls undergo a teenage pregnancy, aggravated by the fact that  only 50% of those receive some kind of emotional or financial support from the fathers.

Regrettably, this situation is supported by strong gender norms and religious beliefs that are rooted in the local culture, influencing people’s sexual behaviors and impacting in the use (or lack thereof) of contraceptives measures. The status quo of gender norms also has a direct repercussion in public health, relationship dynamics, sexual exploitation, and in intrafamily and gender-based violence.

Educating for gender equality: a call from the Sustainable Development Goals

We know that teen pregnancy affects the lives of girls in a disproportionate manner when compared to boys – for the first group, to mention a few, it often becomes a barrier to access education and sometimes lead to abandonment by their families. Nonetheless, the situation can only be prevented if there is a change in the mind-set and cultural behaviors of both groups (and their families and surrounding communities).

In this sense, education on gender equality and sexuality is key to address the different needs and the different roles and responsibilities of boys and girls vis-à-vis matters of self- esteem, empowerment, family planning, and sexual behavior, as well as of the roles of mothers and fathers as their models, educators and protectors.

As illustrated in the Sustainable Development Goals (SDGs), in particular on SDG 4.7 (focus of Dianova’s work in Nicaragua), educating for gender equality is, in fact, an opportunity to involve male and female youth to build their social skills, strengthen their families and communities and foster their capacities to make conscious decisions that impact their health, bodies and lives.

This will be the topic of an event organized by Dianova during the upcoming session of the United Nations Commission on the Status of Women (CSW62) on March 13 in New York, promoting peace, empowerment, dignity, respect and the improvement of the overall living conditions for rural women and girls. The event will tell the story of rural girls in Nicaragua and will also feature the participation of UNESCO, the Peace Boat, the Church and Society, and the Pan-Pacific and South-East Asia Women’s Association.

Laguna 1 project: a mother and her child in the “Life skills” workshops implemented by the Dianova Nicaragua Foundation – photo: Dianova