Philanthropy is a necessity, but it could also give the world its best opportunity to build a better future 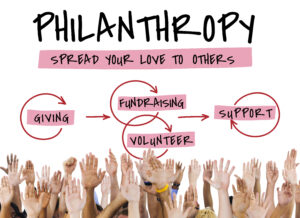 Catalytic philanthropists might be the type of givers the future of NGOs – and, most of all, the future of humankind – actually needs. Photo Shutterstock license cc

By Federica Bertacchini – More than half of 2020 is already behind and the indomitable Covid-19 is still ravaging the world’s most vulnerable. The cost of responding to the health emergency and its socio-economic impact is rising by the day, while those at closest contact with communities in need face increasing insecurity. Charity networks and research institutes in many countries are organizing surveys among NGOs to somehow quantify the magnitude of the shock and the survival prospects of NGOs.

Since the cuts and shut down of operations in, respectively, 48 and 18 countries announced by Oxfam last May, the public opinion started to realize the heavy toll the pandemic is taking even among the most prominent actors of the third sector. With 1450 staff and 700 partner organizations affected, repercussions extend way beyond a single administration. Even with the United Nations announcing a USD 6.7 billion appeal to update the original (still half-funded) USD 2 billion plan for humanitarian aid launched in March, estimates predict that COVID-19’s socio-economic repercussions could tally up to USD 90 billion.

Considering that these figures exclude the costs of work being done in the development and social sector, calculating how hard civil society and non-profit organizations are being hit and will suffer over the coming year is a great enigma.

A recent survey on over 500 charity organizations from the UK Institute of Fundraising, in partnership with the Charity Finance Group and National Council for Voluntary Organisations, reveals that 84% of charities think their organization has a role to play in responding to the coronavirus outbreak, but is lacking government funding. 52% of them have reduced their levels of service, with a further 12% intending to do so in the future. Furthermore, 91% of the surveyed charities are already experiencing or expecting a disruption in cashflow, with a projected loss of 48% in voluntary income and a likely decrease of about a third (31%) in the overall revenue. The situation appears very similar in other countries, such as Ireland or Italy, and even in the birthplace of philanthropy, Switzerland.

In fact, a survey conducted on 124 NGOs by the International Geneva Welcome Center (CAGI) in collaboration with the local UN Office (ONUG), shows that 98% of the interviewed organizations were impacted by the pandemic and 79% had to reduce their activity. Even though 54% estimate this impact as moderate, as suggested in a webinar hosted by the Geneva Press Club, the Secretary General of Terre des Hommes Suisse, Mr. Christophe Roduit, and the General Director of Médecins Sans Frontières (MSF) Suisse, Ms. Liesbeth Aelbrecht, express their concerns for the years to come.

Although public funding for international solidarity seems to remain stable in the country, the necessity of cancelling the biggest fundraising events targeting the general public, coupled with the increase in expenses due to shifts in activities and hindered logistics, will certainly affect future budgets.

Is it really all that grim or are there solutions and hopes civil society can hold on to?

According to Mr. Simon O’Connell, the Executive Director of Mercy Corps Europe, who is certainly not oblivious of the challenges discussed above, innovation, creativity and cross-sector collaboration might be key. Among the most interesting alternatives mentioned in his article for the World Economic Forum, he suggests setting up a COVID-19 response investment vehicle or/and developing a tailored Risk Framework Mechanism. As he highlights, there is a dire need for a new financing model enabling a greater risk-sharing approach, where the burden of financial risk is shouldered by both NGOs and their donors.

Looking at the private sector, where a 1-3% theft and destruction losses is planned for and processes and procedures are crafted with the purpose of staying within a pre-determined acceptable threshold, donors and NGOs could re-think the actual tolerance limits and better adapt to the conditions in which many NGOs work, such as conducting life-saving operations in the most insecure and high-risk environments in the world.

Preparing the world to future challenges

Great hope can also come from enlightened philanthropists, such as Mr. James Chen, Chair of the Hong Kong-based Chen Yet-Sen Family Foundation. In fact, he is convinced that “ a new form of catalytic philanthropy could help the world prepare for future pandemics and tackle urgent existing health crises”. The approach he describes, quoting the real-life example of Bill Gates’ charitable strategy, involves investing loss-absorbing capital and building domain expertise on defined issues, in order to bring about long-term and lasting change.

Philanthropists are uniquely positioned to use their financial freedom to fund “iteration of hypothesis” to what might seem remote or impossible to treat societal problems. They can patiently challenge reality, because they are not  subject to “pressure for immediate results”, which might be the case for other types of public and private investors, either unwilling or unable to act.

Life with and beyond Covid-19 has governments and multilateral actors completely absorbed by challenges such as providing loans and non-refundable funding to keep people alive and stimulate the economy, while most business are preoccupied about their own survival. The opportunity for philanthropy is now tremendous and tremendously necessary. Catalytic social investments by philanthropists, today, have an unprecedented chance to play a crucial role in building on under-appreciated models. Many challenging issues have the potential to become critical and calamitous at any given time.

Catalytic philanthropists might be the type of givers the future of NGOs – and, most of all, the future of humankind – actually needs.