A brief summary of the six booklets of the United Nations World Drug Report 2020: key findings and policy implications 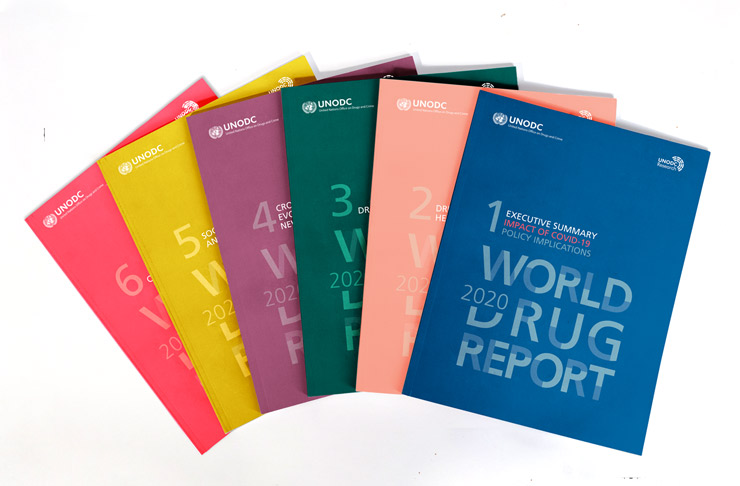 Presented in six separate booklets, the World Drug Report 2020 provides a wealth of information and analysis to support the international community in implementing operational recommendations on a number of commitments made by Member States

The measures implemented to prevent the spread of Covid-19 have affected all aspects of the illegal drug markets, from production and trafficking to use.

For example, drug shortages have been reported and could have negative health consequences for people with drug use disorders

Drug supply shortages can go together with an overall decrease in consumption (for example, of drugs that are mostly consumed in recreational settings such as bars and clubs) but may also, especially in the case of heroin, lead to the consumption of harmful domestically produced substances, as well as more harmful patterns of drug use by people with drug use disorders.

The impact of the pandemic on drug markets is unknown and hard to predict in the long run, but it could be far-reaching. Drug markets could be disrupted by the economic downturn and associated lockdowns. Rising unemployment and lack of opportunities will make it more likely that poor and disadvantaged people engage in harmful patterns of drug use, suffer drug use disorders and turn to illicit activities linked to drugs – either production or transport. And drug trafficking organizations are likely to exploit the situation by providing services to the vulnerable and boosting their ranks with new recruits. With Governments less able to respond, these shifts could quickly take root and become the new reality for many communities. 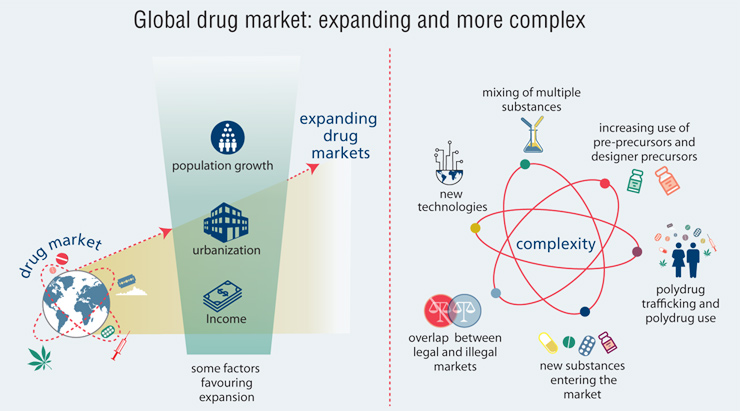 Increasing wealth is linked to rising drug use, but the poorest suffer the largest burden of disorders

Worldwide, drug use is more widespread in developed countries than in developing countries. Drugs such as cocaine are even more firmly associated with the wealthier parts of the world. Likewise, within countries, the wealthier sectors of society have a higher prevalence of drug use. But the transition to drug use disorders is more prevalent among people with a lower socioeconomic status. Data from a handful of countries suggest an association between harmful patterns of drug use and disorders and low income. Those patterns seem to be less common among wealthier sections of society.

Drug markets are becoming increasingly complex. Plant-based substances such as cannabis, cocaine and heroin have been joined by hundreds of synthetic drugs, many not under international control. There has also been a rapid rise in the non-medical use of pharmaceutical drugs.

Emergence of substances not under international control stabilizes, but new potentially harmful opioid are on the increase

Roughly 500 new psychoactive substances are found on the national markets of Member States each year. Currently, most of those are stimulants, followed by synthetic cannabinoid receptor agonists and a smaller number of opioids. However, while the overall number of NPS has stabilized, the proportions have changed. Opioid NPS accounted for just 2 per cent of the number of NPS identified in 2014 but by 2018 that figure had risen to 9 per cent.

Opioid NPS, many of them fentanyl analogues, have proved both potent and harmful, fuelling overdose deaths in North America and to a lesser extent in other regions.

Individual NPS hardly ever establish their own significant market. However, evidence from Europe suggests synthetic cannabinoids are a significant problem among marginalized sections of society such as the homeless and prison inmates.

Canada, Uruguay and 11 jurisdictions in the United States allow the manufacture and sale of cannabis products for non-medical use.

In most of those jurisdictions, cannabis use has risen since its legalization, although the same trend was observed in other jurisdictions where non-medical use of cannabis was not legalized.

Legalization behind the global slump in cannabis herb seizures?

Global seizures of cannabis herb fell to their lowest level in two decades in 2018 – a slump driven by declines in North America, where seizures have fallen by 84 per cent in the last 10 years. By contrast, seizures almost doubled in the rest of the world over the same period. The pattern of seizures suggests policies aimed at liberalizing cannabis markets have played a key role in the decline.

Medicines for pain relief are unequally distributed across regions. More than 90 per cent of all pharmaceutical opioids available for medical consumption were in high-income countries in 2018.

Pharmaceutical opioids for pain management and palliative care are available mostly in high-income countries, whereas low and middle income countries consume less than 10% of these opioids

Poorer people face a greater risk of drug use disorders

Only 1 in 8 people with drug use disorders receives drug treatment each year, and only 1 in 5 people in treatment is a woman! 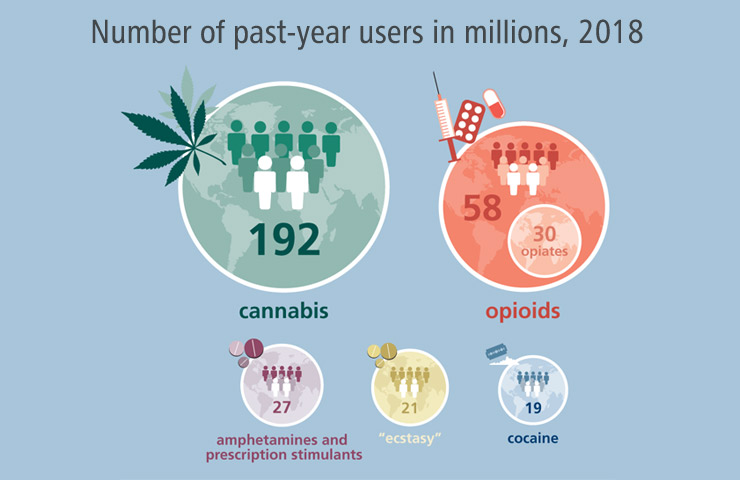 Cannabis the most used substance, opioids the most harmful

But that lower number of users belies the harm associated with opioids. This group of substances accounted for 66 per cent of the estimated 167,000 deaths related to drug use disorders in 2017 and 50 per cent of the 42 million lost due to disability or early death, attributed to drug use.

In West, Central and North Africa, the opioid crisis is fuelled by tramadol; in North America, by fentanyls. Although those sub-regions have little in common in terms of economics, demographics or general patterns of drug use, both are struggling with an opioid crisis fuelled by substances that are easy to access and cheap to produce.

In North America, the use of synthetic opioids such as fentanyl has fuelled two decades of increases in opioid overdose deaths. In 2018, fentanyls were implicated in two thirds of the 67,367 overdose deaths registered in the United States. Canada, too, has reported similar findings, though with lower numbers. The overdose deaths attributed to fentanyls are partly driven by the unpredictability of their potency as found in illicit drug markets.

In West, Central and North Africa, the market for non-medical use of tramadol has grown considerably. An increasing number of people with tramadol use disorders are entering treatment in the region.

Stimulant use on the increase

Opioid shortages caused by COVID-19 restrictions could lead to users substituting with more readily available substances such as alcohol or benzodiazepines, or to mixing with synthetic drugs. More harmful patterns of use may emerge as some users switch to injecting, or to more frequent injecting.

The financial downturn and social distancing rules could also have a double impact on people who inject drugs. In addition to being more vulnerable to COVID-19 infection and complications from the disease because they have compromised immune systems, they are also likely to face problems in accessing treatment and other services from under pressure health providers.