An article by Maria de los Angeles Lobos Palacios highlights the close relationship between violence against women, mood disorders and problematic substance use among Chilean women 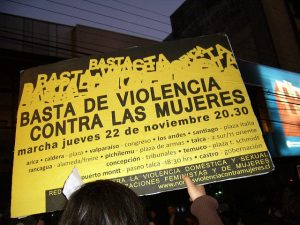 According to a 2004 study by Chilean National Women’s Service (SERNAM) (1), fifty per cent of married women had suffered spousal abuse including physical and psychological violence. Among the causal factors to domestic violence are economic factors (especially a widespread poverty) in addition to cultural and societal factors which contribute to maintaining women in a state of submission. For example, Until 1989, the Civil Code of Chile legally sanctioned husbands’ “ownership and authority over their wives” (!) Hard to find a better way to… encourage violence.

Chile’s widespread culture of patriarchy is a drag on the country’s development: a 2011 study found that only 43 per cent of women in Chile are engaged in paid employment (vs. 75% in the United States); More importantly, the domestic violence that results from this culture has profound implications for the whole of Chilean society. Estimates of lost productivity resulting from domestic violence reach 2 percent of GDP, not including costs associated with long-term emotional impacts.

For all victims, domestic violence increases significantly the risk of developing mental health disorders, including symptoms such as depression or problematic substance use, as evidenced in an article by Maria de los Angeles Lobos Palacios, psychologist and Director of Dianova’s outpatient treatment centre in Viña del Mar (Chile).

“Typically, women who use drugs are exposed to more violence than men. The social stigma – symbolic violence – that befalls them, through challenging traditional roles associated with gender stereotypes (good mother-wife), is greater. In the legal field, for example, in the case of sexual violence, abusers who use drugs are let off, the drugs being a mitigating factor for their actions, whilst for women they are an aggravating circumstance. This demonstrates the classic association that links alcohol or other drugs to virility in men but which associates them with promiscuity in women (increasing the risk of sexual assault). Women also face institutional violence by family courts and child services, which are highly abusive to women who are mothers and that consume drugs; a fact which worsens their condition and reduces the potential for recovery.”

Substance Use Disorders & Violence Against Women