Dianova joins the UNiTE campaign, 16 days of activism to end violence against women and girls 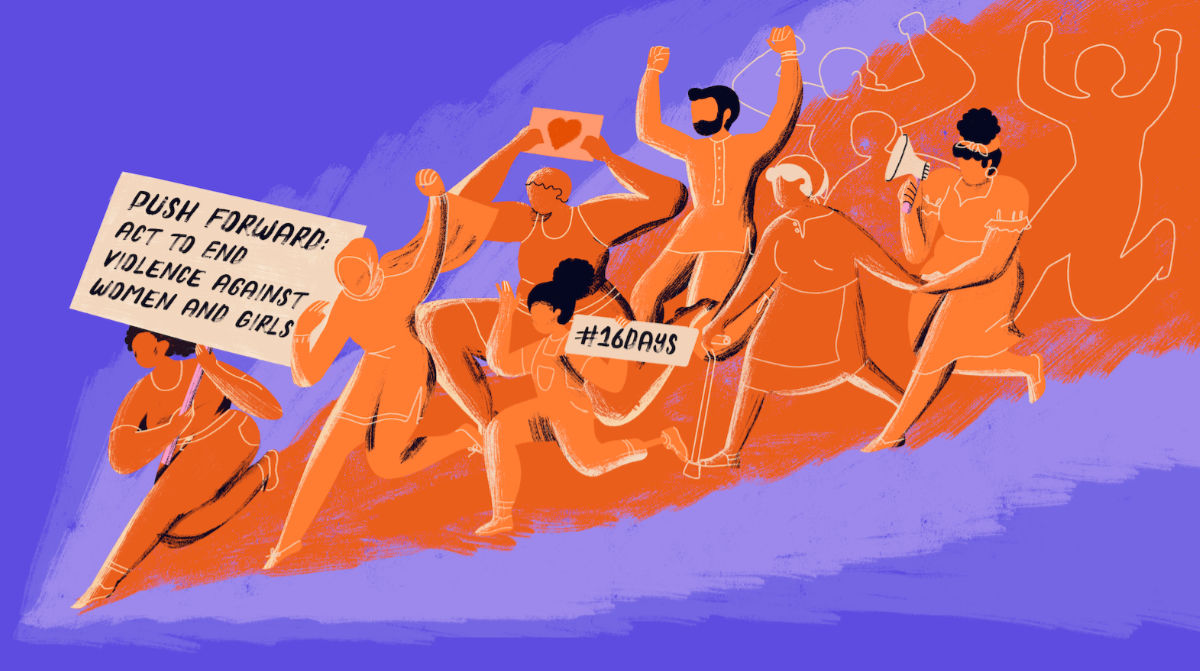 Since the pandemic began: 45% of women reported that they or a woman they know has experienced a form of VAWG; 7 in 10 women said they think that verbal or physical abuse by a partner has become more common – Image: UN Women

As it does every year, Dianova is joining UNiTE, a campaign implemented by the United Nations Secretary-General to end violence against women and girls.  The UNiTE campaign, implemented in most countries, begins on November 25, International Day for the Elimination of Violence against Women, and concludes on December 10, Human Rights Day.

The UNiTE campaign calls for global action to increase awareness, galvanise advocacy efforts and share knowledge and innovations to end violence against women and girls (VAWG) once and for all. Launched in 2008, UNiTE is a multi-year advocacy effort aimed at preventing and eliminating VAWG around the world. UNiTE calls on governments, development actors, civil society, women’s organizations, young people, the private sector, the media and the entire UN system to join forces in addressing the global pandemic of violence against women and girls.

As in previous years, the colour orange will be used to represent a brighter future, free from violence against women and girls, as a unifying theme running through all global actions of the UNiTE campaign.

Theme for 2022: Activism to end violence against women and girls

Five years ago, the #MeToo movement, founded by activist Tarana Burke in 2006, exploded and sparked global mobilization creating a moment of urgency in preventing and responding to VAWG. Since then, unprecedented awareness and momentum have been created thanks to the relentless work of grassroots activists, women’s human rights defenders and survivor advocates worldwide to prevent and eliminate VAWG. Other movements around the world such as #NiUnaMenos, #BalanceTonPorc, #TimesUp amongst others have also catalyzed change. Thanks to women’s rights activism and advocacy ending VAWG is higher on the political agenda than ever before with progress in strengthening laws and policies, essential services and prevention strategies.

While the COVID-19 pandemic has intensified all forms of VAWG, it has also created even more urgency which UN Women, women’s rights organizations and others have capitalized to spur and secure policy changes which are expected to have long-term, trajectory altering impacts on reducing violence.1 The UN Secretary-General has galvanized the UN system, Member States and other actors to put an end to VAWG once and for all through the COVID-19 Political Engagement Strategy and his call to Member States to develop emergency response plans to eradicate violence against women and girls.

“Orange the world” as a way to represent a brighter future, free from violence against women and girls!

Violence against women and girls: the most widespread human rights violation worldwide

Yet, notwithstanding these growing efforts and achievements, VAWG remains the most widespread and pervasive human rights violation worldwide affecting more than an estimated 1 in 3 women[1], a figure that has remained largely unchanged over the last decade[2]. The most recent global estimates showed that, on average, a woman or girl is killed by someone in her own family every 11 minutes[3]. The COVID-19 pandemic has intensified VAWG and has also exposed and exacerbated deep structural inequalities, reversing decades of progress on women’s labour force participation, raised the number of women living in extreme poverty and increased the burden of unpaid care and domestic work, all of which exacerbates the risk factors and drivers of VAWG.

At the same time, there has been a rise in anti-rights movements including anti-feminist groups resulting in shrinking space for civil society

At the same time, there has been a rise in anti-rights movements including anti-feminist groups resulting in shrinking space for civil society, a backlash against women’s rights organizations and a rise in attacks against women human rights defenders and activists.

Data from Front Line Defenders demonstrates that the killings of women human rights defenders is on the rise[4] and women defenders are routinely targeted with harassment, hate speech, discrimination, dissemination of personal or intimate information, defamation and other forms of online violence to silence and punish their public participation in social media.

Despite these worrying trends, there is also more evidence than ever before that VAWG is preventable. Evidence demonstrates that the presence of a strong and autonomous feminist movement is the single most critical factor to drive policy change in ending violence against women and girls both in transnational contexts and in domestic policy making[5], signaling the importance of investing in women’s movement building. Research has also shown that largescale reductions in VAWG are possible through multi-sectoral coordinated actions of governments and civil society, and intensive advocacy efforts and media campaigns carried out by feminist organizations[6].

However, we need to do more. The Generation Equality Forum Action Coalition on GBV Blueprint is working to progressively improve and increase international funding by 50% to women’s rights organizations, activists and movements including those working to address gender-based violence against women and girls in all their diversity by 2026.

Dianova joins efforts to support and invest in strong, autonomous women’s rights organizations and feminist movements; it is key to ending violence against women and girls once and for all!

[1] Across their lifetime, 1 in 3 women, around 736 million, are subjected to physical or sexual violence by an intimate partner, non-partner or both (Violence against Women Prevalence Estimates), however, this figure would be even higher if it included the full continuum of violence that affects women and girls including sexual harassment, violence in digital contexts, harmful practices and sexual exploitation.

[2] WHO (2021) Violence against Women Prevalence Estimates

[3] UNODC (2021) Killings of women and girls by their intimate partner or other family members. Global estimates 2020