For the eighth year in a row, Dianova actively participated in the 63rd Commission on the Status of Women in New York 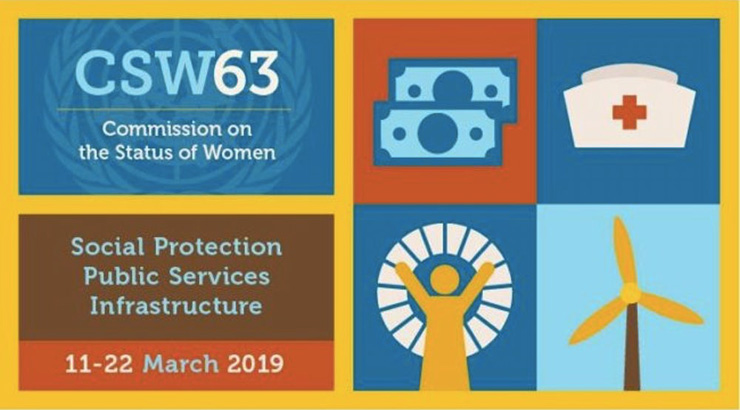 For the eighth consecutive year, Dianova actively participated in CSW63 activities through a special event entitled “No woman left behind: hope for women facing substance use disorders”

By Victoria Espada. The sixty-third session of the Commission on the Status of Women was held from March 11th to March 22d at the United Nations headquarters in New York City, with “Social protection systems, access to public services and sustainable infrastructure for gender equality and empowerment for women and girls” as its primary subject.

For two weeks, at official meetings, expert panels and almost 700 parallel events, delegates from member state governments and more than 9,000 representatives from civil society organizations exchanged experiences, debated strategies and agreed on commitments for social protection systems, public services and sustainable infrastructure to contribute to the empowerment of women and girls.

For the eighth consecutive year, Dianova actively participated in CSW63 activities under the guidance of Ms. M. Victoria Espada, its representative to the United Nations. Furthermore, on Friday March 15th, Dianova organized its principal event entitled “No woman left behind: hope for women facing substance use disorders”, co-sponsored by members of the Pan-Pacific and Southeast Asia Women’s Association (PPSEAWA) and the Conference of NGOs in Consultative Relationship with the United Nations (CoNGO). The event brought together different experts to exchange experiences, identify initiatives and find solutions that include women with substance use disorders as beneficiaries of the 2030 Agenda for Sustainable Development.

The event was moderated by Ms. M. Victoria and welcoming words were delivered by Liberato Bautista, Deputy Secretary-General of the General Board of Church and Society and Chairman of CoNGO. Liberato reminded the assembly that CoNGO’s mission is to facilitate the participation of non-governmental organizations (NGOs) at the United Nations (UN) by ensuring proper access to meetings, conferences, special events and documents, as well as guaranteeing free exchange of ideas between both parties. He also emphasized the essential role played by NGOs in the discussions leading to the founding of the United Nations and how, nowadays, CoNGO members and committees work to exchange information, cooperate on substantive matters and bring NGOs’ experience to government discussions in UN forums. In this context, he pointed out the importance of Dianova’s work in the substantive committees in which it participates as well as its role in the vice-presidency of CoNGO.

Lisa Goldfarb, Assistant Clinical Professor of Psychiatry at NYU Langone Health Medical Center, began her discourse by identifying gender differences in substance use that have subsequent implications in designing treatments for women.

Women with substance use disorders are more likely to suffer post-traumatic disorders and chronic pain, they are at greater risk than men of contracting infectious diseases and other blood borne infections, and they experience increased gender violence.

Additionally, in the present-day, women also start substance use at an earlier age closer to that of men, and they increase their consumption faster than men. Women, however, face many barriers to accessing treatment for substance use disorders and there are punitive attitudes toward mothers and pregnant women. For these reasons, Lisa emphasized on the need to rely on combined treatments for psychiatric conditions and substance use disorders that take into consideration women’s specific needs. 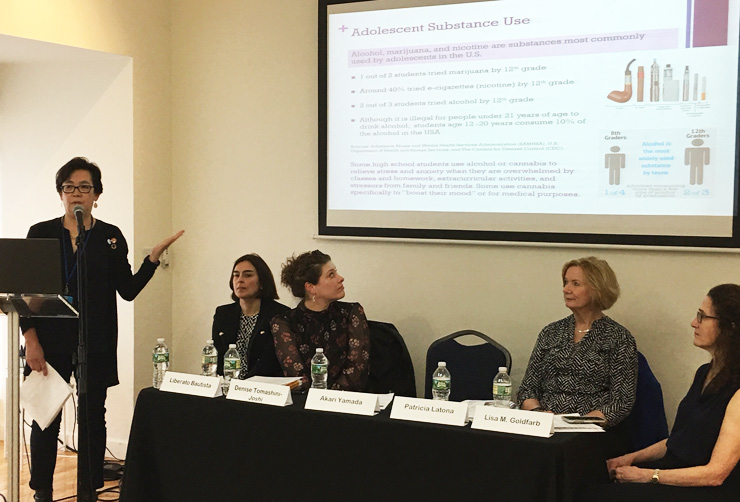 Patricia Latona, representing Zonta International, explained the complex relationship between substance addiction and illegal human trafficking. Increasingly, traffickers seek individuals with addiction issues whom they can easily coerce and control; they also take advantage of vulnerable persons who have attended programs and addiction rehabilitation centers. Currently, there are about 21 million victims of illegal trafficking, 71% of whom are women and girls, and 54% are victims of sexual exploitation. For Patricia, the response to this type of problem should be approached from a human rights perspective and it should include all factors that increase individual vulnerability, such as poverty, inequality, lack of education and unemployment. Action to reduce discrimination and violence against women through better legislation and better education is also required. Likewise, treatment centers for substance use should be increased and improved with medical, psychological and legal services for women.

Denise Tomasini-Joshi, Director of Open Society Foundations’ Public Health Program, explained that drug use should be separated into categories (occasional use, dependency and addiction) since they pose different questions and thus should have different treatment policies and programs. She also pointed out that the great majority of substance use treatments not only are unavailable to women, but those that exist are based on protocols tested on men, thus making their effectiveness in women extremely low. Denise thanked the Secretary General of the United Nations, António Guterres, for calling attention to the need to decriminalize drug use, as that would enable a greater number of women to access treatment and other support services, decrease the high rates of gender violence associated with drug use and generally reduce the negative impact of substance use where it already exists.

Akari Yamada, PPSEAWA representative, spoke about the relation between adolescent girls and substance use in the United States. She pointed out that 5.2% of girls between the ages of 12 and 17 were treated for substance use disorders in 2014 in the U.S., and that using coexists with mental health disorders and other at-risk behaviors, such as unprotected sex and reckless driving. There are, however, factors that can protect adolescents, such as feeling connected to their parents, family, school and teachers, as well as developing skills to fight peer pressure, learning risk-taking in guided learning contexts and participating in prevention and awareness programs. Akari stressed that it is of the utmost importance that mental health services and programs also bear in mind the patients’ language and cultural differences and address existing inequalities regarding access to and service quality.

Ms. M. Victoria, Dianova’s representative to the United Nations, adjourned the event after a Q & A period where the audience could speak out and exchange views with the panelists, thereupon closing an extraordinarily informative and fruitful session.