“The future we want, the United Nations we need”: The UN is called to reinvent itself in order to confront present and future challenges 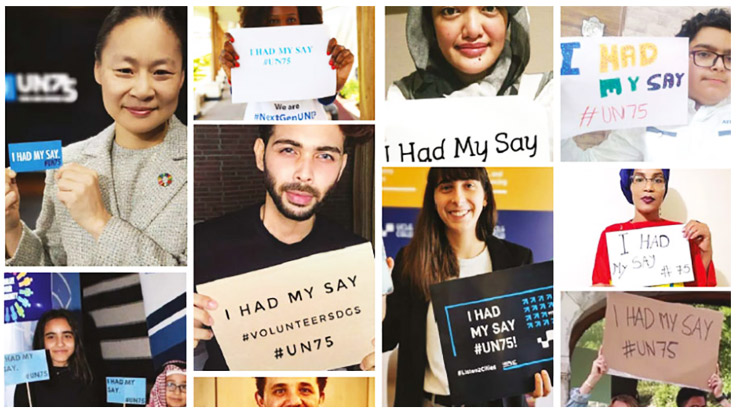 More than one million people across the world participated in the global conversation launched by UN – photo: screenshot UN website

By María Victoria Espada— The United Nations Organisation (UNO) reaches its 75th anniversary. The Charter of the United Nations was signed on 26th June 1945 in San Francisco, United States, and came into force on 24th October of the same year. The official commemoration of the anniversary took place in September of this year during the celebration of the 75th General Assembly in New York and under precautionary measures put in place for the pandemic: physical distancing between the authorities and experts in attendance at the event and virtual participation by the heads of State and Government.

The future we want

Focusing on the theme “The future we want, the United Nations we need: reaffirmation of our collective commitment to multilateralism“, the celebration also saw the adoption of the “Declaration on the commemoration of the 75th anniversary of the United Nations” by heads of State and Government. In the declaration, the member states acknowledge the numerous achievements of the UN and highlight the ills that we currently face: poverty, hunger, inequality, armed conflict, terrorism, insecurity, social unrest, forced migration, climate change and pandemics, among other things.

It is clear that the world the founders of the UN imagined 75 years ago has not yet been achieved. However, the member states also agree that these challenges can only be dealt with through a revitalised, more resistant and sustainable multilateralism, with the UN at the center of the efforts. Additionally, the implementation of the 2030 Agenda for Sustainable Development is recognised unanimously as a catalyst for ensuring the survival of people and the planet.

Even citizens of the world had the opportunity to participate in the commemoration. Through the initiative UN75, which was launched at the start of 2020 by the UN Secretary General, António Guterres,”a global conversation” on the current challenges has been established to give people the opportunity to express their concerns and also ideas on how to construct a better and more sustainable world. Part of this dialogue has included a one minute survey which more than one million people from all over the world had already participated in by 21st September this year.

Amidst the current crisis, the immediate priority of most respondents is improved access to basic services: healthcare, safe water and sanitation, and education – photo: UN report ‘The Future we Want’, 2020

According to the results of the survey published in a report, in the middle of the current crisis, the priority is improving access to the basic services of medical attention, drinking water, sanitation and education. A greater solidarity and support for the areas most affected by the pandemic are also priorities, including the fight against poverty, inequality and unemployment.

Looking forward, the majority of participants across all regions worry about the impact of climate change. Likewise, they consider it necessary to ensure a greater respect for human rights, resolve conflicts, tackle poverty and fight against corruption.

Interestingly, the younger participants and those from developing countries tend to be more optimistic towards the future than older people or those living in developed countries.

A significant majority of participants in the survey believe that international cooperation is vital to face the current challenges and see the UN as being “essential” in order to tackle them. However, participants in the survey call for the UN to change, to become more inclusive and diverse with actors including civil society, women, young people, vulnerable groups, cities and local authorities, businesses and other organisations. They also call for developments towards a stronger leadership and greater consistency in exercising their moral authority to uphold the Charter. Other suggested changes include greater responsibility, clarity and efficiency in the implementation of its programs and operations.

Within civil society, numerous organisations have made public statements in commemoration of the UN’s 75th anniversary, such as the Conference of Non-Governmental Organisations in Consultative Relationship with the UN (CoNGO), of which Dianova International is At-Large Vice-President. In their statement, CoNGO urged all governments to strengthen their commitment to the UN, not only morally but also financially and materially.

CoNGO also calls for the organisation to adapt to the needs and realities of a changing world, improve its credibility and efficiency, ensure an inclusive decision-making process at all levels and involve civil society to a greater extent in its decisions and actions.

Pioneered by a group of representatives from civil society, the UN2020 project emphasises in the People’s Declaration and Plan for Global Action the important role of civil society in order to tackle global and future challenges and calls for improvements to their methods of engagement in the development process. The declaration, signed by Dianova International among numerous other organisations, recommends, in particular, the creation of a United Nations Parliamentary Assembly, which could serve as an advisory body to the UN General Assembly and whose delegates could be elected directly by the people they represent.

Despite the complicated and adverse political situation, it is clear the UN’s reform needs to be addressed and what better time to start it than the 75th anniversary. Civil society organisations hope the member states and government will support the future work of the organisation and adhere to the words in their political statement: “We are not here to celebrate, we are here to act“.