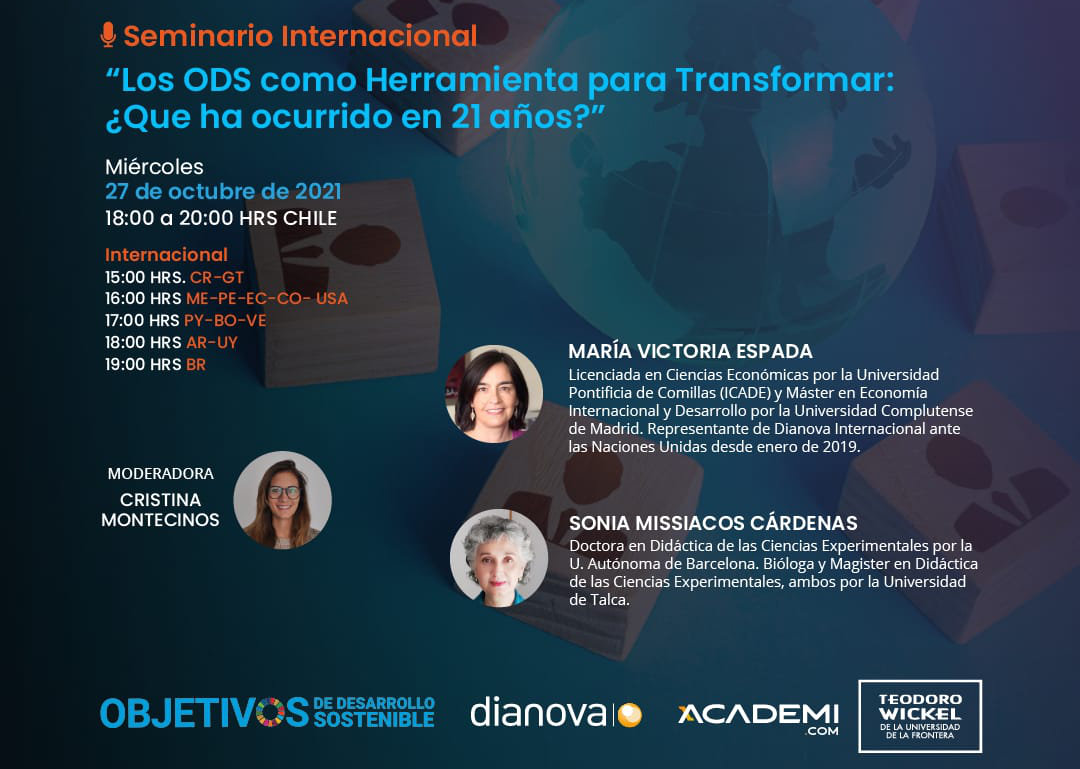 Sustainable development does not solely centre on people, but it also takes into account the limited nature of the planet’s resources – view of event’s flyer

Training Directorate, Dianova Chile Foundation – An important international meeting about the 2030 Agenda and the Sustainable Development Goals (SDG) was organized online on 27th October. Two prominent speakers participated in this event: Dr Sonia Missiacos Cárdenas, an academic at the Catholic University of Maule and adjunct professor at Dianova Chile, and María Victoria Espada, Representative of Dianova International before the United Nations. In addition, the seminar was presented and moderated by Cristina Montecinos, founder of Mara Media, a podcast production company focused on the SDGs.

The meeting was organized within the framework of the cooperation agreement established between Dianova Chile and the Teodoro Wickel Institute of la Universidad de la Frontera in August 2020, with the participation of Dianova International. With a reflexive and critical look at the sphere of education and the environment, a retrospective evaluation of the SDGs over the last 21 years was carried out, starting with the Millennium Development Goals (MDG) which preceded the SDGs.

What is sustainable development?

“It is essential to harmonise three basic elements, namely, economic growth, social integration and protection of the environment. These three elements are interconnected and all are essential for the wellbeing of people and societies”.

The impact of the Dianova network on the Sustainable Development Goals

The SDGs were also addressed from an educational perspective, especially stressing the importance of environmental education, at the core of the SDGs.

“The SDGs should be understood and implemented with a sense of transforming the way in which we live our lives”.

Thus, and continuing with the presentations, María Victoria stated that “…SDGs are based on three principles : human rights, in the spirit of the Universal Declaration of Human Rights adopted by the United Nations in 1948; not leaving anyone behind , i.e. achieving equal and balanced development within countries and between countries; and gender equality and women’s empowerment, a crosscutting principle of the seventeen SDGs”.

Next, Dr. Sonia Missiacos explained in detail the evolution and implementation of the SDGs in Latin America, and in particular, Chile, focussing on SDG 4: Quality Education.

“Of all the waste in Chile, only 1% is recycled – Chile has seven of the ten vulnerabilities identified on the planet”.

Dr. Missiacos stated that “there is a social class related system in Chile, with private funding, subsidised and municipal education, which causes disparities and, as a result, minimum skills are not regularly achieved (…) On the other hand, it’s been ten years since sustainable and environmental education was implemented in primary and secondary classes, but nobody is in charge of establishing learning objectives through an explicit academic programme”.

According to Dr. Missiacos, this results in a lack of awareness in the population regarding these issues. She mentioned for example that “of all the waste produced in Chile, only 1% is recycled. Our country presents seven of the ten vulnerabilities identified for the planet”.

Challenges for the future

Regarding the challenges ahead, María Victoria pointed out that “as a result of the pandemic and the global economic crisis, the preliminary statistical data show that the poverty index has risen one point, from 7.5% to 8.5%, which means that 80 million people, approximately, have been driven into extreme poverty...” In addition to the above, there has been little progress on the targets associated with SDG 13: Climate Action, a situation that is further aggravated considering the lack of statistical data to assess progress on SDGs in different regions around the world.

Although the objective of achieving the SDGs by 2030 seems unattainable, the session closed a positive note urging the redoubling of efforts in the urgent task of rigorously informing and educating people in order to create individual and collective awareness of the SDG targets.