Unesco’s ‘the next normal’ campaign questions our ideas about what is normal, suggesting that we have accepted the unacceptable for far too long 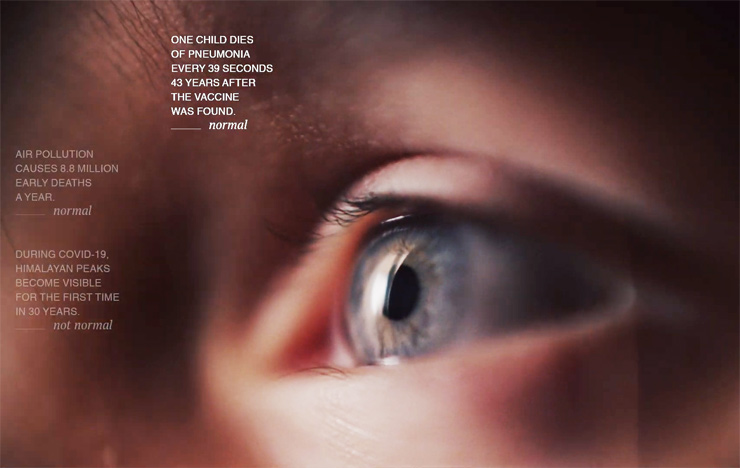 “Disasters and emergencies do not just throw light on the world as it is. They also rip open the fabric of normality. Through the hole that opens up, we glimpse possibilities of other worlds.” Peter C Baker, The Guardian

What is “normal”? The fact that air pollution kills more than eight million people annually?  That top influencers can make up to a million dollars for only one social media post? That one child in five is still out of school?

Pneumonia is a preventable disease which vaccine has been around for 43 years. Still, it continues to kill more children than any other infectious disease. Is that normal?

Every 24 hours, between 150 and 200 species of plant, insect, bird and mammal become extinct. How can we get used to it?

A crisis far from normal

These are not normal times. Because of the severity of the pandemic, many of us have lived, and continue to live, with fear. Everyone can be affected, but even more so the most vulnerable people. For example, the elderly, the chronically ill, the homeless, and the people who use drugs.

Many have passed away. Others are living with the long-term effects of Covid-19. Not to mention the jobs crisis that’s looming.

In a thought-provoking 2-minute clip, ‘The Next Normal’ campaign reminds us that just because we have gradually become accustomed to a certain form of normality does not mean that we have to reproduce it in the “world after”.

As the clip shows, we’ve also witnessed beautiful things during this crisis. Last March, Monica Falocchi, head nurse of the intensive care unit at Brescia Civil Hospital, made the cover of The New York Times Magazine. Her face expresses the pain and fatigue of all the caregivers. But it is also a deserved tribute to those whose job is to save lives.

For the first time in nearly two decades, March 2020 was the first March without a school shooting in the US.

Monica Falocchi, head nurse at Brescia Civil Hospital makes the cover of the New York Times Magazine – Screenshot from ‘The Next Normal’ campaign – View other photos by Andrea Frazzetta

Another perspective on the world

The international health crisis has forced huge challenges upon us. We’ve invented new collaboration skills and new ways of relating to other people. Our perspective on the world has changed. For example, researchers from all over the world have pooled their knowledge. As a result, they managed to decode the genome of the virus in just three days! This had never happened before.

Air pollution has decreased all over the planet. Because of better air quality, the Indians were able to see the peaks of the Himalayas 200 kilometres away for the first time in thirty years. Even China’s largest cities, among the most polluted in the world, saw their skies lighten.

Another sign of nature regaining (just a little) its rights, a pair of 20-metres fin whales were spotted and filmed in the Calanques National Park, off the coast of Marseille.

During the pandemic, eleven warring countries declared ceasefires. In Africa, mobile phone companies provided free access to online educational resources so that everyone could learn.

This was not “normal” in the world before.

Inventing the ‘next normal’

What if each of us made an effort so that all these beautiful things should become normal? The Unesco campaign raises this issue as a critical question to be addressed by all of us.

How can we act against social inequalities and injustices? Individually and collectively, what can we do against the mass extinction of species that is occurring?

Scientists speak of a 6th extinction caused by agriculture and deforestation. Do we want to live in this world? To raise our children in this world? (Tip: the most effective action at our disposal: reduce our consumption of meat).

We have accepted the unacceptable for far too long. Our previous reality can no longer be accepted as normal. Now is the time for change.

And changing is not just about politics. Everyone has a role to play. The UNESCO campaign invites us to learn the lessons of recent months, by inventing “a world after” that is more respectful of nature, more just, and more peaceful.