For the first time, the UNODC World Drug Report examines the impact of drugs on the environment, without really looking at the impact of policies themselves

The connection between environmental problems and the illicit drug economy is increasingly being addressed – image: World Drug Report 2022

The Editor – Until October, Dianova will be publishing a series of articles dedicated to some of the main themes and lessons learned from the World Drug Report 2022. Today’s article focusses on the special booklet that addresses the direct and indirect impact of illicit drug crops and transformation on the environment.

For the first time, this booklet provides a comprehensive view of the links between drugs and the environment within the bigger picture of the Sustainable Development Goals, climate change and environmental sustainability. It highlights both direct and indirect linkages and provides several examples of the significant impact of drugs on the local environment. It also reviews the latest scientific evidence for plant-based and synthetic drugs. On behalf of Dianova, we find it very positive that UNODC is willing to broaden the perspective and collect data in areas not usually associated with drug policy.

The environmental impact of illicit crop cultivation and drug manufacturing is relatively small compared to that of legal agriculture or pharmaceutical sector. Nevertheless, their consequences can be significant at the local, community and individual levels. One of the key differentiating aspect of the environmental impact of illicit drugs is the location of cultivation and production. Illicit crop cultivation tend to be located in remote and sparsely populated areas, far from any governmental presence.

Despite the small amount of land required for illicit drug cultivation, it has a huge impact in terms of deforestation and degradation of some of the richest ecosystems, especially in national parks and indigenous territories

Those areas can be home to highly diverse and fragile ecosystems, such as those found in forest reserves and natural parks. Similarly, synthetic drug manufacture usually takes place in remote locations and results in dumping toxic drug-related waste in forests and rivers, or directly into sewage systems. The impact of said discharges in wastewater can be much higher in countries or communities with poor or non-existent wastewater treatment systems. 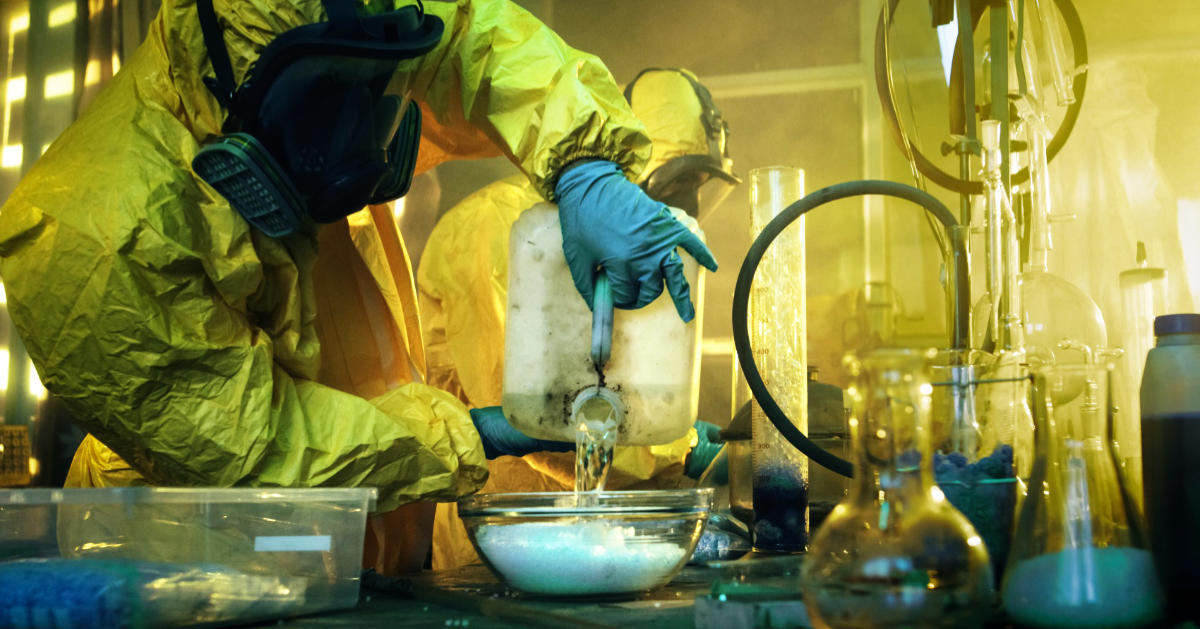 The clandestine synthesis of illegal drugs such as methamphetamine is a growing environmental concern, as hazardous materals are regularly dumped into sewage systems, or in forests and rivers – image Adobestock photos

The cultivation of these drugs is likely to negatively affect soil and water due to the heavy use of fertilizers and pesticides. In addition, the final production stages, including chemical processing and waste, can also affect the air. Finally, certain irrigation methods can accelerate soil salinization, i.e. the excessive accumulation of salts in the ground. It should also be noted that the carbon footprint of indoor cannabis cultivation is considerably larger than that of outdoor cultivation (16 to 100 times larger).

Globally, total emissions from cocaine manufacture are estimated at 8.9 million tons of carbon equivalent per year, which represents the average annual emissions of more than 1.9 million gasoline-powered cars.

The environmental impact of synthetic drugs is determined in part by the methods of production and the corresponding waste patterns. The discharge of waste can have significant effects on the soil, water and air, as well as indirect effects on animals and the food chain.

The waste produced by the process of synthesizing drugs such as amphetamines, methamphetamine and ecstasy is between 5 and 30 times the volume of the end product. This creates important challenges for law enforcement when dismantling seized production labs. For local authorities and citizens, it can bring about significant costs both in terms of the financial burden of clean-up operations and the health costs resulting from pollution. Lastly, wastewater treatment may reduce the environmental impact of dumped waste, however such resources are unevenly distributed around the world, and unfortunately, the majority of the global manufacture of these drugs is carried out in remote areas with no water treatment resources…

Finally, illicit crops and trafficking can indirectly trigger deforestation when their proceeds are laundered through the development of human settlements, legal agricultural activities, cattle ranching and other activities that require vast tracts of land.

The carbon footprint of indoor cannabis cultivation is primarily determined by energy use, including for HVAC (heating, ventilation and air conditioning) equipment needed to maintain temperature, humidity and lights ideal for plant growing conditions. Taken together, these climate control measures account for more than 80% of the carbon footprint of indoor cannabis cultivation[2]. Lastly, drug trafficking in general can be indirectly linked to energy use when illicit online trade is conducted with cryptocurrencies[3].

The UNODC report highlights the need to mainstream the “do no harm to the environment” objective when developing and implementing drug policies at global, national and local levels. It also recommends minimizing the environmental impact of such policies while ensuring that they contribute, directly and indirectly, to the protection of the environment and biodiversity.

In addition, the report intends to implement new international standards to support Member States and the international community to systematically integrate environmental protection into the design and monitoring of alternative development programmes.

Given the magnitude and urgency of the climate crisis, we are pleased to see UNODC devote an entire section to the relationship between drugs and the environment. Moreover, the international organization’s commitment to ‘do no harm to the environment’ and setting standards for environmental protection is obviously welcome.

All over the world, drug farmers and traffickers are wreaking ecological havoc –clearing fields from primary rainforest to sow new crops, piggybacking drug smuggling with illegal trafficking in timber or endangered animal species, laundering their money in land deals that devastate protected forests…

Yet, an issue not sufficiently addressed in the global report, in our view, is the potential negative impact, whether direct or indirect, of drug policies themselves. According to a report by the Open Society Foundations[4], nearly fifty years of adherence to crop eradication and drug interdiction policies have been instrumental in driving  drug farmers and traffickers into increasingly fragile ecosystems, where the environmental impact is most devastating.

The report points out various research gaps on the links between illicit drugs and the environment, noting that it is often limited and focused on isolated studies showing local or specific impact without extrapolating its potential meaning at the global level.

In order to address this complex reality, we believe it is important to broaden these research perspectives to include all factors that may contribute to the environmental impact of drugs, whether direct or indirect. We therefore urge UNODC to continue its efforts to provide reliable and robust data to inform policy decisions. Only if we realize the true scale of the problem can we tackle it and make progress towards achieving the 2030 development goals. Time is running out.

[3] Cryptocurrency networks require huge amounts of energy because of “mining”, the process of generating new structures necessary for the operation of these currencies. This process requires enormous computing power and therefore electricity.

[4] The Impact of Drug Policy on the Environment, 2015, available in English and Spanish