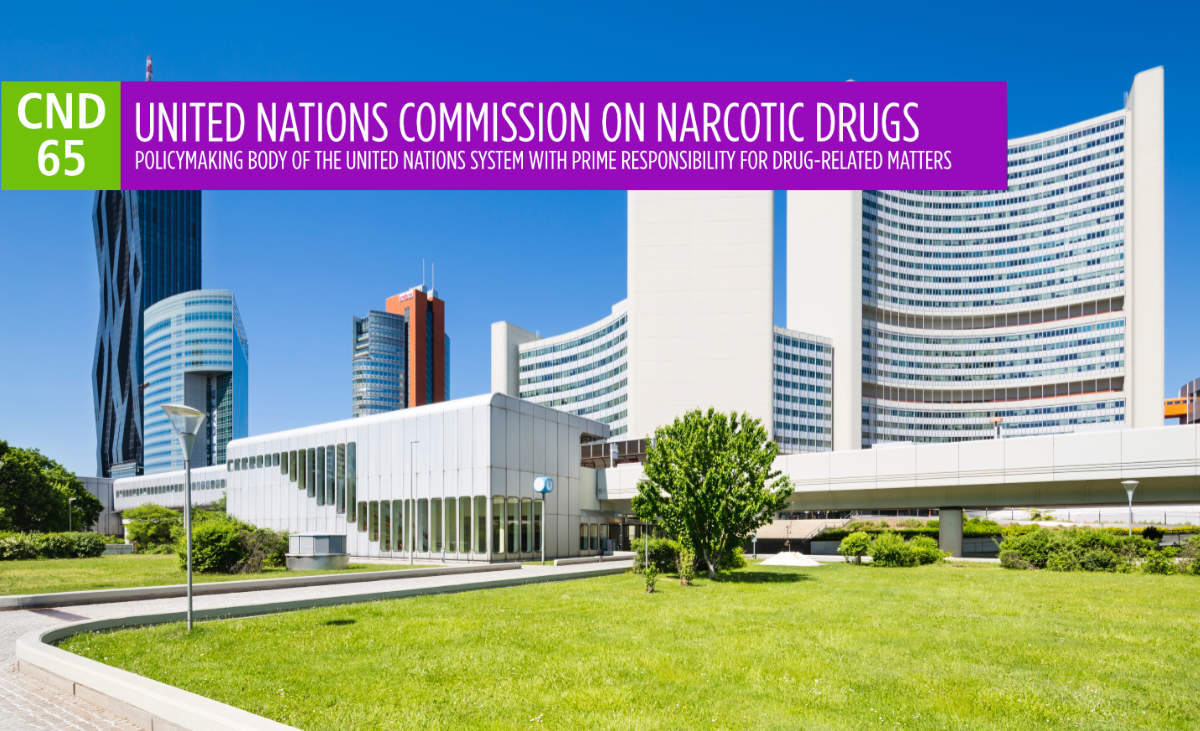 This session was undoubtedly atypical and in the uncertain world we live in diplomacy and multilateral environments are needed more than ever so we can move forward together. The drug problem is a reality that requires our undivided attention – Image: Shutterstock

By Lucía Goberna – Russia’s military aggression against Ukraine has had a major impact on the conduct of the Commission on Narcotic Drugs (CND). Tensions have been reflected in diplomatic discussions, the withdrawal of a resolution proposed by Russia and the vote on the election of the Eastern European Group member to the FINGOV Committee. View IDPC note on this issue

As UNODC’s closing remarks at the end of the session put it: “This session has been challenging. In some ways, it has been unprecedented. The circumstances in which we met have been deeply divisive and this commission has been affected (…) Ultimately, the meetings have produced important outcomes that will lead member states to improve drug control responses and protect public health. (…) The global drug problem does not stop when urgent threats arise, and neither do we. Resolutions are important despite the challenges in the negotiations”.

The 65th session of the United Nations CND took place in the midst of the greatest geopolitical crisis in Europe in recent times – the invasion of Ukraine disrupted the work of the Commission and highlighted Russia’s growing isolation at the UN – image: Support for Ukraine, Shutterstock

Despite the appalling situation, the role of the institutions is to keep working and moving forward. This is why representatives from 130 countries, 17 international organisations and 86 NGOs gathered in Vienna from 14-18 March 2022 for the 65th session of the CND, which was held in a hybrid format, with 1,400 registered participants. In addition to the formal sessions and the negotiation of resolutions, 130 online side events were organized, covering a wide range of topics.

For the 11th consecutive year, Dianova participated in the session (virtually, for once), organizing and participating in side events, civil society meetings and submitting a written statement.

Statements from member countries and international agencies addressed the current situation, including on how to facilitate the availability of essential medication in Ukraine or how to support people in need of harm reduction, addiction treatment or HIV prevention services in the country (read UNAIDS statements in this regard).

You may also access the transcripts of the sessions provided by the CND Blog managed by the International Drug Policy Consortium (IDPC), to whom we are grateful for their hard work in documenting the sessions.

Among the agenda items were a review of the global drug situation and the state of implementation of international agreements, and the review and decision on scheduled substances. The resolutions presented and discussed dealt with various topics such as early prevention, drug trafficking, the illicit manufacture of drugs and the proliferation of designer precursors, alternative development and the relationship between drug policies and the environment.

More information can be found on the official CND65 website and the documentation page.

Dianova published a written statement for the session on the need to focus on the children of people who use drugs, which has been included as official documentation for the session.

Dianova participated in four side events:

Children and families affected by parental drug use: current gaps and promising practices

On behalf of Dianova International, Lucia Goberna made some introductory remarks before giving the floor to Dr. Gisela Hansen who proceeded to present Dianova’s work and publications in advocating the need to implement a children’s rights-based perspective in addiction services.

The event was organized by Dianova International with the co-sponsorship of the governments of Croatia and Italy, the Council of Europe – Pompidou Group, Asociación Proyecto Hombre and the San Patrignano Foundation.

The event focused on how to support NGOs in implementing local prevention programmes in collaboration with local Rotary clubs and in partnership with the Rotarian Action Group for Addiction Prevention (RAG AP).

Three field-based prevention projects were presented: one on prevention in Malgedem, Belgium, one on creating safe spaces for minors in the slums of Kampala, Uganda by the organisation UYDEL, and a universal prevention programme to train family members “Together We Grow. Families as health agents” designed and implemented by Dianova. Dianova was represented by Lucía Goberna and Dr. Antonio Molina.

In addition, the Rotarian Action Group for Addiction Prevention presented a tool measuring the social impact of prevention programmes, as well as the systems used to evaluate and monitor these projects. Lastly, the United Nations Office on Drugs and Crime (UNODC) presented the progress made in early prevention programmes and the need to develop evidence-based programmes.

The event was organized by the RAG AP, and co-sponsored by the UNODC’s Prevention, Treatment and Rehabilitation Branch, Dianova International, and the World Federation Against Drugs.

The event highlighted the importance of evidence-based therapeutic communities as an integral component of health systems and emphasised the need to provide services along the continuum of care.

This event featured a high-level opening panel with the Delegate of the Spanish National Plan on Drugs, Dr. Villalbí and the head of UNODC’s prevention and treatment branch, Giovanna Campello, among others.

The event focussed on three examples of concrete evidence-based interventions in the fields of prevention, treatment and harm reduction implemented by civil society organisations from Europe, America and Asia in collaboration with international organisations and member states. Dianova presented a good practice of partnership with the implementation of the COPOLAD Quality Management System within the Drug Treatment Network of Uruguay.

The event was organized by the Asociación Proyecto Hombre, with the co-sponsorship of the Governments of Spain and Uruguay, the UNODC Prevention, Treatment and Rehabilitation Branch, Dianova, the Foundation for the Global Research Institute, the Ibero-American Network of NGOs working on Drugs and Addictions (RIOD) and the Vienna NGO Committee on Drugs (VNGOC).

Dianova also participated in the organization of the event “Driving change from a shrinking space: Challenges for effective civil society participation in drug policy making” as a member of the EU Civil Society Forum on Drugs, and attended multiple side events throughout the week.

On the margins of the CND, other interesting encounters were organized, such as informal dialogues with the Executive Director of UNODC, the President of the International Narcotics Control Board, and the President of the CND. Dianova had the opportunity to ask Executive Director Ghada Waly about UNODC’s reporting indicators to the UN High Level Political Forum on the issue of treatment (pharmacological, psychosocial, rehabilitation and aftercare services) of substance use disorders, given the lack of information in this regard.

As usual each year, the Annual Assembly of the Vienna NGO Committee on Drugs (VNGOC) was held, with discussions on strategic and other internal issues, and the organization of elections for the Board of Directors. Dianova wishes to convey its congratulations to the newly elected members of the board, including Matej Kosir from UTRIP (for his second term), Beatrix Vas from YouthRISE and Asia Almas Ashraf from the World Federation Against Drugs. It should be noted that elections at the VNGOC are staggered, with half of the board members (three in total) being renewed on an annual basis to ensure continuity.

This session was undoubtedly atypical and in the uncertain world we live in diplomacy and multilateral environments are needed more than ever to be able to move forward together. The drug problem is a reality that requires our undivided attention.