By Lucía Goberna – The 2017 annual Dianova meetings drew 60 Dianova Network representatives from 14 countries to participate in training workshops and exchanges. “Keys to Strengthening the Dianova Network and to promoting social change” is the title of one of the workshops the group held during a full day. This session gave participants an opportunity to reflect and examine how to ehnance the impact of the Dianova network’s advocacy.

Participants included 18 people from Canada, Chile, Spain, the United States, Italy, Kenya, Nicaragua, Norway, Romania, Sweden, Turkey and Uruguay, who split into three working groups. The workshop was held in Spanish and English, with presentations and materials in both languages. 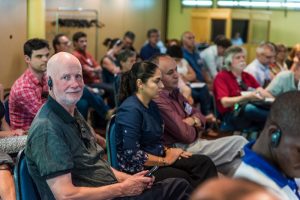 One of the ways to enhance advocacy was to create the International Ambassadors group, made up of representatives from Dianova organisations around the world. The mission of the Ambassadors encompasses multiple goals:  to increase the number of projects; expand the network’s critical mass; and achieve greater visibility, presence and influence in the organisational culture in order to promote advocacy.

One of the workshop exercises was to draw a map representing institutional relationships, identifying the agencies and authorities in each country and the issues Dianova is addressing in those countries. This exercise clarified for us where we are working and where we would like to be working. We were thus able to adopt a broader view and imagine the issues we’d like to address in the future and the agencies who could be our partners.

The second part of the workshop focused on the more theoretical details of political advocacy: what it is, how to advocate, what skills advocacy requires, how to design an advocacy plan, and identifying potential barriers within organisations like Dianova that can hinder advocacy.

The last part of the workshop featured a practical example of Dianova International’s advocacy work in the context of the UNGASS (the special session of the UN General Assembly on the world drug problem, which took place in April 2016).

Finally, participants worked in groups to identify advocacy goals in three specific areas that are critical to Dianova: drug and addiction policies; gender and inequality issues; and poverty, social exclusion and community development.

To end the workshop, members from all three groups met in a plenary session to summarize their experiences and present their conclusions to other participants.

It was a day of intense work, and included many exchanges and tremendous efforts by participants. Participants offered positive evaluations of the workshop as it ended. Heartfelt thanks to everyone for your participation! Together, we can go much farther!