As each year, the United Nations Office on Drugs and Crime (UNODC) has published the World Drug Report, a compendium of the world’s major trends in drug use and trafficking. Furthermore, at the 2016 report, UNODC looks at how the global drug problem affects sustainable development through the perspective of the Sustainable Development Goals.

Below, we highlight a series of information taken directly from the World Drug Report 2016  executive summary

Drug Use and its Health Consequences

It is estimated that 1 in 20 adults, or a quarter of a billion people between the ages of 15 and 64 years, used at least one drug in 2014. Roughly the equivalent of the combined populations of France, Germany, Italy and the United Kingdom, though a substantial amount, it is one that does not seem to have grown over the past four years in proportion to the global population. Nevertheless, as over 29 million people who use drugs are estimated to suffer from drug use disorders, and of those, 12 million are people who inject drugs (PWID), of whom 14.0 per cent are living with HIV, the impact of drug use in terms of its consequences on health continues to be devastating. 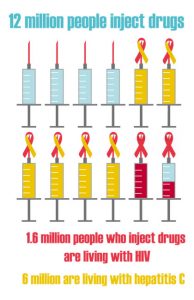 With an estimated 207,400 drug-related deaths in 2014, corresponding to 43.5 deaths per million people aged 15-64, the number of drug-related deaths worldwide has also remained stable, although unacceptable and preventable. Overdose deaths contribute to between roughly a third and a half of all drug-related deaths, which are attributable in most cases to opioids. The time period shortly after release from prison is associated with a substantially increased risk of death from drug-related causes (primarily as a result of drug overdoses), with a mortality rate much higher than from all causes among the general population.

In many countries, prisons remain a high-risk environment for infectious diseases, which is a significant concern for prison health. The prevalence of HIV, hepatitis and tuberculosis among persons held in prison can be substantially higher than among the general population. However, despite the high-risk environment and scientific evidence for effective health interventions, there are significant gaps in prevention and treatment services in many prisons around the world.

PWID experience some of the most severe health-related harms associated with unsafe drug use, overall poor health outcomes, including a high risk of non-fatal and fatal overdoses, and a greater chance of premature death. One in seven PWID is living with HIV, and one in two with hepatitis C. PWID are a key at-risk population for HIV and hepatitis, with almost a third of new HIV infections outside sub-Saharan Africa occurring among PWID. 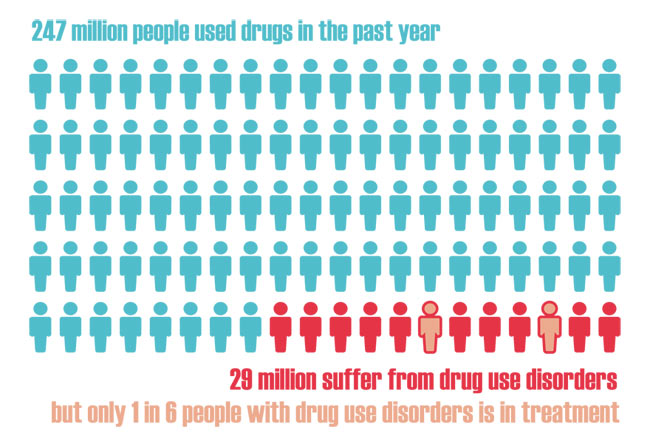 The fact that a sharp increase in heroin use has been documented in some markets (particularly North America) where it was previously declining, shows that heroin remains one of the major drugs of public health concern.

As an overall trend at the global level, the use of cannabis has remained stable over the past three years. In some sub regions, however, particularly North America and Western and Central Europe, cannabis use has increased. After a period of stability, since 2010 cocaine use has also been rising, mainly because of an increase in cocaine use in South America. On the other hand, the use of amphetamines appears to be stable.

Overall, men are three times more likely than women to use cannabis, cocaine or amphetamines, whereas women are more likely than men to engage in the non-medical use of opioids and tranquilizers.

As an organization engaged in addiction prevention and treatment, Dianova would like to reaffirm its commitment to helping those suffering from substance abuse regain self-confidence and to supporting them on the path to self-reliance. Our approach requires a comprehensive management of individual needs as well as the active participation of the individuals in their own process of change.

In addition, we are committed to bringing about positive changes in drug policies in order to reduce the stigma and discrimination experienced by drug users and people in recovery.