Every year, an estimated 246 million children suffer school-related violence and girls are the first victims of these abusive situations 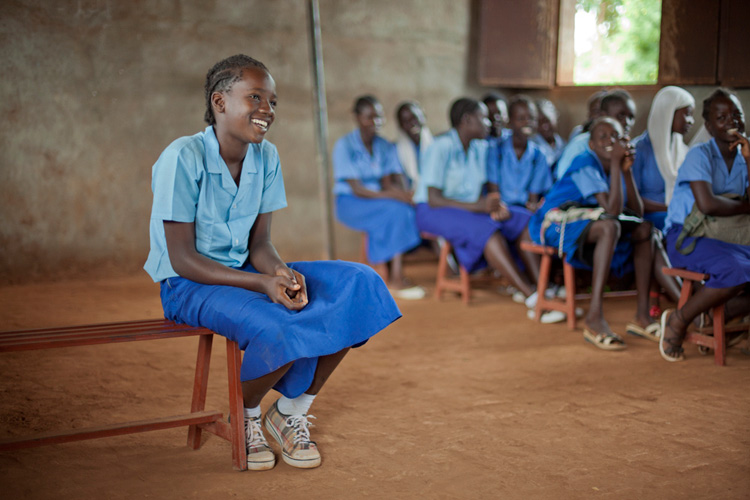 investing in the education of girls is one of the most inclusive approaches of human development – Photo: Oxfam East Africa via Flickr – licence: CC BY 2.0

By Pierre Bremond – There is evidence that the education of women and girls has a positive impact on economic, social, cultural and public health development, particularly in developing countries. When women are educated, they become empowered to participate in family decision-making and community life; they are better prepared to protect their own health and that of their loved ones.

Educating  girls also has a multiplier  effect. When you educate a girl, you give her the ability to have a greater influence on the future of her own children’s education. The education of girls benefits society as a whole, including: the girl herself, her family and future generations, the community in which she lives and even the entire country that will derive dividends from the girl’s education in terms of increase in growth points and reduction of child mortality and extreme poverty.

Even with access to education, girls still face many barriers:  educational costs, cultural norms and gender roles (specifically prescribed for girls such as helping in the kitchen and with household chores), early marriage and early motherhood — responsible for 15 to 30% of secondary female student dropouts — or even the violence they encounter at school.

Thanks to the efforts of the United Nations, particularly through the Education For All program, so many girls have never before been enrolled in school than during the last decade. Currently, while the international community renews its commitment to the 2030 Education Program, more and more girls will be enrolling in schools over the next years. However, enrolling is not enough, they must stay in school! One of the greatest challenges facing schoolgirls and female students is school-based violence.

Plan International defines school-related gender-based violence as ‘any act of sexual, physical or psychological violence inflicted on children in and around schools due to stereotypes and roles or norms assigned to them or expected of them because of their sex or gender identity’. This type of violence affects hundreds of millions of children. It is a phenomenon that affects all countries of the world, regardless of their social, cultural or economic differences.

The Magnitude of the Problem

Gender-based violence in schools constitutes a serious infringement of children’s rights, and the fundamental right to be protected from all forms of violence, including those in school. Such violence can have dramatic consequences on the following: their physical health (eating disorders, substance abuse, injuries, unwanted pregnancies, sexually transmitted infections); their mental health (anxiety, depression, self-harming, post-traumatic stress); their academic progress (falling grades, inability to concentrate, dropping out of school) and more.

Unfortunately, this is an almost universal problem singling out girls as the most vulnerable. According to Plan International, schoolgirls of all ages have repeatedly suffered harassment or sexual assault, discrimination based on their sex, physical and psychological intimidation and even rape at school. Many report that they have been publicly humiliated by school officials simply because they are girls.

Adolescent girls report that some schools do not have toilet facilities adapted to their needs, and this is why many prefer not to attend school during their menstrual period. All of this violence occurs primarily in countries where the education of girls is often considered problematic, and abusers may be classmates as well as teachers and other authority figures. Moreover, this violence does not stop at the doors of the institution; it also takes place on the way to school or during extracurricular activities. 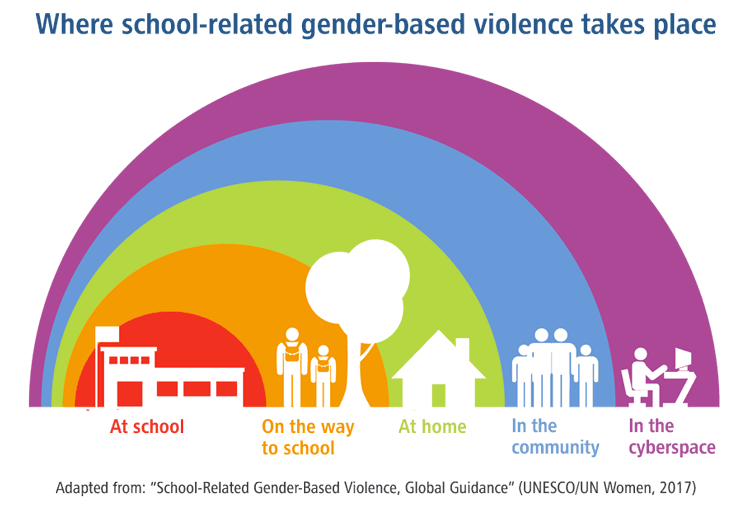 According to the ‘Hear Our Voices’ study carried out by Plan International, many of the 7,000 young people surveyed about their perception of equality indicate that they fear for their safety inside and outside the school, while more than 25% of girls report that they ‘rarely’ or even ‘never’ feel safe on the way to school. Of the 246 million children who are bullied or victimised every year in and around schools, girls are by far the most vulnerable.

Unfortunately, this form of violence remains misunderstood, seldom reported and rarely combated. The lack of available studies is partly related to socio-cultural differences as well as to violence  classification that fails to sufficiently take into account gender dimension. For example, bullying is generally considered neutral because it affects both boys and girls. Yet many examples of bullying are part of gender-based violence and have their roots in social and institutional context, rather than in individual deviations or pathologies.

This is why the full extent of the problem of school-related gender-based violence is still unknown; yet information and the number of incidents reported so far indicate that urgent action is required. According to the UNICEF report ‘Hidden in Plain Sight,’ the school environment is rife with several forms of abuse such as the bullying of one in every three students aged 13 to 15 years; sexual harassment; corporal punishment; cyber-bullying as well as different types of homophobic bullying. 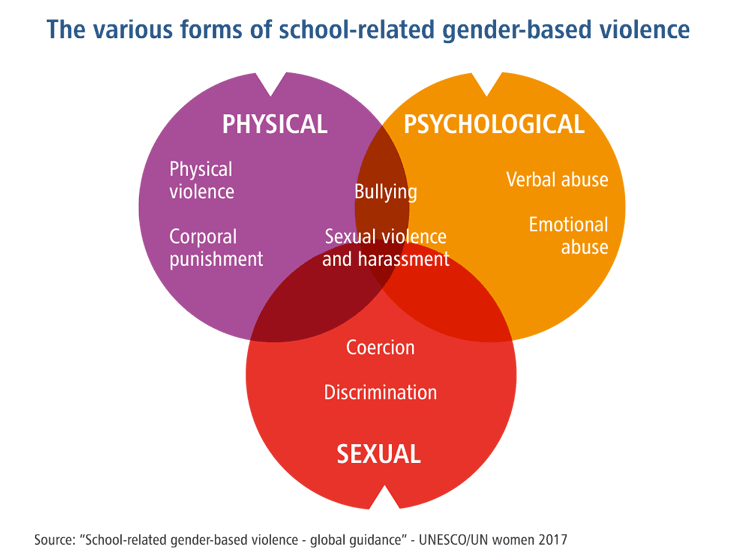 Education is an essential part of the social, emotional and psychological development of young people. As such, the school itself is the institution with the greatest potential for empowering individuals, promoting gender equality and preventing violence against women and girls. But adequately teaching sound educational content is still required. We can for example mention the comprehensive sexuality education, which incorporates a non-stigmatising, gender-sensitive and fundamental rights teaching approach that seems to play a key role in addressing sexual and gender-based violence, according to the “We Want to Learn About Good Love” report published by Plan International UK and promoted by UNESCO.

The content of this report should serve as the vector of change in individual behavior and social norms centered around violence and gender equality. The common theme of this report is designed to encourage students to question and overcome gender-based violence and discrimination. In this way, young people may be able to identify what constitutes abuse, bullying or violence in order to protect themselves and others. Finally, young people should have the opportunity to gain a better understanding of gender and sexual diversities in order to fairly deal with these concerns.

More on this issue