Becoming part of the digital world is crucial to empowering women and girls who can learn marketable digital skills, create career pathways, and go beyond gender stereotypes 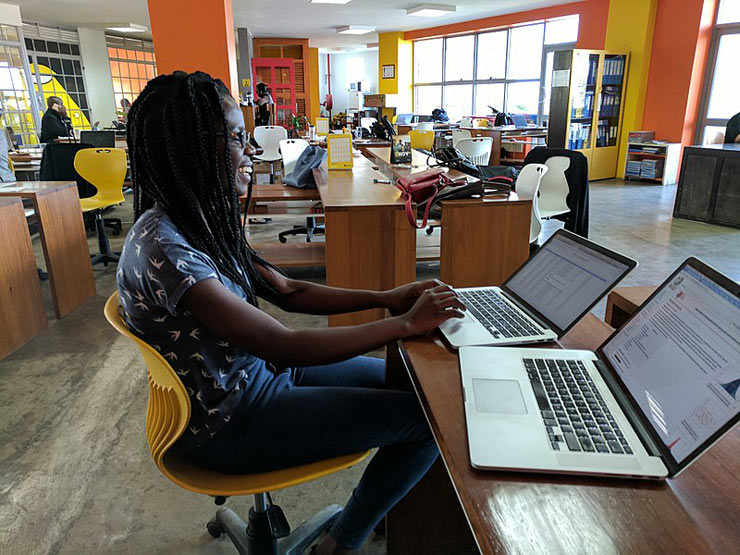 ‘The ICT gender gap is not accidental but it is reversible” – solar data analyst at work in Kenya – photo Dwalsh3, own work – CC BY-SA 4.0

By Kaitlin Drape – A side event during CSW62 entitled “Cracking the Code: Empowering rural women and girls through digital skills,” sponsored by UNESCO, explored the gender gap within the digital world, and what is being done to close that gap. “The gender gap is not accidental but it is reversible,” said Saniye Gulser Corat, Director of the Division for Gender Equality in the Office of the Director-General at UNESCO headquarters.

Women and girls are underrepresented in Information Communication Technology (ICT), most of all in rural areas where women do not have phones or computers. Literacy is also an insurmountable obstacle to being part of the digital arena, and two-thirds of the 700 million adults who are illiterate are women. Though the number of digital initiatives have increased in the last few years, Ms. Corat said, there still is greater difficulty impacting rural areas. The panel discussed the programs they have implemented to empower women and girls in urban and rural settings through training in STEM (Science, Technology, Engineering, and Mathematics) and ICT skills.

Several initiatives are trying to change that reality. Kwasi Gyan-Apenteng, representing the Ministry of Communications of Ghana discussed the country’s “ambitious national digitalization program with connectivity for the underserved rural communities.”  For example, their “Girls Can Code” initiative has trained 300 girls from 10 junior high schools in coding and ICT. They also take part in a major initiative called Africa Code Week, which has become a highly successful yearly event which includes 35 African countries. Africa Code Week, which sponsors hundreds of coding workshops all over Africa, last year included a specific focus on girls, and some 538,000 girls were trained in digital skills during the workshops.

Roland Lindenthal from Germany’s Ministry for Economic Cooperation and Development, explained that Germany was instrumental in adding digital education to the agenda for the G20 meeting. “We were amazed at the overwhelming support we got from all G20 countries.” This resulted in a new program called eskills4girls which sponsors coding initiatives and networking meetings.

Often the private sector plays a crucial role in promoting ICT and STEM training in developing countries. For example, Microsoft has partnered with ProMujer, an organization which empowers women in Latin America. According to Jessica Olivan, Director of Strategic Partnerships for ProMujer, Microsoft helps train women in coding and building websites to promote their small businesses.

In some cases, rural women – many of them illiterate — are trained to install and maintain high-tech equipment. The Barefoot College, established 45 years ago, has trained women from 93 countries to install and maintain home solar systems. Known as “Solar Mamas,” these women take their skills back to their rural communities, providing power to homes and teaching other women become solar engineers as well.

Technology is also being used to support women who have been abused or harassed, a topic that was addressed in the panel entitled, “Addressing Sexual Violence through Technology and Crowdsourced Data” sponsored by Red Dot Foundation.

ElsaMarie D’Silva founder and CEO of Safecity, an organization based in India, explained how the group uses crowdsourcing software to pinpoint locations where harassment is prevalent. “We are looking for a dominant trend,” she said by using the “power of the crowd” in reporting harassment episodes. The software can map high incidence areas of harassment being reported which might be a specific office, school, or even a specific geographical location.

A representative from Red Elephant Foundation, also based in India, explained their project called Saahas (which means “courage” in Hindi), which is a mobile app with listings of support organizations such as counselors, medical and legal assistance, education, emergency services and helplines for victims of harassment, abuse and rape. The service is now in 196 countries and the database includes information on more than 20,000 organizations. The goal is “to help survivors of violence” with a “one-stop for resources.”