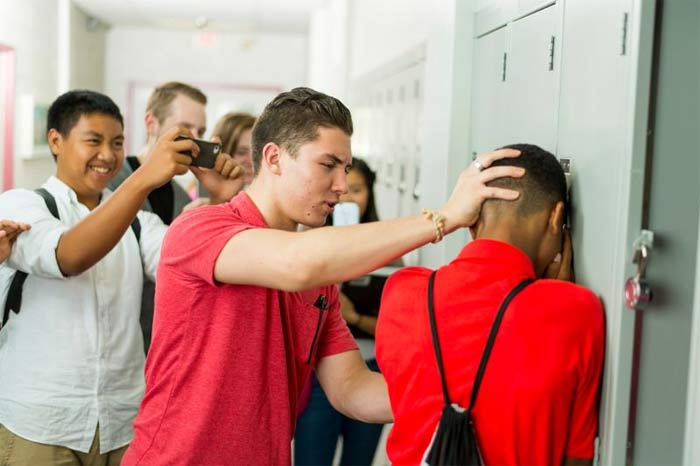 School violence is a daily reality that denies millions of children and young people the right to education. School violence in general refers to physical aggression and psychological harassment, including threats, intimidation, insults, excluding someone from a group on purpose, etc.

A report published in March by the Economic Commission for Latin America and the Caribbean (ECLAC) and UNICEF indicates that Chile is the country whose school performance is most affected by the level of violence in schools. Although Chile is one of the countries with the lowest rates of violence in schools and the highest education levels, with Costa Rica and Uruguay, the impact of this violence on Chilean youths reaches an average of 38 points, highest among the 15 countries studied.

Bullying can be defined as repeated, aggressive behaviours intended to hurt another individual, physically, mentally or emotionally. These behaviours are characterized by three criteria: (1) hostile intent, (2) imbalance of power (the strong against the weak), and (3) repetition over a period of time.

One factor to consider is that in countries with relatively low levels of violence, such as Chile, every situation of violence, including psychological violence, is seen as a violation of one’s rights. On the other hand, countries with the highest rates of violence tend to report severe physical violence only, as students are more accustomed to living in a violent environment – even though the impact of the violence is always dramatic, regardless of the country concerned.

Lastly, one should not consider that violence only concerns those who are the victims of it. As evidenced by the overall impact of violence on performance, the inability of schools to establish common living standards and enforce them in a healthy learning environment generates a feeling of insecurity that has a negative impact on all students.

The “Coexistence” programme of the Dianova Chile Foundation

The Dianova Chile Foundation provides training, consultancy and support services at the workplace and at school. Within the framework of these educational services, the Foundation is registered in the National Register of Educational Assistance – under the auspices of the Ministry of Education (MINEDUC) – a register of persons and organizations qualified to provide pedagogical or technical support to educational institutions.

The Foundation implements services designed to meet the needs of the education system, both in technical and administrative terms. It is with this in mind that the Foundation’s professionals develop initiatives aimed at improving the atmosphere in schools, beyond the traditional disciplines and pedagogical work, with a view to preventing all forms of violence.

One of these initiatives is the Coexistence and Violence Prevention Programme. This programme is now being implemented by the Dianova Chile Foundation, under the supervision of the Secretariat for Crime Prevention and through the National Public Security Fund; it is underway in five educational institutions in the municipality of Curico (Region of Maule). The programme’s direct beneficiaries are the teachers and other teaching staff, and parents and pupils from the various institutions concerned.

The programme was officially launched at the Catholic University of Maule in the presence of many attendees, including parents, students, representatives and professionals from the educational community and those of the treatment and children’s aid networks, and representatives from the municipality’s police departement. Several representatives of regional and local authorities were also present, including the Governor of the province, Ms. Cristina Bravo, the regional coordinator of the Under-secretariat for the Prevention of Crime, Mr. Luis Moyano, the Vice-President of Dianova International, Mr. Davide Brundu, the Director of the Basic Training Department at the Catholic University of Maule, Dr. Leonor Cerda, and Ms. Paulina Bustos, Director of the Municipal Education Department (DAEM).

The event provided an opportunity to take stock of the phenomena of school violence and how to deal with them. Among the speakers, Edgardo Roco, a psychologist in charge of the DAEM School Life Department, emphasized the new forms of school life management within the colleges and María de los Ángeles Guerreo, a social worker, addressed the theme of the indicators measuring the working climate, violence and well-being within schools. 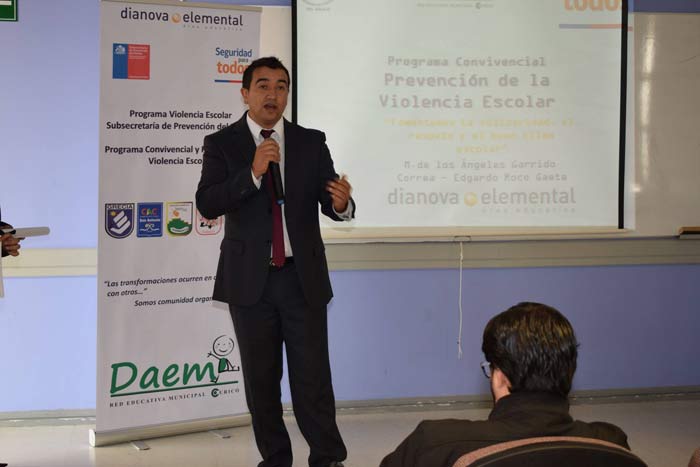 Inauguration of the “Coexistence and Violence Prevention Programme”