On the occasion of International Literacy Day, September 8, we focus on the action of FAPE, member of the Dianova network, in the Democratic Republic of the Congo 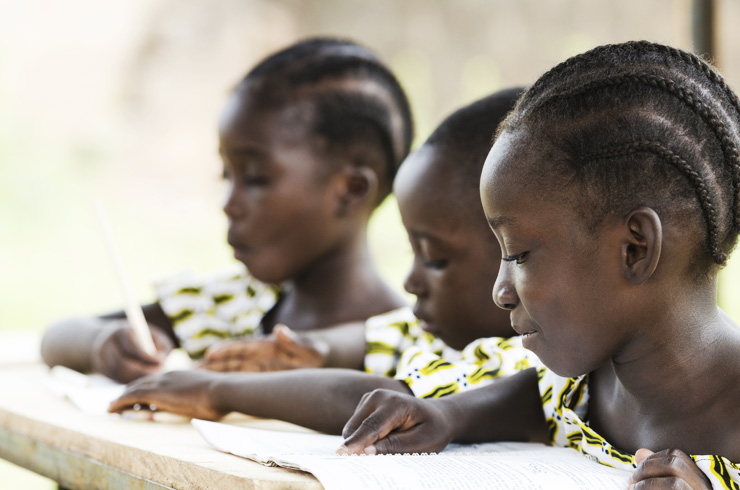 FAPE relies on literacy to end the poverty that affects a large number of women in Congo – Photo: Riccardo Mayer, Shutterstock, Licence CC

By Mwami Mikunda-Babula – In recent decades, the Democratic Republic of Congo has made significant progress in the education sector. Completion rates at primary school, for example, have increased considerably, from 29% in 2002 to 70% in 2014. Despite this progress, the country remains near the bottom in global education rankings, with a very large number of children out of school.

Women are primarily affected: according to the results of the Second Demographic and Health Survey[1], only 64% of women (15-49 years old) are literate, compared with 88% of men, while a significant proportion of the population has no education at all (15% of women and 4% of men). Literacy rates among women also vary significantly between provinces, from 93% in Kinshasa city to 51% in Kasai Occidental province.

The situation in the Fizi Territory

In South Kivu province, 39.9% of women are illiterate, and the Fizi Territory, situated in this province, is one of those where girls are the most marginalized in terms of education opportunities. Fizi Territory is one of the country’s most disaster-stricken areas. In 2010, this rural region was the scene of armed conflicts that led to numerous population displacements, the destruction of infrastructure (especially schools) and a precarious humanitarian situation. Since then, Fizi Territory remains a stronghold of armed groups whose presence resulted in permanent instability.

This situation has disastrous consequences for the development of the region and in terms of access to education for many children living in this area.

More recently, following torrential rains in early 2020, severe flooding has affected five provinces of the country, including South Kivu. In Fizi territory, assessments by NGOs have reported a total of 45,695 people having lost their homes, essential household items and other valuables, while five health centres were affected and 19 primary schools partially or totally destroyed.

On top of this predicament, girls are often marginalized and excluded from the education system. In the Fizi Territory, many families believe that only boys should be educated. As for girls, they are deemed to be more useful if they stay at home and help with household chores. Later in life, they will be expected to look after their future husband’s (preferably male) offspring. No need to go to school for that.

This way of thinking, which is still far too widespread in many rural areas – not only in the DRC, but also in most countries of sub-Saharan Africa, South and West Asia and several Arab states – is a huge obstacle to the region’s development. As Agnes Odhiambo, Senior Researcher, Women’s Rights Division, for Human Rights Watch, pointed out: “When girls get a quality education, they gain the skills and knowledge they need to achieve their potential and transform their lives, families and communities.”

Girls’ education is key to achieving the SDGs

It is critical for us to understand the importance of education for women and girls as an essential step along the path to gender equality and a catalyst for change in the lives of women, their families, their communities, and the world. The Sustainable Development Goals (SDGs) are interconnected, that is to say the key to success for achieving one SDG involves tackling issues associated with another. It is especially true for girls’ education: educating girls and promoting gender equality are key for the world to deliver on all the SDGs.

We need to combat negative assumptions and attitudes about men’s and women’s roles. It is time to give all girls the opportunity to learn and grow, to help their own country develop.

Overcoming poverty means making as many people as possible literate. And to achieve this, we must put an end to the marginalization in Fizi Territory and the whole country.

The action of the FAPE association

Founded in 2004, the association Active Women for Environment Protection (in French: Femmes Actives pour la Protection de l’Environnement or FAPE) is based in Mboko, South Kivu province, as a non-political and non-profit organization. FAPE is committed to promoting women’s rights with the aim of helping Congolese women become self-reliant, free and independent individuals, capable of standing up for their rights and that of their children while engaging in the development of their communities. FAPE is a member of the Dianova network.

FAPE is particularly committed to improving literacy rates. Among its latest achievements, in 2020, the association implemented a learning programme (reading, writing and arithmetic) currently benefiting 52 women. In addition, the association participated in the construction of six classrooms (Enzi primary school) that will receive 302 children. Lastly, FAPE is committed to improving girls’ education (3-12 years old) through the construction of six classrooms within the Azina-Mboko ORAC school complex. 240 children will benefit from the project.

Education meeting with parents and children members of the FAPE association – Photo: FAPE, all rights reserved

Promoting literacy in the Fizi Territory

FAPE is working with local and international stakeholders to implement a long-term strategy to help improve literacy rates in Fizi territory. This strategy involves a number of steps, including:

More information on the activities of FAPE

Dianova International works tirelessly to secure funding from various international and European programmes, foundations and the general public. With their generous aid, we are able to develop our activities and support our members. If you wish to participate and donate on a regular basis, you may become one of our supporters.

Born in Mboko, Fizi Territory (DRC), Mwami Mikunda-Babula, a married father of five, holds a Bachelor's degree in Social Work and Community Development and is preparing a Master's degree in this field at the Hope Africa University (Bujumbura, Burundi). Mwami is currently Project manager for the FAPE association.