Consumption, intoxications, and opioid-related deaths in the United States and Canada could foreshadow a similar crisis in Latin America 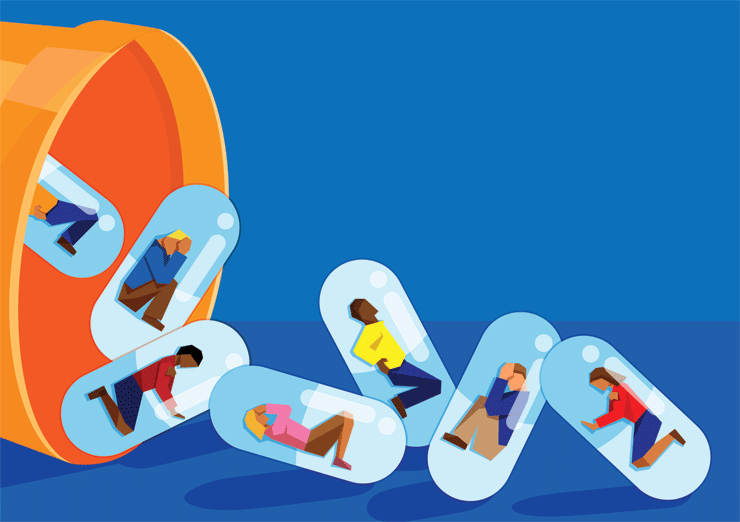 For now, Latin America, has been spared by a plague which ravaged the US and Canada… For how long? – Image: Shutterstock, licence CC

By María Victoria Espada – Over the last years, the use and abuse of opioids, including prescription analgesics, heroin, and synthetic opioids like fentanyl, have significantly increased worldwide. The “opioids crisis” has generated a surge in overdose deaths, negatively impacting public health and the economic welfare of nations. For now, Latin America, has been spared by a plague which ravaged the US and Canada… For how long?

As stated by The New York Times, almost 72,000 US citizens died from a drug overdose in 2019, and 2020 will be even worse, with an increase of 13% already registered as compared to the previous year.

Opioid-related overdose deaths are higher than deaths from HIV, car crashes or gun violence at their peak, and their acceleration over the last few years has reduced the average life expectancy.

The Centers for Disease Control and Prevention (CDC) estimate that in the United States, the total economic burden derived from the abuse of prescription opioids is 78 billion USD per year. This includes the costs of medical care, loss of productivity, addiction treatment, and costs of criminal justice interventions.

Even though in some regions certain improvements have been seen, heroin overdose deaths have been increasing since 2007, according to the National Institute on Drug Abuse (NIDA).

Increased use of Fentanyl: 50 times more potent than heroin

The opioid crisis has also been felt in neighbouring Canada. In accordance with data from Canadian Centre on Substance Abuse (CCSA), opioids caused 5,000 demises in 2017. The total economic burden was approximately 6 billion CAD, in which 72% went to productivity losses and higher health care costs.

Similarly, the illicit use of Fentanyl, a synthetic opioid used in the treatment of severe chronic pain has increased dramatically: in 2019 this substance was responsible for 75% of opiate-related deaths, vs 49% in 2016.

According to the United Nations Office on Drugs and Crime (UNODC), most of the surge in Fentanyl use and other highly potent analogues in North America is due to a complex set of factors. These factors include: high rates of non-medical opioid use, the increase in the illicit manufacture of the substance with simpler, more efficient methods, and the adulteration of illicit supplies of ‘natural’ or semi-synthetic opiates with fentanyl, a synthetic drug much cheaper to produce.

In addition, recent evidence from the US Drug Enforcement Administration (DEA) suggests that attempts to manufacture fentanyl in the region, especially in Mexico, have increased, reducing trafficking from China.

Some of these data are part of the regional overview presented at the online seminar “Opioids in the Americas: How to identify and respond to emerging epidemics“ on July 22, with participation from Dianova International.

The seminar was organized by the Inter-American Observatory on Drugs (OID), a research unit of the Inter-American Drug Abuse Commission (CICAD), dedicated to provide support to members of the Organization of American States (OAS) with the aim of sharing updated information and technical guidance to prevent or anticipate an opioid epidemic in the Latin America region.

Speakers at the event explained that the triggers for the “opioid crisis” are multiple. Both in Canada and the United States, opioid prescriptions for pain relief are commonplace, as is the lack of knowledge or that of alternative treatments. In some cases though, some people’s inability to access prescription opioids may lead them to turn to the black market, while the use of prescription opioids by people for whom they have not been prescribed, such as friends and family, is also common.

Other social determinants that explain the opioid use and abuse are trauma, poverty, poor housing, and job precariousness.

A situation worsened by Covid

This situation has worsened in both countries following the consequences of the Covid-19 pandemic. Besides the reduction of direct services available to them, people who use drugs have also had major difficulties in regularly accessing or paying for their substance of choice.

Likewise, a greater use of more toxic drugs has been evidenced, with a lower tolerance due to the involuntary abstinence period, with devastating health consequences. Forced social isolation has also caused an increase in overdose deaths, particularly among single person households.

In Latin America, the opioid prevalence, both in general terms and in comparison with other drugs, remains low and consumption has only been detected in some specific groups in a few countries. This was evidenced by a research project carried out in 2019 with the participation of five countries: Argentina, Mexico, Peru, Dominican Republic, and Uruguay by the Inter-American Observatory on Drugs (OID)/ CICAD.

Dependence among women is higher

As regards gender differences, the research project found that opioid consumption is higher in men than in women in absolute terms. However, women tend to develop more important dependence problems after using prescription opioids. In addition opioid use is more frequent in women whose partners have opioid use disorders – it is even considered as an important risk factor.

In spite of this situation, the treatment offer for women is significantly lower than for men and, in the majority of the cases studied, important aspects such as childcare are not taken into account when designing treatment programmes. Patients interviewed, both women and men, tend to value residential-type and substitution treatment programmes more than other programmes.

Regardless of its better situation in comparison with Canada and the United States, the Latin American region is not exempt from risks. Among them, one can mention that a proximity to large opioid markets may increase use, as shown in Mexican cities bordering the United States.

Availability of drugs also facilitates consumption without medical prescription, as was shown among health professionals in Argentina and Uruguay, especially in the injected form. A rising need may also boost the market, as evidenced among opioid consumers in the Dominican Republic who have started with heroin in the US or in Europe. Finally, an eventual price drop could reverse the limitations derived from access difficulties, as was concluded in the case of Peru.