2017 ended without news in terms of financing to alleviate this crisis; now everyone looks to Congress 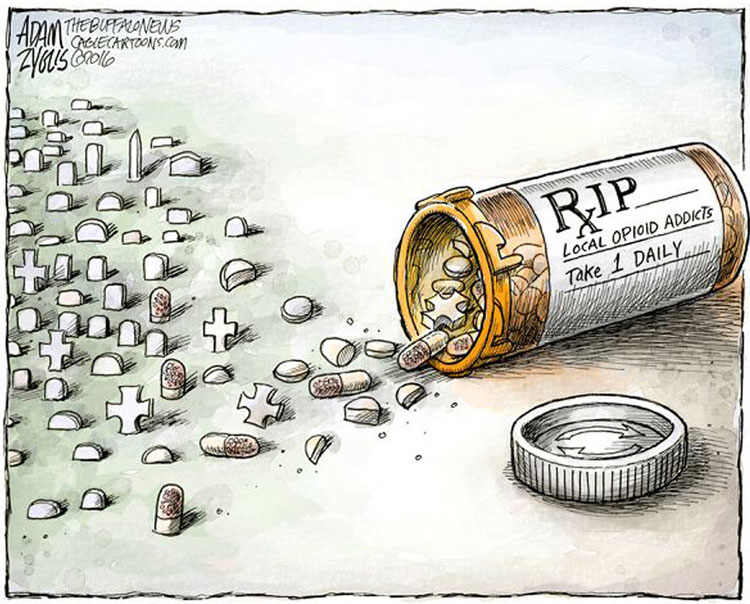 By Ignacio Torres – The implementation of the measures to alleviate the crisis is hindered by the scarce resources allocated to the Emergency Fund for Public Health. Without an effective solution, it is estimated that half a million people could die in the next decade.

The situation is both alarming and discouraging: opioids are killing more people in the United States than did the Vietnam War and the HIV/AIDS epidemic at their peaks. Every day an average of 175 lives are lost and more than 560,000 died between 1999 and 2015 due to the epidemic.

Last October, President Donald Trump declared that the opiate crisis was a “public health emergency” because of the overflowing use of both strong pain-relieving drugs (hydrocodone, oxycodone, morphine, etc.) and illegal opiates such as heroin. However, many considered the measure insufficient – especially organizations dedicated to helping substance abusers – because it didn’t make it possible to prompt the allocation of federal funding, as it would have been with a “National emergency” declaration.

What’s missing is more money, said Dr Mitchell Rosenthal of Phoenix House, a not-for-profit addiction treatment provider. “We need significantly more funding to the states on the front lines of this crisis, otherwise they won’t be able to implement the prevention and treatment programs that can save so many lives,” Rosenthal said.

A chronic disease, not a moral failure

While the task of allocating resources remains pending in Congress’ hands, the President’s Commission on Combating Drug Addiction and the Opioid Crisis released a report with 56 recommendations just six days after the health emergency declaration, insisting that addiction is a chronic disease and not a “moral failing.”

One of these recommendations includes the expansion of “drug courts” throughout the United States. Drug courts are specialized court docket programs that target criminal defendants and offenders who have alcohol and other drug dependency problems. Drug courts adopt a public health approach using a specialized model that encompasses different judicial and socio-health services to help people achieve long-term recovery.

According to the 138-page report, “Drug Courts are known to be significantly more effective than incarcerations, but 44% of US Counties do not have an adult drug court”.

The commission, led by New Jersey governor Chris Christie, also suggests continuing the expansion of, and strengthening of access to, medication-assisted treatment using methadone and buprenorphine, which have proven to be particularly effective against drug addiction. However, noted the Commission, “Only 10.6% of youth and adults who need treatment for a substance use disorder receive that treatment. This is unacceptable. Too many people who could be helped are falling through the cracks and losing their lives as a result.”

The experts also recommends that the Federal Government maximize the impact of its support for more effective programs and policies to reduce the number of substance abusers. To achieve this, the commission believes that the Office of National Drug Control Policy must establish a coordinated system for tracking all federally-funded initiatives and invest only in those programs that achieve quantifiable goals and metrics.

The Commission also insists on the Administration’s support of the Prescription Drug Monitoring Act to mandate states that receive grand funds to comply with its requirements, including data sharing. “Physicians and other health professionals often do not have adequate training in substance abuse disorders (SUD) to assess patients” states the Commission. Additionally, it recommends that the Department of Health and Human Services (HHS) coordinate the development of a national curriculum and a standard of treatment for all specialists who prescribe these substances.

The 80s and parts of the 90s saw the horrors brought on by the consumption of crack, an illegal drug with devastating effects—especially in big cities like Miami, New York, and Los Angeles. Methamphetamine also wrought havoc in the mid-90s, mainly in San Diego, San Francisco, Denver, and Hawaii. However, opioid abuse is an immense challenge, as no corner of the United States has been unscathed by this epidemic.

Now everyone looks to Congress for funding. 2017 ended without news in terms of financing to alleviate this crisis, and started 2018 the discussions continue. At this moment, the House of Representatives has proposed $15 billion in funds while the Senate has raised this number to $45 billion. “We’re looking forward to hearing from Congress as to how they intend to address this,” said Acting HHS Secretary Eric Hargan

However, the efforts are on track. On January 10 the Bipartisan Task force to Combat the Heroin Epidemic of the House of Representatives released its legislative agenda for 2018 which includes – in addition to a boost to increase funds – 17 new measures aimed at tackling the epidemic with a focus on prevention, treatment, recovery and law enforcement.

The bipartisan task force also seeks to ensure that new resources be allocated to the Public Health Emergency Fund. Among other arguments, the task force declared that the epidemic has become a burden for the economy, considering for example that at least six million jobs remain vacant because potential workers fear drug screenings.

In the meantime President Trump recently signed the Interdict Act, a measure that will give border patrol agents better tools to detect and stop the smuggling of highly deadly fentanyl and other illegal drugs into the US. Border and customs agents will be provided with $15 million for additional portable chemical screening devices to check packages, mail and travelers.

In any case, bringing the opioid epidemic to an end will require much more than a few high-tech instruments and a ‘national emergency’ declaration. Without massive federal funding, i.e. in the tens of billions of dollars, the crisis can only continue. However, money isn’t everything; history is littered with costly policies meant to fight drug use that only made the situation worse.

Implementing a solution requires the American society to balance several big issues including the needs of pain patients, the shortfalls in how the country approaches addiction (beginning to think of addiction not as a moral failure but as a medical problem), the need to implement effective and measurable treatment policies (and not merely morally satisfactory), and the need to easier access to treatment for all.

This endeavor demands to put aside political and bureaucratic lethargy, we must act quickly if we are to prevent 500,000 more people from dying in the next 10 years.