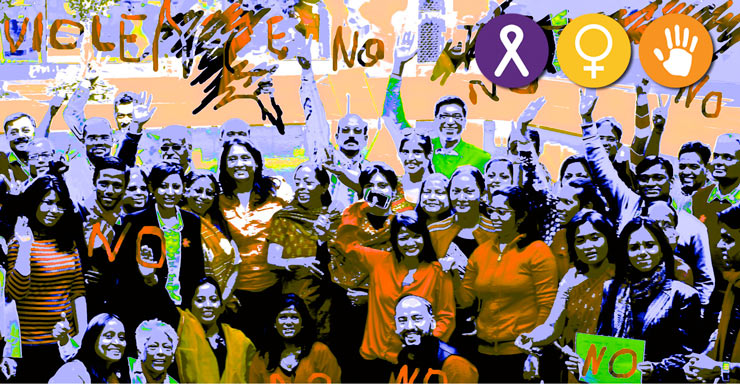 “When you’re in an environment with just women, women that have been through the same things that you’ve been, you have a tendency to want to share, because you listen other people’s stories and you say “damn, I went through that same thing” – Image: “No to Violence against Women”, François Decaillet, licence CC

By María Victoria Espada – to coincide with the 65th session of the Commission on the Status of Women (CSW65), Dianova co-organized a parallel event on the 22nd of March as part of the NGO CSW65 Virtual Forum on the following topic: “Addressing gender-based violence, a key element in gender-sensitive addiction treatment programmes”.

One in three women…

According to data from UN Women, one in three women worldwide experience physical or sexual violence by an intimate partner. Furthermore, violence against women, especially domestic violence, has intensified since the beginning of the pandemic. At the same time, several studies have shown the close relationship between addictive behaviour and gender-based violence. On one hand, women who consume addictive substances are at greater risk of being victims of violence perpetrated by their intimate partners. On the other hand, women’s consumption of these substances is a strategy to cope with the violence they suffer.

However, given that 80% of patients receiving treatment are men, the specific needs of women who use drugs are not being addressed sufficiently. Because of this, “ it is crucial to identify, take into account and address the impact of the violence on women’s lives in the addiction treatment programmes, because violence and drugs generate specific and complex dynamics“, remarked Gisela Hansen, Therapeutic Coordinator of Dianova’s Treatment Programmes.

For Gisela, gender-sensitive treatment programmes must cater for features beyond the male/female binarism and eliminate gender-related disadvantages.

A good start when designing these programmes is to rethink traditional programmes from this perspective and also to replicate examples of existing good practice. Moreover, providing teams of professionals with specific training and creating support groups for women are requirements for the design of these programmes.

In the United States, racial and ethnic minorities experience the problems of violence together with alcohol and drug use at rates significantly higher than non-minorities, due to the higher levels of poverty, unstable homes and lower levels of education in these communities. Shawny Robey, Chief Operations Officer at Odyssey House Louisiana, stated that “the specific effects that certain people suffer must be treated in safe environments with patients of similar characteristics, with the aim of treating the underlying problems and identifying a way forward for recovery“.

Shawny explained that with more support, complementary programmes aimed at women with dependent children could be developed, which would have a very positive impact on both women and children.

Unfortunately, women are still afraid to disclose the details of their situation and ask for help, due to the risk of being stigmatized and experiencing negative social sanctions, even from health professionals. Jorgelina Di Iorio, Harm Reduction Programmes Coordinator at Intercambios Asociación Civil, explains that the possibility of being arrested and losing custody of their children, as well as the greater economic difficulties they experience, form barriers to accessing treatment services.

Given the high number of women who use drugs in Latin America and the Caribbean, Jorgelina considered it necessary to study in more depth the existing links between women and drugs, including the potential harm that could be caused to them by current policies and punitive laws.

Additionally, “it is fundamental to involve women in the provision of services, to encourage women who use drugs to mobilize and, without a doubt, to decriminalize their use”.

To improve policy-making on drugs, it is essential that the knowledge and experience of civil society organizations are incorporated into the discussions of international organizations. An example of this is the Outcome Document of the 2016 United Nations General Assembly Special Session on the world drug problem (UNGASS 2016) which included a chapter on the following overlapping topics: drugs and human rights, young people, children, women and communities. In the words of Nazlee Maghsoudi, Chairperson of the New York NGO Committee on Drugs (NYNGOC), “it was a great achievement for civil society“.

The COVID-19 pandemic also brings with it opportunities and challenges for the organized work of civil society.

On the one hand, greater digitalization appears to be an opportunity to widen and strengthen its significant participation on a global scale. On the other hand, the digital gap and restrictions on accessing virtual platforms can set a dangerous precedent for the future. Therefore, as Nazlee pointed out, for policy-making to be successful, it is crucial that civil society maintains and widens its scope of activity in international organizations.

“For me, being in a co-eded environment, there were some things I would share and some things I wouldn’t. But when you’re in an environment with just women, and women that have been through the same things that you’ve been, you have a tendency to want to share, because you listen other people’s stories and you say “damn, I went through that same thing”. These women were strong women, very educated and able to help other women dealing with the addiction process and abusive relationships, able to make us realize that hey, this is not your fault, not your fault.”