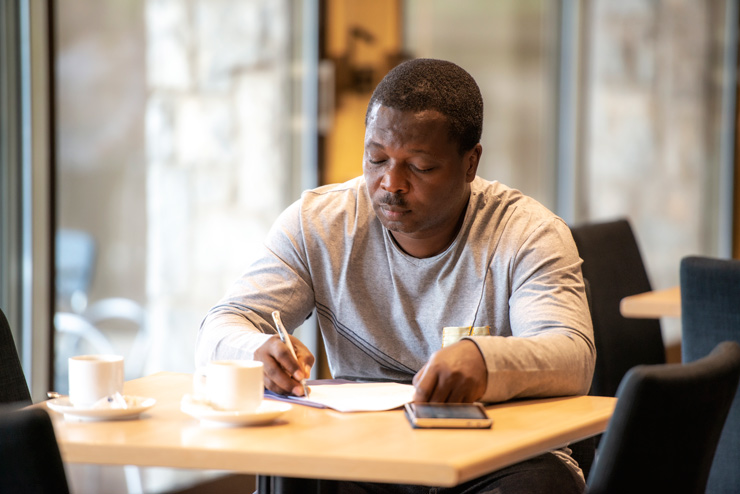 GRADH focuses on changing people’s behaviour in order to educate, raise awareness, prevent the spread of communicable diseases and promote good hygiene practices to improve the health of the community – Photo: Daniel Urrutia, all rights reserved

Eugène is also president of the Groupe de Réflexion des Amis pour le Développement de l’Humain [Reflection Group of Friends for Human Development]. GRADH (the acronym in French) is an organization that aims to transmit health messages to the Togolese people through theater performances. Eugene is currently finishing a doctoral thesis on human resources management. We had an interview with him during the annual meetings of the Dianova network in Castelldefels (Spain).

Can you tell us more about GRADH?

Established in Togo in 2004, GRADH is an organization operating in the fields of health, education and culture. GRADH is made up of several theater groups in Togo and abroad. Its strategy is to go out to the people and communicate with them to change their behavior. We use the theater, stories and songs to send out the message. We meet with people in the street, in schools, churches, squares, etc. to present skits. These are generally enjoyed by the public because they have the opportunity to intervene – they can make corrections to the skit or suggest a happy ending, for example.

Every year towards the end of November, GRADH organizes FESTHES, a festival in theaters for education and health. Twelve countries participate, including France and Germany. In Africa, the participating countries include Ivory Coast, Mali, Congo, Ghana, Benin and Burkina Faso. The festival’s strength is that, although it receives no subsidies, the theater troupes accept responsibility for their own travel expenses. For example, a participating troupe from Benin pays its own travel expenses while food and lodging are covered by the organizers. This type of arrangement has so far enabled us to maintain our commitment every year and make the festival a meeting place to exchange ideas, strengthen capabilities and communicate with the people.

Can you tell us a little about the shows? Does improvisation play a role? What is the public’s role?

The skits last fifteen, twenty, up to thirty minutes. Everything is written and prepared in advance. But after show ends, the public can ask someone to replace one of the actors or actresses and replay the scene until they are satisfied with the outcome. For example, one of our skits presents a twelve-year-old boy who wants to use condoms. The public, on the other hand, thinks that twelve years is much too early to have sexual relations. So, someone volunteers and, after coming to an agreement with all the “real” actors, the scene is replayed, this time with the twelve-year-old boy expressing his wish not to have sexual relations yet. Thus, the skit closes on a satisfactory note for the public. 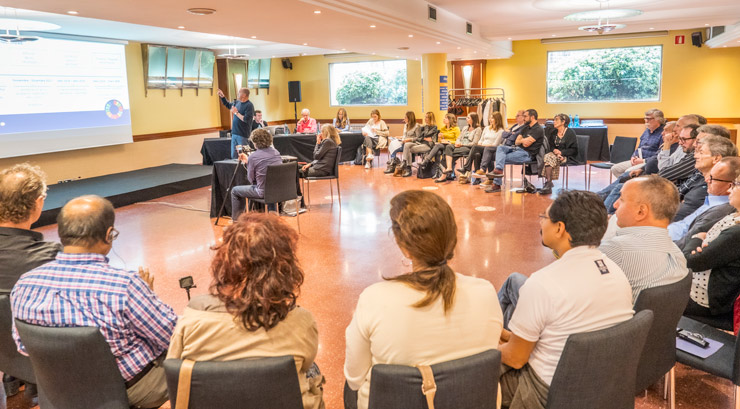 Meetings of the Dianova network 2019, with the participation of GRADH – Photo: Daniel Urrutia,all rights reserved

Do you sometimes feel like you are going against customs and beliefs? Do you think you can make an impact despite the weight of traditions?

It takes time, but some traditions or customs can be corrected. For others, it’s much more difficult. In Togo, the community is very accepting of condom use, for example. On the other hand, the Catholic Church still stands strongly against the use condoms, so we avoid this topic when we do shows in churches. Outside churches we have no problem since it’s a well-accepted practice now, including among Catholics, but priests are not ready to hear the merits of condoms praised in their churches.

Another problem is drinking water: part of the population continues to drink water from rivers. However, due to the increase in population and resulting pollution, it’s become a dangerous practice. What we do in our skits is show people that river water contains microbes that cannot be seen by the naked eye and they should therefore turn to safe drinking water, such as well water. Behavior does not change immediately. It has to be discussed, reviewed. It could require several shows, but little by little, people will understand.

Where is Togo in terms of sanitation infrastructure and general awareness of the risks of open defecation?

Much remains to be done. That’s why GRADH has embarked on a long-term campaign against open defecation. Our shows aim to raise people’s awareness of the risks they run when they continue this practice. We show them that even if a family has private latrines with proper sanitary facilities, they are still exposed to contamination by the simple fact that neighboring families do not have such facilities. Flies land on feces and then soil the food sold in market stalls and even on the family table in homes equipped with the proper facilities. A single gram of human feces can contain up to 10 million viruses, a million bacteria and a thousand parasites. We try to lead people to understand the relationship and the risks for the entire community of defecating in the open.

Unfortunately, latrine infrastructure is expensive. Constructing an eco-friendly EcoSan latrine costs 300,000 CFA francs (about €450), which is a small fortune for the average Togolese. We are trying to make them understand that they can have traditional, but improved, latrines by building simple toilets with planks and a hole deep enough that can be closed up afterwards. This will not solve the entire problem, of course, but the most important message is transmitted: you cannot defecate in just any place in the country. After people understand the risk of transmitting diseases, the second step is to convince the community itself to take charge of constructing latrines. On that point, I would like to thank UNICEF for its commitment and support in implementing the Community-Led Total Sanitation (CLTS) project.

What is GRADH’s action plan for the future?

GRADH operates based on health and education government policies. For a long time, we’ve been working with the government and other organizations on sexually transmitted diseases (STDs) and AIDS. The results have been satisfying – thanks to these joint efforts, STD rates in Togo have dropped from 6.2% to 1.8%. As for malaria – the main cause of hospital and health center visits in the country – I believe further efforts towards awareness can be made so that this disease no longer recurs in Togo. The same is true for the current epidemic of unwanted pregnancies in the school population. Lastly, we need take action against climate change, lead people to understand that the problem is real and to adopt the proper behavior and save the environment. Our strategy has not changed. We act in accordance with our funding partners and we take our services where they are needed.