Montse Rafel: After 25 years working in UNODC, what lessons stand out? 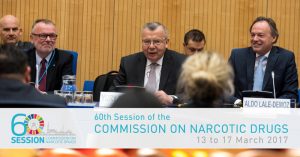 Aldo Lale-Demoz: Everything has changed. First, the issue of participation, of diversity. All of us who manage programs, projects and people know how important it is to have a diverse group. You always work much better, and you can discern solutions more quickly and democratically. And this is what happened here.

Today you see that members of civil society has access to plenary sessions, can contribute to discussions, and address a session. We recognize that civil society has much to offer. But diversity encompasses much more than civil society. It includes science, academia, global, interregional and regional organizations, brothers and sisters of the United Nations. With WHO, UNAIDS, UNDP, FAO, and with human rights agencies, there is already a lot more fluid interaction than there was before. It is much more diverse where you listen to more people.

The net result is the UNGASS Declaration, which critics complained was not progressive enough, but that we honestly believe is quite revolutionary. That countries such as Spain, the United States, Pakistan, Indonesia, and Sudan reached an agreement is a great achievement.

Second, the biggest difference may be the cause of all these changes. The previous assumptions no longer exist. I remember two things perfectly. The first is that the debate focused, to the point of exhaustion, on the supply versus demand for drugs, and vice versa. Before it was, “You, if you didn’t produce, I wouldn’t consume,” and the other would say “You, if you didn’t consume, I wouldn’t produce.” All that is over.

And civil society itself has also made this progression. Before, it was also very radicalized by one position or the other 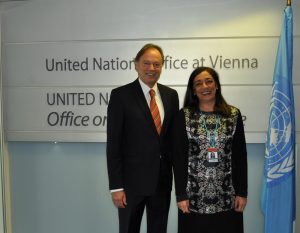 True. Not that they don’t have their logic; if there is no demand there is no production, but we all know that it’s not like that. Organized crime produces to create demand. And because of permissiveness, addictions, and the age-old desire to take psychoactive substances, that’s not going to change.

The second thing I remember is that when I arrived here, Member States, including the big ones, really believed that a couple of programs and strategies would solve the drug problem. This has also changed enormously. People are now talking about controlling the phenomenon, countering it, or at least trying to handle it based on science and methods that work. However, it is true that there are still some countries that still have as their slogan “a drug-free society”. It is a stance that I respect, as long as countries do not abuse human rights in the name of their vision of a drug-free society. In addition, this evolution has taken into consideration the legal and cultural diversity that exists in the world.

Third, and finally, what you’ll notice is that the debate is about more than just the supply and demand of drugs. It’s also about drugs and health, drugs and development, drugs and human rights, drugs and gender, drugs and the rule of law. The debate has become more sophisticated. When I began working in this field, only diplomats and police officials came here. And today, we have statistics showing that more than half of the delegates come from Ministries of Health, and/or Development. There are people who have training in human and gender rights, and everything is much more diverse. Obviously the debate is going to become much more sophisticated.

The organization of events parallel to the CND60 is a good example of this. People are eager to state their positions. This year there are more than 100 side events, analyzing all kinds of topics. That, I believe, also enlivens things a lot, makes everything more democratic and also joyful. So it has changed a lot.

Regarding the UN UNGASS Resolution, what is the most relevant part of the resolution, and what are the biggest challenges for its fulfillment?

The most relevant thing is that the drug problem, the drug issue, is seen from a health perspective, and most important, connecting it with gender issues, human rights, and development. There is no previous document, not even in the 2009 document, that is so specific regarding these issues. And you do not even know how you help us. I am Director of Operations, meaning I manage programs and technical coalition projects in 75 countries. It’s great to have this document that we can use to lobby, so that the authorities say “our tenders and policies have to align.” That to me is a huge advantage.

Another important advantage, which I was promoting well before UNGASS, more than two years ago, is the connection of drugs with crime. I think one of the best global drug programs would be a well-functioning criminal justice system. Before we would not have said that. The drug experts came here, and within two months we had a crime commission and experts working on justice issues.

As for the challenges, I think there are two major ones. One is that there are over 100 very good recommendations, very useful for everyone, but which don’t provide funds. So, of course, to me personally I’m a little embarrassed when I find myself at UNGASS promoting events in Africa, for example, and people look at us and say “well, very well, we agree”. They say to me: “Excuse me, but here our needs are so great that if we have to choose between how to use our scarce health resources for patients who have cancer or for people who have addictions, that’s an easy choice in our country. Because addicts deserve what happens to them. ” We still have many countries with that kind of absolutely horrible and wrong approach. So, we have some very good and solid recommendations, but putting them into practice is more complicated. 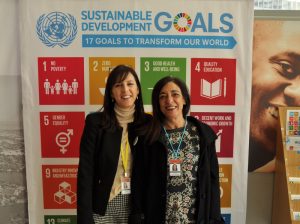 We are working very hard with other United Nations agencies and we will have to be much smarter about how we use the scarce resources we have to advance the recommendations.

The other issue, which I think has relevance and will be noticed in the future, is that the will and the desire in member countries  to put money on the table for international cooperation are beginning to decline. And the will that remains, is gradually going towards some very specific topics.

Today I see it because I handle a fairly large budget, almost 300 million dollars a year. I see that the funds come in to launch and promote international cooperation in areas that are then generating interest, such as trafficking in migrants, combating terrorism, corruption, cyber-crime … But I am not seeing any desire to give money specifically to promote health or prevention in a country like Sudan or Burundi. Fortunately, in much of Latin America, Central Asia, and Southeast Asia there is sufficient recognition of how important it is to invest national funds in these areas. But in other regions there isn’t.

These are the great challenges that the UNGASS faces that will require additional efforts. But, then, I’m positive and I see the glass as half full. Therefore, it is important that the not-so-rich countries begin to understand that to invest in health they cannot rely only on international cooperation. Countries can make internal decisions and allocate more money.

As president of the UNODC Advisory Group on Human Rights, what are the most worrisome issues on the table today? 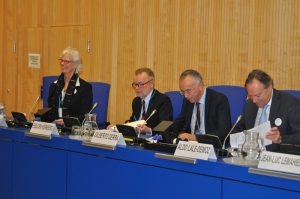 This is a very complicated issue for me. Obviously, everyone knows that we work in many countries with very serious human rights challenges. We have no mandate to enforce the Charter of Human Rights. This is the responsibility of a friendly sister agency, but I do believe that we have an obligation to promote human rights in the context of our programs. Especially those that have to do with criminal justice reform, including sustainable development, alternative development, and issues of health, prevention and treatment.

That is always a balance in which we ask ourselves “what do we do, stay here and promote human rights or just turn off the lights and leave?”. And when we come to that conclusion, we prefer to stay and do our job behind the scenes.

Right now I don’t want to boast, but we are accomplishing things in Vietnam and Pakistan. I’d like to mention that in Iran we know that right now there is a debate in their parliament, at least to reconsider the death penalty in crimes that have to do with drugs.

Of course, in the countries where we work and have programs, we are constantly monitoring and implementing a surveillance system, identifying risks, and how to mitigate them. And all that because we are eager and we prefer to achieve progress when we can.

An absolutely extreme case, which is now the Philippines, we keep insisting that we want to send an officer. The whole of the United Nations, not only the UNODC, wants an officer that works in Manila. We continue to offer substantive support for the implementation of science-based prevention programs. And we will not give in until, hopefully, they open their doors. What is going on there is a matter of grave concern.

On behalf of Dianova and as a representative of civil society, it’s a pleasure to know that people like you represent us. It’s a breath of fresh air. Many thanks!

I also would like to extend my thanks to you and to all civil society representatives for your support and for continuing to work on the front lines.  Things are definitely changing but there is still a lot to do, so, “keep pushing forward.”

Interview with Montse Rafel, Director-General of Dianova International and Lucía Goberna, Head of International Relations, held during the 60th session of the Commission on Narcotic Drugs (Vienna, 13-17 March 2017)

Mr. Aldo Lale-Demoz was born in Germany and is a Uruguayan national. He has undergraduate and post-graduate degrees in Economic Development and International Relations from The American University in Washington, D.C.  He has been working for the United Nations for more than thirty years, and for the United Nations Office on Drugs and Crime (UNODC) since 1992.

In August 2012, he was appointed Director of the Operations Division and in 2014 was appointed Deputy Executive Director of the United Nations Office on Drugs and Crime (UNODC). He supervises technical assistance programmes in 75 locations worldwide with a workforce of 2000 people. He is also UNODC Global Coordinator for HIV/AIDS and Chair of the UNODC Human Rights Advisory Group.