15 of the people sentenced to death are drug offenders. The drug problem will not be solved with more fear, join Amnesty’s call! 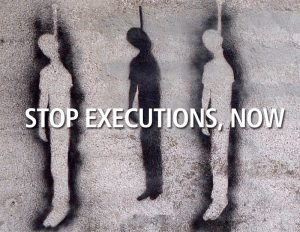 While most nations worldwide have already abolished death penalty in law or practice, over 30 countries still keep capital punishment for drug-related crimes in their laws. Although exact figures on this issue are hard to be obtained, The Death Penalty for Drug Offences: Global Overview 2015 report has shown that only few of these countries make regular use of death penalty sentencing and executions for drug offenses. Apart from China, Iran, Saudi Arabia, Malasya, Singapore, Vietnam, and most recently Indonesia, in practice, most states have demonstrated exceptional occurrence or symbolic application of the measure.

Indonesia has kept a rather inconsistent path on the matter. After a period of low execution rates between 2007 and 2012, the government resumed its application in 2013 and even stronger in 2015. Now, after over a year since last execution was carried out in the country, Indonesia has recently announced a mass execution scheduled for after the end of the Islamic Holy Month of Ramadan. It is estimated that about 15 of the people sent to the execution island are drug-related sentenced.

At the United Nations General Assembly Special Session on Drugs (UNGASS) earlier this year, the international community was categorical in calling for the abolishment of such brutal sanction. Nevertheless, the UN platform did not prove successful in gathering a consensus to end capital punishment for drug related offenses. In fact, the announcement of Indonesia’s upcoming executions took place shortly after having had its delegate booed at the UNGASS while he defended the use of death penalty as an important element of drug control policy in the country.

Truth is, capital punishment has never been proved to be more effective than imprisonment for the prevention or elimination of any crime. In drug trafficking, for instance, no statistical evidence has ever supported its deterrence. Thereby, the decision to continue with the imposition of death penalty is related to anything but justice. Most countries have already realized so. It is time the remaining dozen states that continue to apply such sanction embrace the international claim for a more humane approach on drug policies, with emphasis on the “health and welfare of humankind”.

In face of Indonesia’s recent announcement, Dianova calls on its government to join the international trend for a humane solution to the drug problem, and to consistently apply the values of Ramadan throughout its policies year-round. Moreover, we recall that more effective than the brutal enforcement of the law, are the drug prevention strategies that includes families, schools and communities, and focus on the development of people’s self-reliance and on social development. The drug problem will not be solved with more fear, but with more efforts to reduce risk factors and vulnerability conditions of the population, particularly investing in the healthy and safe development of children and youth.

We are urging him to: