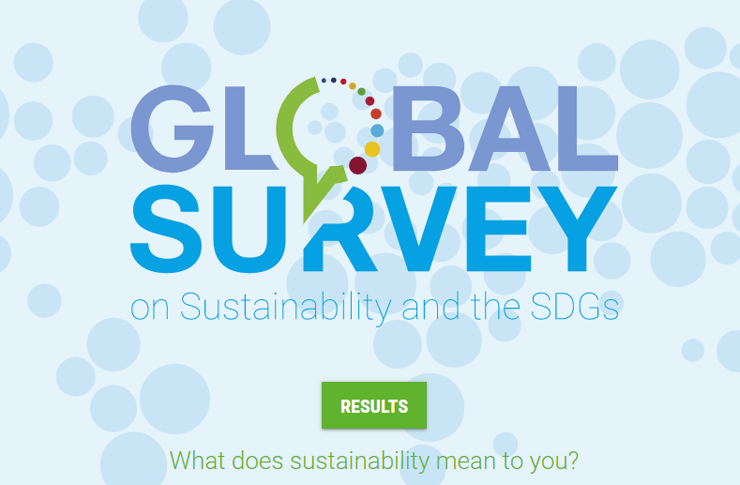 “What does sustainability mean to you?” – the Global Survey was able to reach out to approximately 27,000 participants from 174 countries – Source: website capture

In 2015, the UN General Assembly adopted the UN Sustainable Development Goals (SDGs). A lot has happened since then, but what do people perceive? And what moves them when it comes to sustainability? For the first time, these questions were the focus of a global survey, the Global Survey on Sustainability and the SDGs (Global Survey).

Between September 2018 and June 2019, the Global Survey targeted private individuals and representatives of politics, business, academia, the media and civil society both on a national and international level. The aim was to prioritize relevant topics relating to the environment, social issues and the economy in the respective countries and sectors and to establish the urgency for action. In addition, the performance of the institutions in each country has been assessed.

The Global Survey was funded by the Government of the Federal Republic of Germany (Federal Ministry for the Environment, Nature Conservation and Nuclear Safety) as part of the “Export Initiative Environmental Technologies”, and was designed and implemented by the sustainability consultancy Schlange & Co. (S&C). The Yale Center for Business and the Environment (CBEY) was commissioned as an academic partner for scientific support.

Thanks to the support of many conscious people and organizations worldwide, the Global Survey was able to reach out to approximately 27,000 participants from 174 countries in order to capture both individual and diverse professional opinions and expectations on the topic.

Respondents see all sectors as having a responsibility to promote sustainable development, but governments in particular.