Female genital mutilations can have dramatic physical and psychological consequences

By Ignacio Torres – “We are running for something that’s worth it,” was Nice Leng’ete’s desperate cry to her older sister when, at 8 years old, she fled her own female genital mutilation (FGM) ceremony organised by the Maasai tribe of Kenya. That time, both girls spent the whole night hiding under a tree.

The second time they ran away, they were beaten and they promised they would never do it again. The third time, Nice escaped alone. When she returned, her grandfather asked her to explain why she would not undergo the ritual, which is a rite of passage into adulthood and transforms girls into eligible wives. “I will never come back even if it means being a street child,” she told him. The elder, a respected member of the tribe, finally accepted his granddaughter’s decision.

Now, 27-year-old Nice is an activist against FGM, who promotes alternative rites of passage (eliminating mutilation but maintaining the celebratory tradition). “Genital mutilation is the cause of female illiteracy and early marriage,” emphasises the young woman who has helped to save more than 10,000 girls from circumcision.

Currently, there are more than 200 million women and girls who have suffered FGM in 30 countries in Africa, the Middle East and Asia, where this practice is concentrated, according to data from the World Health Organisation (WHO) and UNICEF. Every year, 3 million girls are at risk of FGM, an ancient ritual which the United Nations (UN) considers to be a violation of human rights.

The 6 February is the International Day of Zero Tolerance for Female Genital Mutilation and it is considered a priority in the Sustainable Development Goals (SDG) to put an end to this practice by 2030, the year agreed, among others, to end gender inequality.

For several decades, FGM has been part of the social-political agenda of several international agencies that seek a total ban. To that end, the measures have been aimed at urging the revision of legal frameworks and demanding greater public scrutiny about the brutal tradition, which can result in death and crippling physical and psychological consequences for the girls who survive.

This work has had some success, although there is still much to be achieved. In Kenya and Tanzania, girls aged 15 to 19 are three times less likely to suffer genital mutilation than their mothers when they were the same age. In Liberia, the government have agreed to ban this practice, but only for one year. In Sudan, religious leaders have declared that FGM is not directly linked to the Islamic faith, and more and more men from countries where it is practiced are against it. 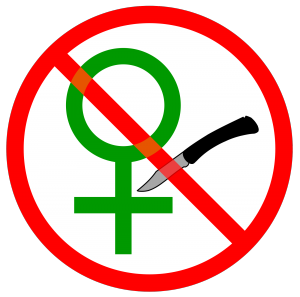 The total or partial removal of the visible tip of the clitoris, and that of the labia minora or the narrowing of it (infibulation), makes it impossible to experience sexual pleasure and causes serious hemorrhages, injury to genital tissue, fevers, urinary problems, infections like tetanus, cysts, complications in childbirth, among other health issues. In the long-term, women can suffer psychological problems (depression, anxiety, low self-esteem, post-traumatic stress disorder).

These physical and psychological consequences, as Amnesty International put it, have turned female genital mutilation into an act of violence and torture against women and children, and an abuse of human rights and gender equality. Therefore, it is essential for governments to continue to take action on the matter, with a real commitment to dialogue and action.

Meanwhile, society must be made aware of the cruel reality that is suffered by millions of girls around the world every year, and also learn that its practice is not limited to Africa, but extends to the Middle East and Asia, and even to immigrants in Spain, the United States, Canada and the Emberá-Chamí indigenous community in Colombia. Although the latter has already committed to abolishing FGM once and for all in their community.