Over 2,000 people were brought together in NY at the High Level Political Forum to review the implementation process of the 2030 Agenda 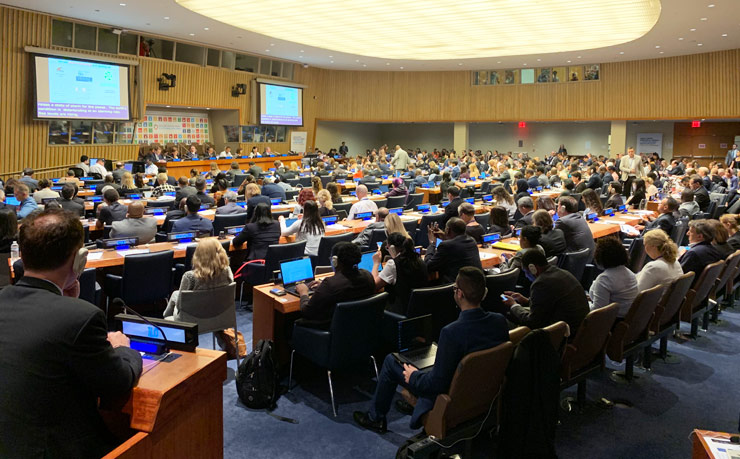 The High-level Political Forum, United Nations central platform for follow-up and review of the 2030 Agenda, provides for the full and effective participation of all States Members of the United Nations – photo: Dianova International CC

The High-Level Political Forum on Sustainable Development  (HLPF in its English acronym) took place at the United Nation’s headquarters in New York from 9th to 19th of June, gathering together more than 2000 registered participants from nations’ governments, specialized agencies and different sectors of civil society. This Forum is the principal, worldwide platform to debate and discuss issues related to sustainable development, having a central role in the monitoring and reviewing of the 2030 Agenda for Sustainable Development . The first meeting of the Forum was held in 2013 and came to replace the Commission on Sustainable Development that had met annually since 1993.

The 2030 Agenda was adopted by all the Nation States of the United Nation in 2015 and provides a shared model of development, peace, and prosperity for the peoples and the planet with a focus based on human rights. There are the 17 Sustainable Development Goals (SDGs) at the heart of the Agenda, an urgent call to action by all countries, both developed and developing, to formulate guided strategies to end poverty, increase health and education, reduce inequalities and stimulate economic growth, among others, at the same time addressing climate change and working to preserve the oceans and the forests. The SDGs are inspired by the  Millennium Development Goals  (MDGs) agreed by the nations over the period of 2000-2015, albeit with a level of ambition significantly greater in its design.

Under the theme “Empowering people and ensuring inclusiveness and equality”, in the 2019 edition of this Forum a revision was made to the implementation of the following objectives: SDG 4 (Quality Education), SDG 8 (Decent work and economic growth), SDG 10 (Reduction of inequalities), SDG 13 (Climate Action), SDG 16 (Peace, justice and solid institutions) and SDG 17 (Alliances to achieve the goals). Given that the rest of the goals were already revised in the previous editions of 2017 (SDG 1, 2, 3, 5, 9, 14 and 17) and 2018 (SDG 6, 7, 11, 12, 15 and 17), the first cycle of the Forum reached its conclusion. Furthermore, this year’s edition took the opportunity to assess the Forum’s operation as regards its work as a platform for the implementation, monitoring and review of the 2030 Agenda, as well as reflecting on the opportunities of strengthening its image in the future. Both the assessment and the report of the revision of the SDGs will be presented in the United Nations’ General Assembly next September for the approval of the Member States.

One central pledge of the 2030 Agenda for Sustainable Development is to ensure that no one is left behind – photo: United Nations/DESA, all rights reserved

As established in the 2030 Agenda, both countries and the civil society can actively participate in this Forum. On the one hand, the countries present and share their continual Voluntary National Reviews (VNR in its English acronym), directed by the states, of progress at the national and subnational level in the implementation and achievement of the SDGs. This year, 47 countries presented their national reports adding up to a total of 158 since such revisions were started in 2016. On the other hand, the different sectors of society also participated in this Forum organised in Major Groups and Other Stakeholders (MGoS, in its English acronym) with the purpose of exchanging successful experiences, identifying problems and common challenges of development and, in general, monitor compliance with the SDGs. Dianova International, as an organizing member of the NGO Major Group (NGO MG, in its English acronym) actively participated in discussions of the SDGs subject to review and in the evaluation of the reports presented by the countries alongside other NGOs.

In general, the assessment of the implementation and achievement of the SDGs at a global level was mixed. The members of the governments, experts in various subjects and representatives of the civil society agreed that, although definite progress is being made in some areas, the truth is that advancement is unequal and slow between countries and in countries and, in some cases, even regressive, so that it seems difficult, if not impossible, that the goals established in the SDGs will be reached at this rate. The necessity of a greater political commitment with respect to the SDGs and of more solid, transparent institutions is fundamental not only to leave no-one behind, but not to push anyone to lag behind in the process of development. So that the development is inclusive and can tackle systematic problems, it is also necessary to form alliances at the national level, between different levels of government, and internationally, giving greater space to the work and the voice of civil society. Working together also facilitates the sharing of human, scientific-technical and economic resources for implementing some SDGs that are interrelated and where working for one favors the achievement of the other. Finally, it is necessary to invest in information systems to have better aggregated data, quantitatively and qualitatively, in order to improve policy formulation. As was heard on numerous occasions in the Forum in the review of the different SDGs, “If you don’t count me, I don’t count“.

Are we on track to realize the global goals?