Growing up in the streets of India is no easy job, especially for girls. In Delhi, the Pardabagh Centre is dedicated to changing girls’ lives through empowering education

A crowdfunding campaign has been implemented to support the Pardabagh centre and help Indian women and girls lead a drug-free life through empowerment and education – Click here to support the campaign!

Children living at the edge of society have tough lives, especially girls. They experience inequality from the moment they open their eyes to the world. They have to face, often alone, problems bigger than themselves, such as poverty, homelessness, addiction, gender-based violence and consequent trauma, and mental health disorders.

The challenges of being a girl in India

In 2018, the Thomson Reuter Foundation ranked India as the world’s most dangerous country for women, due to the risk of sexual violence and harassment, the danger resulting from various cultural, tribal and traditional practices, and because India is the country where women are most in danger of being trafficked and coerced into forced labour, forced prostitution and domestic servitude.

In 2016, the country’s National Crime Records Bureau reported 338,954 incidents of violence against women, including 38,947 rapes, with 40% of the victims being children. This means that, in India, one women or one child is being assaulted every 6 hours. Considering that a significant proportion of cases is not reported to the authorities, the final number is probably much higher.

Street children are the most exposed to dangers, including the use of psychoactive substances such as inhalants. As per the latest report on the magnitude of substance use in India, released by the Indian Ministry of Justice and Empowerment in 2019, high prevalence of inhalant use among children and adolescents is an important concern: it is the only category of substance use where prevalence among children is higher than that of adults (1.17% vs 0.58%).

Alcohol is the most common psychoactive substance used by Indians, with about 14.6% of the population between 10 and 75 year of age using it. The use of alcohol is considerably higher among men (27.3%) as compared to women (1.6%): for every one woman who consumes alcohol, there are 17 alcohol using men. At the national level, as many as 19% of current alcohol users suffer from alcohol dependence and need urgent treatment.

Excessive drinking can lower inhibitions, impair judgement and increase the risk of aggressive behaviour. Consequently, alcohol use plays a large role in criminal activities and, in particular, violence against women. According to WHO, studies of intimate partner violence routinely identify recent consumption of alcohol by perpetrators, although estimates vary between countries. A multi-­country study in Chile, Egypt, India and the Philippines identified regular alcohol consumption by the husband or partner, as a risk factor for any lifetime physical intimate partner violence across all four study countries.

But we’re doing something about it!

The Society for the Promotion of Youth and Masses (SPYM), a member of the Dianova Network, has been working with Indian children in difficult situations since 1986. In 2016, SPYM started dedicating specific drug addiction treatment and rehabilitation services to girls and women and, the following year, inaugurated the first India-based exclusively female-oriented residential facility, the Pardabagh Centre.

Although the centre currently hosts about 40 women between 9 and 65 years old, the majority are below 18 (80%), so the services provided are adapted to them. Services include individual counseling, literacy classes, basic computer skills, art and craft classes, dance classes and practical skills training that also enhance self-awareness and self-care, such as the three-months long beautician course and housekeeping course.

“The Pardabagh Centre helps girls who do not have a family, especially those who are forced to live in the streets. I came to the centre because I was homeless and addicted to drugs, it was hard… I am so happy I could receive dance classes and art classes! Here, I stopped using drugs and I learned how to cook. Every girl should have the chance to come to the Pardabagh Centre, I want more girls like me to be helped” – Chandani, 16

Our centre has the capacity to host the children of the women undergoing treatment. Five of them are currently under our care and can gladly remain close to their mothers while they are receiving the treatment with the aim of getting their lives back into their hands.

You can join us!

Through this campaign we want to raise EUR 3,500 to boost literacy and basic information and communications technologies (ICT) classes for the girls at the centre.

EUR 3500 is the current cost of providing 6 months of classes in each subject. At Dianova International we believe that nowadays being able to use a computer and master new technologies is almost as important as being able to read and write.

For this reason we want to make sure literacy and ICT classes can be increased in 2020, while SPYM reserves its current funding to cover for the basic necessity of the Pardabagh centre, such as: 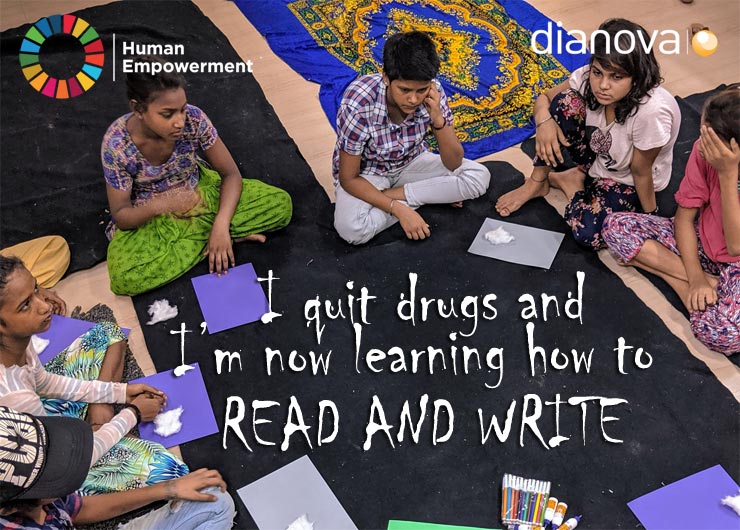