Dianova attends the Second WHO Forum on Alcohol, Drugs and Addictive Behaviours 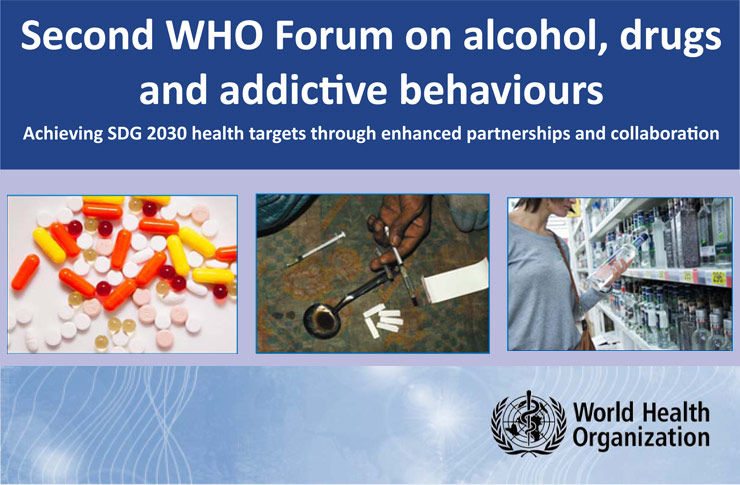 Regarding drug-related addictive behaviours, we are unfortunately 30 years behind in providing public health-based treatment programmes as compared to alcohol policies

After the success of the first forum held in 2017, WHO wished to continue promoting the collaboration and partnership between organizations, networks, and institutions who work in the field of public health, to strengthen actions aimed at reducing social and health problems associated with substance use and addictive behaviours. In a changing global context, it is imperative to move towards greater collaboration. Attendees included representatives of WHO and other United Nations agencies, such as the United Nations Office on Drugs and Crime (UNODC), representatives of member countries, numerous academic experts, and representatives of civil society.

The Forum dealt with a variety of topics, such as the implementation of policies and effective interventions, the damage to third parties that results from the consumption of substances or addictive behaviours, the commercial determinants of health, and the role of different factors in achieving the public health objectives; in addition, a review of the progress made in universal health coverage was performed.

The number of deaths due to the use psychoactive substances varies widely depending on the substance consumed; 7 million are attributable to tobacco consumption, 3 million to alcohol consumption, and between 495,000 – 585,000 to drug use (data differs between WHO and UNODC).

The speakers from WHO stressed the need to reinforce harm reduction services as a key element in containing the spread of contagious diseases. The WHO called for a greater investment on harm reduction services, and asked to have them directed towards vulnerable populations, such as the prison population. There was also a call to promote the decriminalization of drug use, and to change laws and policies to ensure that they comply with Human Rights. The problems of stigmatization and discrimination were highlighted in many of the talks as two of the main problems for the affected groups, as well as the urgent need to improve access to controlled medications. Finally, the need to improve the collection of information and to improve the involvement of civil society organizations was also mentioned by the representatives of WHO.

Among the numerous presentations, that of Thomas Babor from the University of Connecticut (USA) on “Drug Policy and the Public Good” should be highlighted (in reference to a book that has been published under the same name), where he presented the findings and consequences of different policies that have been implemented. Thomas Babor shared some reflections that seriously question drug policies implemented in some countries. As for example that “The more you look at some of the supply reduction strategies, the weaker they get”. Some of these strategies may cause temporary disruptions in drug markets, but few have an effect of reducing drug use in the long term. In addition, many supply control interventions absorb the largest drug control spending in many countries, even when the evidence supporting these strategies is not strong.

Regarding drug-related addictive behaviours, we are unfortunately 30 years behind in providing public health-based treatment programmes as compared to alcohol policies. It is also a problem that requires more attention because boom rates are observed, for example, in the addictive behaviours of the compulsive use of video games.

There were some initiatives presented that are now being carried out by the academic world such as the improvement of the criteria for the compulsive use of video games, training for treatment professionals, establishment of guidelines from which one can speak of an addictive behaviour regarding gambling and betting, and the impact of digital devices on children.

At Dianova we like to see the approach from a public health perspective of WHO as the way to continue exploring to respond to the pressing needs of the current problems of drug and alcohol consumption, and addictive behaviours. We look forward to seeing new developments especially in the field of addictive behaviour. Finally, we hope that the consensus reflected in this forum will influence the debates in other intergovernmental organizations and at the country level. 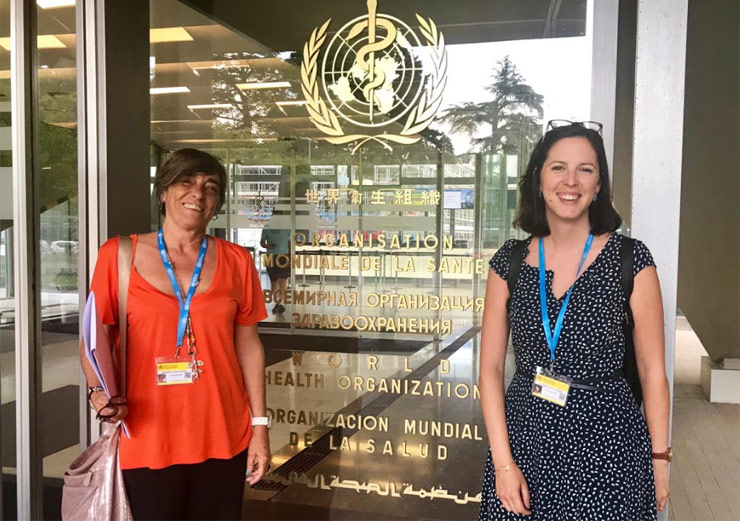 Publication of the World Drug Report

WHO’s increasingly proactive role in drug policy should be mentioned. Proof of this is the fact that for the first time this year the event to present the World Drug Report 2019 in Geneva at WHO headquarters. The dimension of the public health perspective on drugs is becoming more and more visible.

At the presentation of the report, Lucía Goberna, institutional relations of Dianova International intervened as representative of the Vienna NGO Committee (VNGOC) and therefore, as a representative of civil society. She highlighted the alarming figures of deaths related to drug use, the urgent need to reach a balance between the policies of rational use and control of medication under international control to ensure access to medication to alleviate pain and the role that civil society can play to complete the information and data collected by supranational organizations. 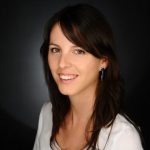