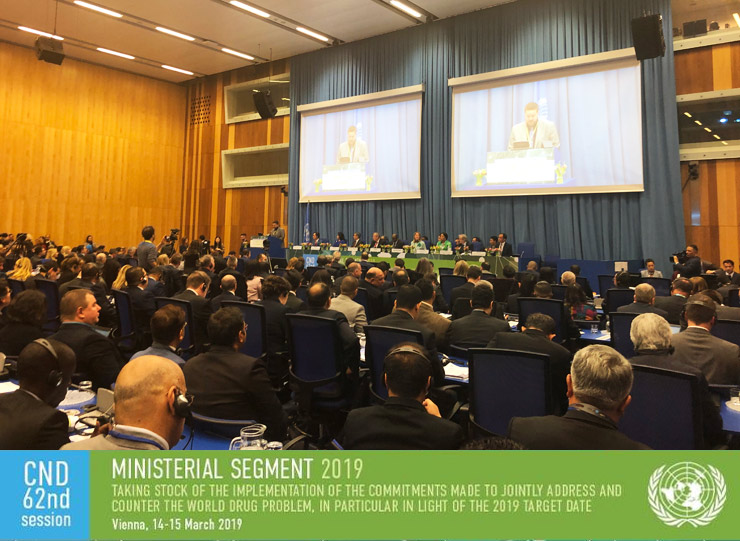 By Lucía Goberna Lehman – In 2009, a Political Declaration and Plan of Action was designed to promote international cooperation in favour of a comprehensive and balanced strategy necessary to counter the world drug problem. Together with the UNGASS agreement, these documents have set the foundations for the international community’s anti-drug programmes and actions.  Ten years later though, the time has come to review the commitments made and to analyse the consequences of the drug policies developed so far.

The Ministerial Segment of the Commission on Narcotic Drugs was organized for this purpose on March 14-15 at the United Nations Office in Vienna (Austria) with attendance from many high-level representatives, including President of Bolivia Evo Morales, Prime Minister of Mauritius, Pravind Kuma, and over 30 high-ranking officials from national Ministries of Foreign Affairs, Interior, Justice and Health of many countries worldwide.

The outcome of this meeting was the production of a Ministerial Declaration unanimously approved by all members’ representatives. The declaration draws special attention to the need to gain momentum in the implementation of the various commitments made in this field. The declaration was negotiated beforehand, during the intense preparatory sessions held since the fall of 2018.

Among the positive aspects of the Ministerial Declaration, one should highlight the reiteration of some of the pledges of the UNGASS 2016 outcome document, some of which we consider essential to further progress in this area, including that of considering the problem from a human rights-based and person-centred public health perspective.

In addition, the new political commitment recognizes the role played by civil society organizations and is committed to including them in strategies to counter the world drug problem at all levels. Likewise, we are pleased with the renewed commitment to develop and rely upon evidence-based treatment and prevention practices and to improve policies’ monitoring and evaluation through better data collection and by setting future meetings to analyse these issues.

On the other hand, although the declaration recognizes the magnitude of the drug problems (acknowledging for example that addiction treatment and other health services are still not sufficient to meet the needs), we consider that the review process should have been more comprehensive, taking into account the lessons of the past in order to prepare the future better.

The Ministerial Segment had a great representation and participation of civil society. At the opening ceremony, Jamie Bridge, Chairman of the Vienna NGO Committee on Drugs, addressed all the attendees to whom he presented the main aspects in which civil society organizations have come to agree, including the fact that most of us perceive that the world drug problem has worsened in the last decade, our consensus that the UNGASS outcome document is the most complete on this matter, our choice of public health- and human rights-based approaches, and our utter rejection of the death sentences for drug-related crimes.

Apart from the plenary session, two round tables took place to, on the one hand, take stock of the drug policies applied during the last 10 years, as well as to determine the way forward in the future. The Civil Society Task Force on Drugs was in charge of selecting among more than 80 applications, two representatives of civil society to participate as speakers and four more to contribute their views to the round tables.