After the intense negotiations that took place in previous years to agree on the Ministerial Declaration it was not expected that controversial topics or other issues would be brought up. At a conventional level, this CND has also been quieter with a number of delegates and attendees cancelling their participation because of the threat of the Coronavirus.

A total of 1,500 people from 137 countries attended the event, of whom 370 were representatives of civil society organizations, a number which is quite important. Dianova International was represented by its Director General, Ms. Montse Rafel, Lucia Goberna (Director of Institutional Relations), and Kristina Stankova (Research assistant).

Only 5 resolutions were debated about topics in various areas including: the role of youths in drug prevention, the access and availability of controlled substances to alleviate pain, and the role of the private sector to combat the world drug problem.

One of the topics about which there has been major uncertainty was the decision as to whether or not to vote to follow the recommendations of the World Health Organization to have cannabis rescheduled in the international drug control framework. Finally, after some national delegates said that there had been no time to process the recommendations, it was agreed that voting would take place at the CND session in December 2020.

It should also be mentioned that Dianova has published a written statement which is part of the session’s official documentation: “A call for a better coordination to harness the power of the media” (see below). Additionally, Dianova signed the written statement of the Proyecto Hombre Association: “treatment based on scientific evidence as an integral part of the health system“. Notably, only six written statements have been produced by civil society organizations.

This year over a hundred side events were scheduled with more than half of them being organized by civil society organizations. Dianova actively participated in three of them:

“The media, a key factor in the field of drugs” was the main event organized by Dianova, where apart from moderating it, our representative spoke of the “threats and opportunities of social networks and alternative media outlets in preventing drug use and addiction stigma, and promoting healthy lifestyles.

“Barriers to accessing treatment and recovery” – women who use drugs have to face daunting barriers in seeking and getting substance abuse treatment. The event addressed these barriers, whether generated by society or existing within treatment programmes, and how to overcome them.

“Treatment based on evidence as an integral part of the health system”, an event co-sponsored by Dianova

Panelists, during CND side event: “The media, a key actor in the field of drugs” – photo: Dianova, CC

The VNGOC is the main entity  that enables effective liaison between civil society organizations working in drug-related issues and United Nations agencies dedicated to drug policies. Dianova has had a close relationship with the committee, because since 2018 we held the same vice presidency.

Thanks to the VNGOC, 4 informal civil society discussions were organized with: senior officials of the United Nations office on Drugs and Crime (UNODC), the Presidency of the Commission on Narcotic Drugs (CND), the President of the International Narcotics Control Board (INCB), and for the first time senior officials of the Mental Health and Substance Abuse department of the World Health Organization (WHO). These are spaces where the civil society representatives posed direct questions to the representatives of the United Nations agencies. We are very proud of this discussion space given that it is not usual practice at a United Nations level to expect this degree of collaboration. On behalf of the VNGOC, Lucia Goberna oversaw the discussion with the WHO and posed questions to INCB and CND.

We also attended the first discussion session between the VNGOC members which was entitled “Finding Common Ground on Prevention”, this resulted in a very informative and participatory session and reiterated the need for relying on the continuity of services for prevention, treatment, harm reduction and drug rehabilitation.

A General Assembly of the VNGOC also took place, and there were elections for three of the six VNGOC Board officials. The formation of the new Board is as follows:

For Dianova, it has been a pleasure to be able to actively contribute over the last two years to the organization of the Ministerial Segment, and to be able to participate in the selection of numerous speakers to represent the VNGOC within and outside UNODC and to participate in the strategic development of the committee. From Dianova, we want to congratulate the new working team and look forward to them continuing to work to strengthen the presence of civil society representatives in an efficient and balanced way. 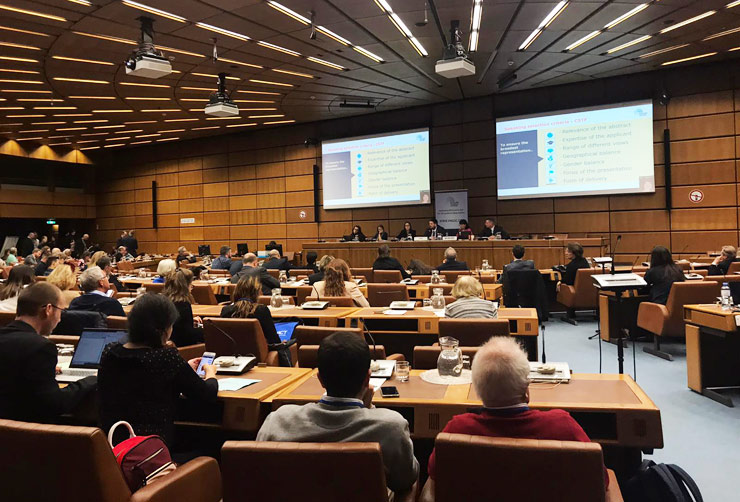 The annual General Assembly of the Vienna NGO Committee on Drugs (VNGOC) was held during the 63rd Session of the CND – photo: Dianova, CC

CND is without doubt a meeting point. Besides the many sessions that take place with CND we have been able to make the most of meeting with the European Union Delegation, as well as with members of the European Union Civil Society Drugs Forum and with colleagues of the New York NGO Drugs Committee.

Furthermore, we are able to meet with the associated members of Dianova International RIO, SPYM, KKAWF and Slum Child Foundation.

Exhibition of Dianova Chile in UNODC

An exhibition was organized during the session, in front of the second largest room, where information and photos of a good practice implemented by the Dianova Chile Foundation were included: “International Certification: Professional and Competence Updating in Residential Treatment”, as well as that of our associate member Slum Child Foundation (Kenya) with the “Smart Suburban Ambassadors” program that is based on peer interventions. It should be noted that Dianova Chile’s good practice has been published in a guide by UNODC and VNGOC: “Working Together – Drugs and Sustainable Development: A Guide for NGOs”, together with Dianova Spain’s “Early Intervention Programme”.

Without doubt it has been a very intense CND where we have had the opportunity to vindicate improvements in treatment programmes to incorporate the gender perspective, defend the community therapy model that implements minimal quality standards, calling attention to the necessity to make the most of the power of the media in a positive way in the fight against the world drug problem and to vindicate the central role in the UN’s Common Position on Drugs, in particular with reference to the issue of decriminalization of drug possession for personal use and always prioritizing the respect of Human Rights.

See you at the next CND!

View of a panel of the exhibition by Dianova Chile and the Slum Child Foundation – photo: Dianova, CC