Due to the coronavirus crisis, the CSW64 was held in a two-hour format, while civil society organizations had a voice through written statements only 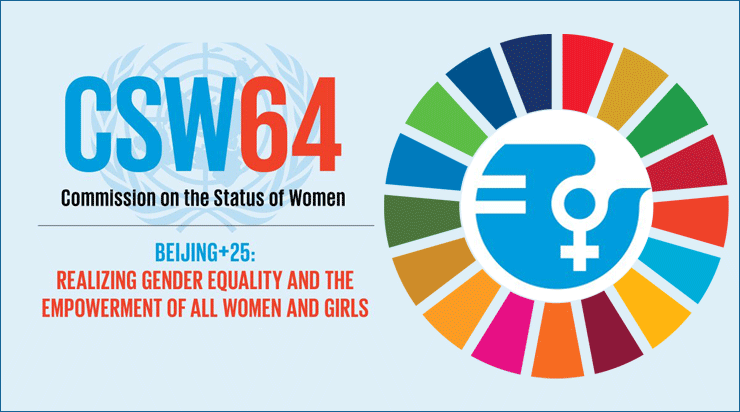 By María Victoria Espada – The sixty-fourth session of the Commission on the Status of Women (CSW64) was held on 9 March in New York City. Following the United Nations Secretary General’s recommendations on the need to avoid the spread of coronavirus disease (COVID-19), the Commission was held in a reduced 2-hour, as opposed to the traditional two weeks, with no general debate nor parallel events.

This year’s Commission commemorated the 25th anniversary of the Beijing Declaration and Platform for Action, adopted in 1995 at the Fourth World Conference on Women in Beijing, China, which are now considered the most progressive agenda for the rights and empowerment of women and girls worldwide. With no celebration whatsoever and despite the obvious disappointment of most participants, UN member states approved the CSW Political Declaration and renewed their commitments to ensure the full, effective and accelerated implementation of the Beijing Declaration and Platform for Action.

As detailed in this political declaration there is concern that overall, progress on the rights of women and girls has not been fast or deep enough, and that in some areas progress has been uneven. At this date, no country has fully achieved gender equality, and new challenges have emerged since the Beijing Declaration, adding to traditional structural barriers, discriminatory practices against women and girls, and the feminization of poverty. However, it is recognized that gender equality and the empowerment of women and girls are now decisive factors in the advancement of all the goals of targets of the 2030 Agenda for Sustainable Development and that their implementation is therefore more than necessary.

The Political Declaration also identifies specific measures to address the gaps and challenges to achieving gender equality and the empowerment of women and girls. These include: eliminating all discriminatory laws and policies; eliminating gender stereotypes, especially in the media; strengthening the effectiveness of institutions that promote gender equality; harnessing the potential of technology and innovation to promote women’s and girls’ lives; improving the analysis and use of gender statistics; and strengthening international cooperation to implement commitments to achieve gender equality and the empowerment of all women and girls.

The United Nations Secretary General, Mr. Antonio Guterres, presented a comprehensive evaluation report of women’s rights combined with global data and analysis that underpins the Women’s Rights in Review 25 Years after Beijing document published by UN Women. According to this document, to ensure that progress is accelerated and achieved, four catalysts come to the fore: support women’s women and leadership; harness technology for gender equality; ensure that no one is left behind, match commitments with resources while strengthening the policies and programmes to accelerate the promises made at Beijing 25 years ago.

The excessively small format of the CSW64 did not allow NGOs to organize side events and their participation in the official session went almost unnoticed. Yet, many NGOs made their voices heard through written statements.

Among them, Dianova International called for the need to mainstream gender perspectives in drug-related policies and programmes in order to effectively and comprehensively respond to the specific needs of women with substance use disorders. This is the only way to respect their rights while contributing also to the 2030 agenda for sustainable development and its objective of gender equality.