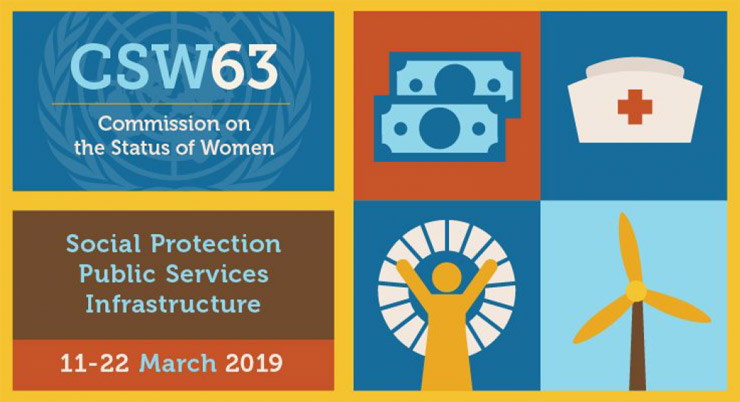 By M. Victoria Espada – The Commission on the Status of Women met last March at the United Nations Headquarters in New York for its sixty-third session (CSW63). The priority theme centred on “social protection systems, access to public services and sustainable infrastructure for gender equality and the empowerment of women and girls”.

After two weeks of intense discussions, the Commission recognised the need to accelerate progress towards the goal of universal and equitable coverage and access to healthcare entitlements and social protection mechanisms. This proposal was already recognised during the fifty-seventh session of the United Nations Commission for Social Development (CSocD57), in light of the evidence that only 20% of the global population has adequate social security coverage, and more than half do not enjoy access to any type of coverage, according to recent data from the International Labour Organization (ILO). When entitlements are tied closely to formal employment, women’s economic insecurity and the feminisation of poverty, with clear intergenerational impact, are perpetuated, as women are more likely to work in the informal economy, especially in developing countries.

Improving public services and infrastructure is also crucial to increasing the safety of women and girls. Furthermore, integrating a gender perspective into the planning of urban and rural development strategies—including housing, transport, public spaces and sanitation, amongst others—has a positive impact on the construction of more inclusive societies, whilst at the same time reducing women and girls’ exposure to violence, attacks and harassment.

A coordinated and integrated policy approach is needed—as well as increased mobilisation of domestic and international financial resources—to ensure that social protection systems, public services and infrastructure policies complement one another and are mutually reinforcing. In recent years it has become apparent that budget cuts, austerity measures, and discriminatory laws and policies exacerbate gender gaps and hinder inclusive growth. Likewise, current problems such as migration, climate change, armed conflict and post-conflict situations further increase the vulnerability, insecurity and poverty of women and girls; in some cases, these can reverse the progress that has been made.

Participants in parallel sessions to the Commission on Women, mostly representatives of non-governmental organisations (NGOs) and civil society, also revealed positives and negatives on the road to gender equality, in terms of: salaries and income; access to economic and productive resources; the participation of women in the workforce and working conditions; and the sharing unpaid care and domestic work between men and women, amongst others. In this respect, gender-based reporting and data disaggregated by sex, income, age, and other characteristics, were identified as necessary for facilitating improved monitoring of the results of policies and programmes, and to identify gaps that need closing so that “nobody is left behind”.

Sexual harassment suffered by women and girls, in the workplace and in schools, whether in public or private spaces, was also a focal point of the discussions this year. Factors such as the historical and structural unequal power relations between women and men, negative social norms, and gender stereotypes perpetuate a hostile environment and undermine the enjoyment of rights and equal opportunities. In politics, for example, sexual harassment and intimidation exacerbate the under-representation of women, reduce their contribution to the political process, and undermine democracy. Thus, a study carried out by the Inter-Parliamentary Union and the Council of Europe revealed that a quarter of the women parliamentarians interviewed had been subjected to sexual harassment by their male parliamentary colleagues, from both their own and opposing political parties.

One year later, the unanimous message from the diverse discussions that took place at the CSW63 was loud and clear: if gender equality in the broadest sense is ignored, we will not be able to achieve the 2030 Agenda’s Sustainable Development Goals (SDGs). For development to be sustainable, human rights have to be recognised, protected, and respected. Nobody can or should be left behind.