XXIII Ibero-American Seminar on drugs and cooperation: drugs and dependences, civil society and drug policies in the pandemic context and in the framework of the 2030 Agenda 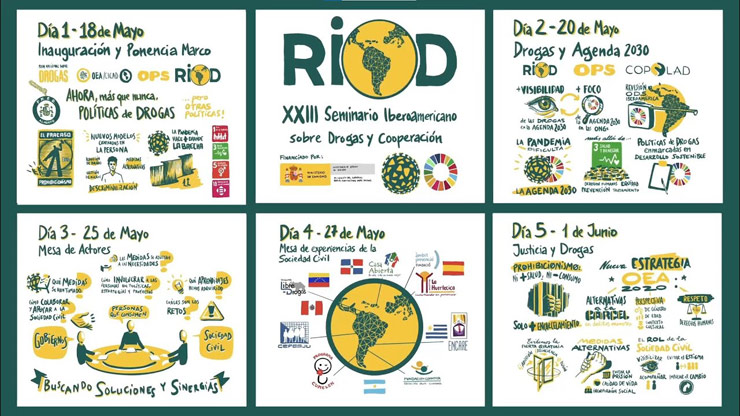 “Inclusive programs based on community work, as opposed to imprisonment, as well as the promotion of healthy lifestyles and healthy leisure, as opposed to the persecution and punishment of drug use, are policy alternatives that all countries should explore” – image XXIII  ‘Drugs and Cooperation’ seminar by RIOD

By Lucía Goberna and María Victoria Espada – RIOD’s 23rd Latin American seminar on drugs and cooperation commenced with an excellent lecture by Milton Romani, entitled “moving towards a post-pandemic future: now more than ever, drug policies.” Milton Romani, an international expert on drugs and addictions from Uruguay, is an eminent figure in international drug policy and has always stood out for his consistent and clear discourse. On this occasion, he focused on how strategies to confront COVID have not been an attempt to get rid of the virus, but have constituted damage limitation strategies which have been pursued to deal with the limitations on human power and in the scientific and administrative spheres. This parallelism is especially important in a context in which damage limitation remains, unfortunately, a taboo expression in some international drug policy contexts.

Harnessing the capacity of civil society

In order to pursue the aim of making access to health a right and to mitigate the impact of economic and social determinants on health (which includes mental health) we need a responsive state and the support of science and civil society. Milton Romani reflected on the strength of the community and how this resource has not been exploited by governments for the prevention of the pandemic on the ground, without this entailing a delegation of the State’s own responsibilities to civil society bodies.

Towards a human rights-based perspective

Given the world drug situation, which is fraught with increasing complexities and inequalities, the United Nations Office on Drugs and Crime (UNODC) itself has admitted that the responses are inadequate and that significant changes are needed in drug policies which demand a deep international debate.  Milton Romani’s words, which are always encouraging and spoken in earnest, encourage us to work towards drug policies that are more aligned with the public health and human rights perspective.

Aligning drug policies with the 2030 Agenda

Also interesting was the “Drugs and the 2030 Agenda: framing drug policies within sustainable development,” session, in which a study conducted on drug policies in Latin America and their alignment with the Sustainable Development Goals (SDGs) of the 2030 Agenda was presented. Although the conclusions indicate that with or without the pandemic, the quantitative targets of the SDGs will not be achieved in Latin America, the qualitative aspect of the Agenda remains valid.

Due to its human rights-based approach, the 2030 Agenda facilitates the framing of addiction topics in the context of a psychosocial approach and the fostering of spaces for the discussion of new drug policies.

For Javier Sagredo Fernández, Director of the COPOLAD III program, the 2030 Agenda is a great achievement because it is a result of an international agreement on the idea of development with a universal, comprehensive and transformative spirit. He emphasized the need to draw up drug policies that are consistent with other public policies for sustainable development, to make them inclusive so that nobody is left behind, and to evaluate them according to the SDGs.

Regarding the role of civil society in development, his vision was clear: “influence or die.” Without a doubt, civil society is responsible for “mobilizing, informing, advancing and raising awareness.” As noted in the session, the 2030 Agenda can lead to the emergence of new alliances and networks within civil society in order to expand democratic governance through a greater capacity for decision-making and the voicing of concerns.

In the “civil society in action: good practices to address the socio-health emergency and post-pandemic scenarios” session, different initiatives run by organisations present in Latin America and Spain were unveiled. The common features among them were the flexibility and speed of the organisations for adapting to the new situation caused by COVID-19, as well as the effectiveness of the virtual communication strategies between the beneficiaries and their family members. The interventions during the pandemic were multi-disciplinary and person-oriented in general. In some cases, community-based treatment and the building of connections and networks enabled the continuity of the programmes.  Many organisations took advantage of the pandemic to implement parallel cultural, entrepreneurship and health workshops, amongst others, with notable results.

The keys to success: anticipation and networking

Among the success factors mentioned was the fact that the centres were prepared for the measures imposed by the district or government due to COVID-19, as well as the coordination between the work teams and the search for synergies. Also important were: collaboration with different public bodies, coordination with social services, cooperation with other organisations and virtual networking. On the other hand, areas for improvement arising from the new situation were detected, such as increasing the number of community operators and coordinating therapeutic processes with other personal beneficiary interests. Investment in professional and team training and the creation of informal communication spaces among its members to talk about their fears, concerns and welfare were also identified as necessary.

The last session of this seminar was called “Justice and Drugs: Rethinking criminal justice and the prison system in collaboration with the addiction care network.” Antonio Lomba, Head of the Institutional Strengthening Unit of the Inter-American Drug Abuse Control Commission (CICAD), reiterated the need to train justice and health professionals on addictions so that they can understand the full extent and complexity of the problem. “By analysing the underlying causes, alternatives to imprisonment can be drawn up with a human rights approach,” Antonio said.

Promoting healthy lifestyles rather than punishing

Similarly, judge Carmen Martínez said that the drug regulations remain essentially prohibitionist and punitive, both in terms of possession and trafficking. At an international level, the goals of reducing drug use and avoiding public health problems have not been achieved. At a national level, traditional ways of addressing the drug problem have created even more problems than solutions. For Carmen, inclusive programs based on community work, as opposed to imprisonment, as well as the promotion of healthy lifestyles and healthy leisure, as opposed to the persecution and punishment of drug use, are policy alternatives that all countries should explore.

We at Dianova would like to congratulate RIOD for the interesting and well-organised seminar in which some excellent speakers participated. It has left us with such eloquent and inspiring conclusions as shown below…