About 2,400 people from 140 countries attended the 62nd Session of the Commission on Narcotic Drugs and the Ministerial Segment, with a high level of participation of civil society organizations 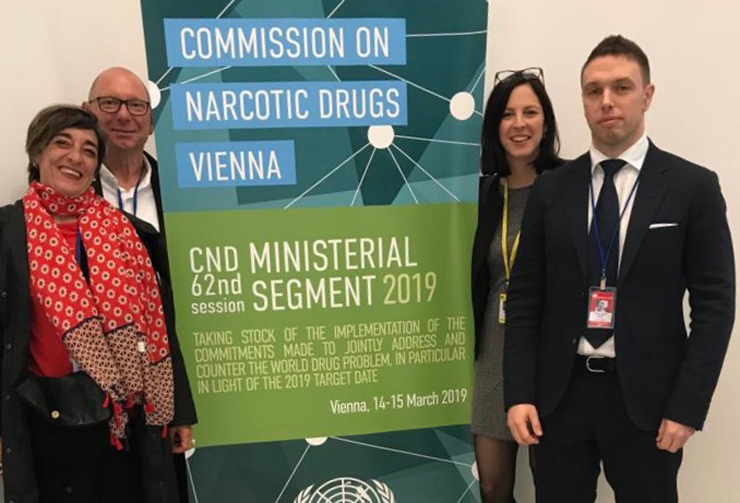 By Lucía Goberna Lehman – The 62nd annual session of the Commission on Narcotic Drugs (CND62) was held from March 18 to 22 and the Ministerial Segment  took place on March 14 and 15, with an increased level of participation compared with last year’s. Throughout the CND regular session, no fewer that eight resolutions were passed on topics ranging from measures to prevent HIV in female drug users, to improve the control of drug precursors, alternative development or to improve the member states’ estimates on their need for internationally controlled substances for medical or scientific use.  Moreover, approximately 100 side events were organized by member nations, intergovernmental and international agencies, civil society and the academic community.

One should mention the role played by Dianova in two side events. In the first one, Kenneth Arctander, one of our representatives at the CND, presented the recommendations of the #QuitStigmaNow campaign to help reduce addiction-related stigma within health services, the media and in the workplace. Under the title “Addressing stigma: continuing the discussion” the event was organized by the governments of Uruguay, Canada, Estonia and Norway, and the United Nations Office on Drugs and Crime (UNODC), among others.

“Evidence-Base Treatment and Therapeutic Communities as an Integral Part of the Health System”. Dianova co-organized this important event where a study by the NGOs, Proyecto Hombre España (Spain) KETHEA (Greece), endorsed by the United Nations, was presented. This study concerned the positive development of those who have received treatment in therapeutic communities. Dianova International’s representative, Lucía Goberna, spoke as the Deputy Chairperson on the Vienna NGO Committee on Drugs (VNGOC), highlighting civil society’s demands to develop scientific evidence-based policies and practices.

During this period was also held the annual general assembly of VNGOC, with the organization of elections for half of the positions on the board. Dianova’s role as Deputy Chairperson will not be put to a vote before 2020. The Strategic Plan 2019-2021 and current budgets were approved. Also, a debate about the future organization of the VNGOC was held. We congratulate the new VNGOC Board:

The smooth organization of the meeting, which was followed by a members’ dinner with more than 60 attendees, was noteworthy.

Moreover, following on with the tradition, the VNGOC held informal dialogues. These are sessions whereby members of civil society can raise concerns directly with the Executive Director of the United Nations Office on Crime and Drugs and Crime, Mr. Yury Fedotov; President of the International Narcotics Control Board, Mr. Viroj Sumyai; Chairperson of the Commission on Narcotic Drugs for this period and Sudan ambassador, Mirghani Abbaker Altayeb Bakhet; Facilitator and Nigerian ambassador, Vivian Okeke; and the secretariat of the Commission on Narcotic Drugs.