The number of people in treatment has increased dramatically, reducing AIDS-related deaths among adults and children. However, the number of new HIV infections remains at a worrying level. 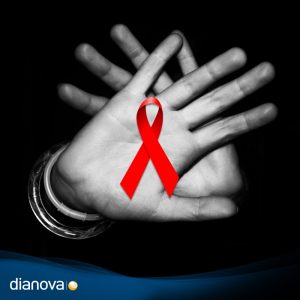 As every year, we celebrate World AIDS Day on December 1st. This day aims to raise public awareness of the AIDS pandemic, to galvanize political will to improve prevention services and access to treatment, and to support people living with HIV/AIDS in their everyday life.

This year’s World AIDS Day campaign revolves around the message “Hands Up for #HIVPrevention” and aims to emphasize the different aspects of HIV prevention, including the need to invest massively in effective prevention services; the need of targeting key populations and their sexual partners; and that of ensuring access to pre-exposure prophylaxis (PrEP)[1] for people at risk.

As it is also the case every year, a few days before World AIDS Day, UNAIDS prepared an epidemiological assessment of the HIV situation at the global level, which makes it possible to prioritize objectives. The United Nations “Get on the Fast Track” strategy happens to be working: the UNAIDS report points out that 18.2 million people now have access to HIV treatment, which contributed to reducing AIDS-related deaths among adults and children.

Unfortunately, these good results have been tempered, over the past five years, by the stabilizing number at a high level of the overall number of new HIV infections in adults and even by an increase in new infections in some regions of the world. 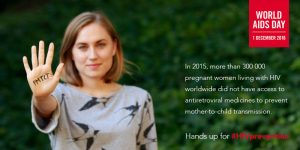 More than two million people become HIV-positive each year. This number is far too large and makes it difficult to reach the objective of reducing the annual death toll to fewer than 500,000 and the new infections to fewer than 500,000 each year by 2020. To respond to this enormous challenge, UNAIDS has not only placed the World AIDS Day campaign under the sign of prevention to highlight its commitment in this matter, but more importantly the UN agency decided from now on to focus on the life-cycle approach.

According to Michel Sidibé, UNAIDS Executive Director, people are not vulnerable to HIV in the same way, whether they are children, adolescents, adults or even older. This vulnerability also depends on each person’s sex and where they live.

“Because it aims to find solutions tailored to each person according to each stage of their lives, the life-cycle approach makes it possible to respond to the complexity of HIV. Risks and challenges evolve throughout life and it is therefore necessary to adapt HIV prevention and treatment strategies from birth to old age.” 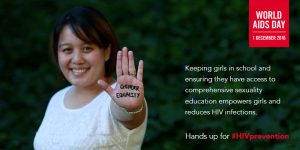 Youth empowerment is one of the key elements of an effective response to the AIDS epidemic. It is especially important to better target adolescent girls and young women living in the countries most affected by AIDS: in 2015, nearly 7,500 women aged 15-24 years have been infected with HIV every week, the vast majority of whom were living In sub-Saharan Africa.

Michel Sidibé emphasizes that puberty is the most dangerous moment in life, especially for girls: “These young women face a triple threat: they have a high risk of HIV infection, they have low rates of HIV testing , And have difficulties accessing and adhering to treatments.”

According to the UN agency report, women’s and girls’ heightened vulnerability to HIV goes far beyond mere physiology: it is intricately linked to entrenched gender inequalities, harmful gender norms, and structures of patriarchy that limit women and girls from reaching their full potential and leave them vulnerable to HIV.

Across the life cycle, the absolute risk of HIV infection often peaks in adulthood (ages 25-49 years), especially among men. Men represent 35% of new infections between 15 and 19 years of age, and 63% between 40 and 44 years. However, far from being the death sentence HIV once was, it has become a manageable chronic disease when treatment is available, which is why a very large number of people will age with the virus. According to the UNAIDS report, the number of people aged 50 years and over living with HIV in low- and middle-income countries is expected to soar to 6.9 million by 2020 – a 47% increase – if global treatment targets are reached.

Yet there is a downside to the remarkable effectiveness of treatments: as people living with HIV get older, they are more susceptible to the adverse effects of antiretroviral therapy and they are at increased risk of developing age-associated diseases, which may worsen HIV disease progression.

. In high-income countries, people living with HIV aged 50 and over may presently have up to five times the risk of chronic disease, notably cardiovascular disease and geriatric syndromes — even among people who have consistently sustained viral suppression. This is already a reality in developed countries and will soon be in other countries, which in the years to come will pose a huge financial and health challenge.

The number of children in treatment has doubled

To conclude on the good news, the number of children on antiretroviral therapy globally has doubled over the past five years, reducing AIDS-related deaths among children by 44%. The global plan implemented in 2011 has contributed to galvanize global and national political will and action. Global coverage of services to prevent mother-to-child transmission of HIV increased dramatically, from 50% to 77% over the past five years, which helped to reduce HIV infections among children by 51%.

It seems that the world is nearly on track to reach the targets to reduce mother-to-child HIV transmission. Yet significant efforts still need to be made in several countries, in particular to routinely offering HIV tests to pregnant women, and to supporting mothers living with HIV to adhere to their treatment during breastfeeding.

[1] Pre-exposure prophylaxis or PrEP is a preventive treatment consisting of the use of Truvada®, an anti-HIV drug recommended by WHO to prevent contamination in people who are highly exposed to HIV and who do not use condoms 2015, only 60,000 people benefited from this treatment out of an estimated population of 3 million).