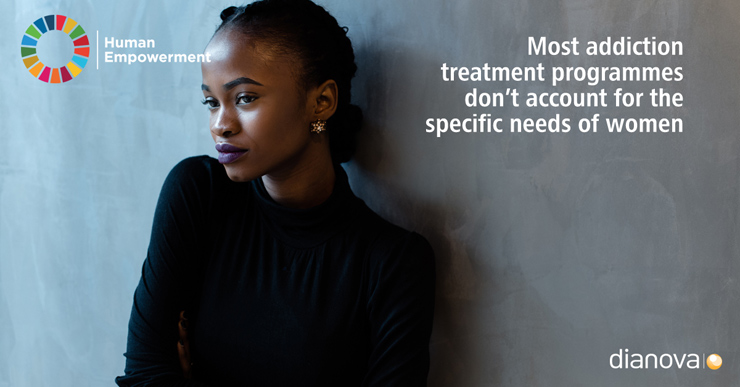 Over the last decades, alcohol and drug-related disorders have spread dramatically and no nation remains immune to their considerable human and economic costs. Although rates of substance use disorders seem to be higher for men than for women, the physical and mental consequences can be more profound for the latter.

The prejudices and social stigma associated with female drug users delay the treatment process. On the one hand, they are pointed out for being drug users or having an addiction problem and, on the other hand, for not fulfilling the gender-related roles that are expected from them (double stigma). When they try and face such situations, stigma affects them to a greater extent. Addiction treatment programmes are generally grounded in an androcentric perspective that does not meet everyone’s needs, and engendering obstacles to treatment. For this reason as stated by the United Nations Office on Drugs and Crime, women account for only one out of five people in treatment for drug use.

When it comes to substance use and addiction, women face unique issues that are mostly influenced by sex (differences based on biology) and gender (differences based on culturally-defined roles for men and women). Among other issues, research studies on substance use and addiction disorders in women have found that (source: National Institute on Drug Abuse):

Women also suffer disproportionately from the impact of repressive drug policies. Women in Europe, Asia and Latin America are imprisoned at a disproportionately high rate for non-violent drug offences. Frequently these women are in situations of extreme poverty, have low levels of formal education and limited prospects in the licit economy, with instances where women, particularly from ethnic minority communities, are coerced into participating in the illicit drug market.

In Eurasia, a number of non-governmental organizations have documented repeated police brutality and sexual abuse against women who use drugs. To address the disproportionate impacts of repressive drug control policies on women and ensure the achievement of Sustainable Development Goal number 5, it is essential to mainstream a gender perspective in drug treatment and prevention programmes and develop alternative drug policies grounded in gender equality and women’s empowerment.

Women who use drugs also face significant stigma, hindering their access to health and social services. Treatment for substance use disorders targeting women may progress differently than those targeting men.

It can be hard for any person with substance use disorders to quit, but women in particular can be afraid to get the help they need because of the fear of being stigmatized and considered deviant persons for not having been able to fulfill the roles – of wife, mother and family nurturer – traditionally expected from them. In addition, women encounter specific structural, social and personal barriers to treatment when pregnant or after pregnancy due to possible legal or social fears and lack of child care while in treatment. Women in treatment often need support for handling the burdens of work, home care, child care, and other family responsibilities, but they most often do not receive this support and have to leave treatment, not because of lack of motivation but because of the strong societal pressures to take care of others.

Most studies and research related to substance abuse are still carried out with a predominance of male participants. In addition, research studies carried out on substance use among women mostly focus on pregnancy, the negative impact on their children, and infectious diseases, a situation which appears to be somewhat stigmatizing and reductionist in nature. Recent research however showed significant differences between men and women as to substance-related epidemiology, social factors, biological responses, progression to abuse and addiction, medical consequences, co-occurring psychiatric disorders, and obstacles to treatment entry, retention, and completion.

The issues of women’s barriers to accessing addiction treatment programmes, the stigma associated with their condition and their need of specific treatment modalities have been widely unrecognized and underfunded. There is an urgent need to rethink addiction treatment programmes and implement services that effectively and comprehensively address the specific needs of women with substance use disorders. In addition, we believe that the highest priority should be given in sensitizing the public opinion and health professionals into providing women with the same standards of treatment men are entitled to.

Dianova International advocates the implementation of specific treatment programmes for women with substance use disorders, and for the introduction of gender-sensitive modalities within existing programmes, including integrated treatment programmes that offer such services as addiction treatment, parenting counselling, service linkages, housing, legal assistance, and job and vocational training.