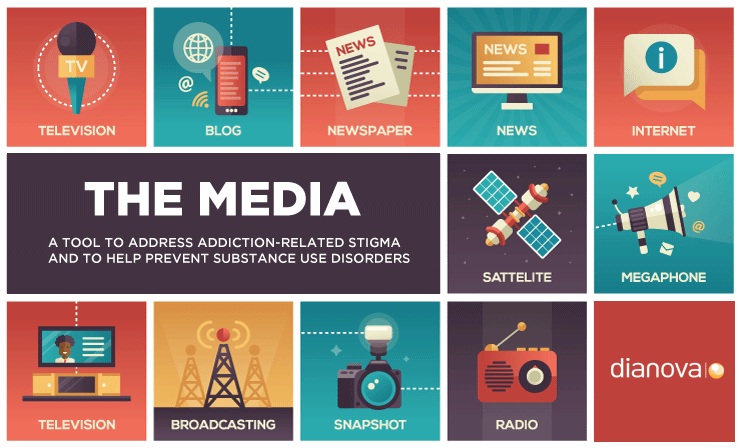 The media: a tool to address addiction-related stigma and to help prevent substance use disorders

The media has a strong influence on numerous aspects of society including public perceptions of social problems and public policy. Illegal drugs have been stigmatized in the media for decades using particular narratives, stereotypes, biased language, and rhetorical practices that have contributed to fostering discrimination against those with substance use disorders, eventually leading to the social construction of drug use as deviant behaviour.

Many newspapers, magazines, talk shows, movies, and television dramas usually depict this or that substance as instantly addictive, and sure to bring about a world of violence, depravity, and economic or social ruin in its wake. Evidence-based approaches to substance use disorders receive but little attention from mainstream media while even the best-intentioned among those only perpetuate such common misconceptions as the need to hit “rock bottom” before accepting to undergo a treatment programme, or the necessity to use confrontational techniques based on “tough love”.

In addition, studies analyzing the content of news and popular media have shown that the vast majority of individuals with substance use disorders depicted in the media exhibit deviant or abnormal behaviour. In contrast, very few stories or television programmes portray individuals who undergo successful treatment for substance use. In turn, other research has revealed that public attitudes about people affected by health and social problems are strongly influenced by media depictions of specific individuals who exemplify said problems, suggesting that such depictions may add to widespread stigma and discrimination.

When addressing drug- and addiction-related news, mass media sources tend to take a negative, moralizing stance that does little more than feeding a social imaginary in which people with problematic uses of alcohol and other drugs are treated like less than nothing, or at best, considered as socially deviant characters. Needless to say, using this tone has no influence whatsoever in preventing substance abuse.

The media is a mirror of a society that has never ceased to stigmatize those who use illegal drugs, predominantly using two types of narratives. The first one is the representation of drug use in the context of crime, enforcement and criminal justice.  News stories about drugs are frequently also crime stories filled with violence, public disorder, poverty or trafficking, but leaving aside the public health perspective and the social and psychological aspects of the problem.  The second narrative is based on the depiction of the supposedly inevitable and devastating consequences of drug use on an individual and their immediate environment. As a result, public antipathy towards people who use illegal drugs is fuelled, with the effect of dehumanizing them and implying that their use of substances is the defining feature of their character.

In addition to the mainstream media, nowadays social media and non-conventional media also plays a key role in people’s lives, especially among adolescents and young adults. Misleading and incorrect information can circulate, building fake expectations, lowering the perception of risk of drug consumption and even leading to dangerous misuse of drugs, as a large proportion of adolescents use social media to express themselves and to find what they think is reliable information.

The social media platforms have a growing importance in people’s lives, especially the adolescents, since they are the places where they “showcase” their living experiences, enabling identity expression, exploration, and experimentation. As a result, kids spend hours on various social media accounts, which may improve their social standing, but at the same time compel them to do things they should not to. This new, digital peer pressure can be damaging: according to a study conducted by the National Center on Addiction and Substance Abuse at Colombia University teenagers who regularly use popular social media outlets were more likely to drink, use drugs, and buy tobacco than adolescents who either did not use social media or used them less frequently.

Yet, despite the grim picture that has been painted so far in this article, it should be emphasized that both mainstream and social media could also play a major role in promoting healthier lifestyles and health education.

The media could also help to prevent all sorts of addictive behaviours, including drug and alcohol misuse, reaching hidden populations, promoting the principle of the right to health, and helping reduce stigma toward people who use drugs.

For example, the power of traditional media sources could be harnessed to meet the latter objective by entering into partnership agreements with NGOs or government entities. Media outlets could commit to focusing on some aspects of the issue that are rarely addressed, or to using only appropriate vocabulary when talking about substance use and addiction. As we all know the language used when referring to people who use drugs can have a tremendous impact on how they view themselves and how they are viewed by others. Using such words as “addict” or “former substance abuser” is endowed with a negative charge that contributes to prevent those concerned to seek help or resume their lives with a certain degree of normality.

A number of experiences have been conducted thus far to try and help journalists and opinion leaders provide accurate, humane, and scientifically-grounded information about addiction-related issues. These experiences usually offer expert sources and fact-checked information on news and controversies, as well as toolkits designed to help journalists avoid stigmatizing language and outdated stereotypes, and debunk the myths and misconceptions about harm reduction services and other issues.

Developing these partnership agreements may encourage the media to provide better quality information about alcohol and drugs and those who use them, and promote more awareness and understanding of the day-to-day experiences of those with substance use disorders.

Web 2.0 applications allow users to do more than just retrieve information – they emphasize interconnectivity and interactivity. This is why social media platforms also have an enormous potential as a tool for preventing and treating substance abuse problems, addressing addiction-related stigma, and reaching out to people with addiction problems. For example they could be used to build peer-to-peer substance use prevention among young people based on the premise that youth would respond positively and engage with prevention messages disseminated by their peers in a language they understand. Lastly, in recent years researchers have developed social media-based methodologies and algorithms designed to advance the scientific understanding of substance use or improve the treatment and prevention of behaviours related thereof. There are many ways to take advantage of this potential.

The media is an important part of our lives, yet we still don’t know how to use it for the common good. We thus call on United Nations authorities, Member States, and other stakeholders in the field of addiction treatment and prevention, to coordinate their efforts and to reflect on the opportunity of building on the capabilities of social and mainstream media to develop efficient tools for prevention and health promotion objectives and for putting an end to stigma and discrimination towards people with substance use disorders.