Dianova International is a network of NGOs present in the Americas, Europe, Asia and Africa. We contribute to the development of people, communities and organizations through different programs in the social and humanitarian fields. In the opportunity of the 61th Session of the Commission on the Status of Women, Dianova calls upon states to address women-specific vulnerabilities in the design and implementation of programs and policies on migration, specially but not exclusively, in face of the current flow of forcibly displaced people.

Migration has historically been a source for development: cultures, economies and societies around the globe have benefited from the exchange of people for centuries. In big cities like London, Sydney and New York, for instance, migrants represent over a third of the population while in Brussels and Dubai they account for more than half (World Migration Report, 2015, International Organization for Migration).

These numbers show that migration was already a strong reality before this current major displacement crisis. Yet, even then, states’ resistance to grant rights and protection for this population persisted – since 1990, only 48 countries ratified the International Convention on the Protection of Rights of All Migrant Workers and Members of Their Families, none of them from the European Union or any other major reception country in the north hemisphere.

With the current record number of people forcibly on the move, this situation intensifies. We are now testifying governments and societies systematically closing their doors, borders, and eyes to women, girls, men and boys whom, to survive, were given no option other than flee their homes and everything else they once knew and had.

In this context, some states have attempted to limit their ability to search for survival, and have punished them with imprisonment and institutionalized xenophobia, for something of no fault of their own. Others, by denying them protection, have allowed for labour exploitation and other forms of abuse to happen in their territory. In the general picture, until now it has been chosen the path of human cost instead of exploring the human capacities.

The evidence of the terrific situation refugees and internally displaced people are facing these days are bursting before our eyes on news, social media, and official reports. It hasn’t been easy for anyone, but it has been particularly hard for women and other minority groups. Pre-existing forms of vulnerabilities reach appalling magnitudes to women in conflict zones and when they are forced to move. Violence, human trafficking, sexual exploitation and assault, abuse, discrimination and neglect are added to the already critical pile of challenges shared by all people on the move, in temporary settlements, refugee camps, and reception centres, in their own or foreign country. 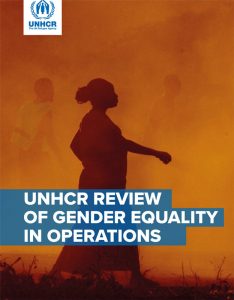 The latest UNHCR Review of Gender Equality in Operations, 2016, has shown similar conclusions to what we have acknowledged in Dianova’s International Protection Centres in Spain: that despite the existing efforts targeting women and girls in these contexts, the need to invest in their protection and empowerment is still extremely high. According to the report, women face extra layers of barriers to find sustainable income-generating activities.

Additionally, culturally imposed gender roles prevent women from assuming leadership positions and often exclude them from participating in programming design and implementation. Likewise, they lack access to sanitary materials and to sexual and reproductive health care and they are often denied the legal right to work, which results in higher exposure to abuse and exploitation. UNHCR also alerts that sexual and gender-based violence are often aggravated in displacement contexts

Accordingly, there is an even greater need to invest in gender equality education for all and other preventive measures, and to provide for adequate protective and responsive mechanisms for women and girls survivors of violence.

In Spain, Dianova manages various programmes for asylum seekers and beneficiaries of international protection and their families. The 2-phase humanitarian assistance programme is based on a personalized integration plan, with individualized assessment and tailored to the specific needs of each person.

This model is particularly valuable for women and girls, as it thoroughly addresses cultural and social barriers to women’s empowerment. The programme’s first phase centres on strengthening beneficiaries’ personal development, preparing them for the new environment, the local cultural norms and its democratic values. The second phase focuses on their integration and empowerment, investing in professional trainings, language skills, and education.

Dianova has found it acutely striking to overcome the obstacles and secure safe jobs for women in the programme. Cultural differences, including restrictive gender-roles, religious practices, lack of education and household responsibilities, often limit their career possibilities.

To this account, Dianova secures formal education for all children in the programme, provides capacity building trainings for women, supports self-employment activities, and engage the private sector to guarantee job opportunities and a safe working environment for women, respectful of their cultural backgrounds and the differences that it entails.

Key recommendations for women’s protection and empowerment in displacement context:

Based on experience and shared lessons, Dianova International finds it imperative for women’s security and empowerment that member states address, and support civil society in addressing, the root causes for forced migration in national and international levels. In addition, we call on member states to follow these recommendations, so that every woman on the move is entitled to the same rights that should be guaranteed for every woman, everywhere: