The Committee on Migration’s Subcommittee on Xenophobia and Inclusion produced an infographic which depicts  the inaccuracies and misperceptions of the prevalent xenophobic attitudes towards refugees and migrants. The infographic defines xenophobia, refugees and migrants, and then explores common myths about their impact on communities, dispelling those myths with evidence of actual realities.

This is a theme that crosscuts many of these facts and is so often overlooked: Migrants and refugees are not agents of consumption that take from their host countries without contributing anything in return. They are in reality, contributing members of society, who wish to work, pay taxes, and integrate into their new communities.

The economic impact of migration is not the only issue concerning the native population in host countries. The unprecedented rise of migrant and refugee populations in this century has also given rise to several myths regarding the nature of migration, the fear of imposition from different cultures and religions, and an association of “the other” with danger.

In an attempt to demystify some of these beliefs, the infographic shows how incredibly unlikely it is to face an act of terrorism by migrants and refugees in one’s community – you are in fact much more likely to be struck by lightning or to be hit by an asteroid. Some common risks of death like car accidents and cancer, for instance, could also be mentioned as posing much more of a threat to a human’s life than sharing a country or community with a migrant or a refugee.

At the same time, while many people may think that migrants are a synonym for “trouble”, “violence” and “illegal activities”, according to the US Department of Justice, in 2014 the number of non-citizens among the US prison population accounted for only 5%.

The intention behind the infographic is to eliminate the fear associated with migrant and refugee communities and to replace it with evidence-based facts. Because the real danger to our societies is the spread of inaccurate information that demonizes and isolates whole communities of vulnerable people.  Thus, with a positive break in the middle, the infographic reminds us that some of the most desirable cities to live in and to visit, cities that calls on the world’s attention and admiration are, coincidently or not, those with diverse, multicultural populations – after all, sharing and mixing up different cultures, food, music, art, religious, and ethnicities seems to enrich societies and creates the floor for the exciting and interesting.

Moving forward with the discussing on shared responsibility between host countries, we made a comparison between the GDP of some sample countries in relation to the amount of refugees they are taking in during the current crises. As a result, the graphic highlights the inequitable and disproportionate distribution of responsibility sharing for refugees worldwide, with countries with much smaller GDPs hosting the vast majority of the world’s refugees population, despite fewer resources, while wealthy economies continue to excuse themselves from getting really involved in the solution.

Countering the narrative that refugees should just “go home” or “go back where they came from”, we pulled out some recent data from the United Nations that reminds us the unspeakable dangers faced by refugees in their home countries. It reminds us that they are on the move by force, not by choice, and that over half of the world’s population escaping war and conflict zones are actually children, who otherwise would be at the risk of critical danger back home.

Finally, we hope this infographic can be used by individuals like us, by organizations, corporations, schools, public and private offices, online and offline, as a tool to fight xenophobic narratives. We hope this compiled data can give us some extra elements to confront myths with facts when discussing the inclusion and integration of migrants and refugees with our families, friends, colleagues, and whomever. Let us all come together as allies to migrants and refugees in our communities, through awareness raising and solidarity. 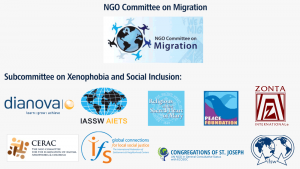 A civil society platform to encourage the promotion and protection of migrants and refugees' human rights, representing over 50 organizations, including Dianova